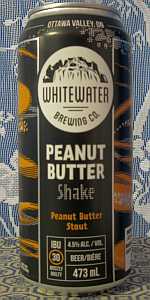 You would expect a beer modelled after a peanut butter shake to be super rich and creamy. This beer doesn't live up to that expectations. It has a flat texture and a light mouthfeel. On a positive note there is a nice taste of toffee and hazelnut in the mix, but the caramel tastes and peanut tastes taste of extract. The peanut taste reminds me more of unsalted dry roasted peanuts than peanut butter.
This beer earns a C-

Pours chestnut-brown with ruby red highlights - very dark, not quite opaque. Seated atop is nearly one finger of bubbly, frothy, beige-coloured head that lasts roughly two minutes before falling apart completely; a creamy-looking collar is left behind, along with a thin layer of film. Decent lace; looks good enough, but the aroma is where this brew really piques my interest. The peanut and chocolate extracts really come through in force here, and actually do a fine job of replicating the scents of peanut butter and milk chocolate. There's also a toasted hazelnut note, with hints of cream, roasted malt and caramelized sugars. So far, it's delivering exactly as advertised.

Tastes pretty good, too - though admittedly, the nose had me expecting something more intense in flavour. I'm getting notes of oatmeal, roasted malts, hazelnut, chocolate and caramel right off the bat, with a bit of milk sugar sweetness mixed in there too. The peanut extract is noticeable throughout the sip, without necessarily being the immediate focus of the profile, instead blending together politely with the chocolate and milk sugar. Hints of roasted malt barely begin to breach past the sweeter aspects, just prior to the finish - which is more peanut butter shake, lingering into a brief, chocolatey aftertaste. Medium-light in body, with low carbonation levels and a smooth, easy-going texture that does feel just a little thin for the sort of brew it's trying to be. I mean, I know this is only 4.5%, but if you're going to call it a 'shake' then perhaps some more body is in order.

Final Grade: 3.84, a B+. There's definitely room for improvement, but Whitewater's Peanut Butter Shake still turned out a lot better than some of the other gimmick beers I've picked up at the LCBO. The extracts do result in a somewhat 'artificial' feel, and it's too sweet to be something I'd want multiple servings of... but strangely, this one's whole winds up being more than the sum of its parts. In any event, it's easily the most interesting Whitewater product I've tried to date, if not necessarily the absolute best.

Sort of tastes like burnt peanuts. It's okay but not something I would try again. Look is okay, smell is okay, feel is okay, but taste is weird. I'm not convinced.

Appearance - dark cola brown with a light tan head that measures three quarters of a finger. Head lingers for a medium duration and a touch of soapy residue at the edges of the glass.

Smell - peanut butter and Nutella mixture. Fairly aromatic and not too overwhelming with adjuncts.

Taste - lots of peanuts again, middling bitterness but lots of malt. Even some salty bits in there. Chocolate is present too, and miraculously it tastes like the thickness of peanut butter.

Mouthfeel - nailed, the thick chewy and creamy nature of peanut butter. Carbonation is middling and finish is thick.

Overall - not a beer I'd enjoy regularly but this actually hits the brief quite nicely, lots of chewy, malty goodness in this brew and the fact that the peanuts shine through so well is a testament to the brewers. Will likely enjoy another while they are in stock.

This beer has a thick beige head and the beer itself is dark brown.

The smell is peanut butter, icing sugar, and dark malt. All of these attributes roll through to the taste in a nicely consistent way. In fact, the taste is really fulsome.

The beer is medium bodied with a creamy, almost silky mouthfeel.

The finish is smooth and soft.

I can’t find anything wrong with this one. I give it a solid A grade.

If you can find it, try it!

I don't how to review beers. But it tastes like a 3.25. Too sweet, needs more peanuts.