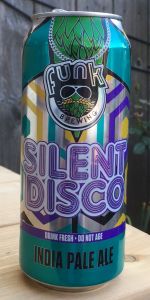 Notes: Move over Citrus there is a new IPA in town! Packed with a BIG I mean YUGE bowlful of juicy fruit flavors. Tropical, herbal, and delicious. This unfiltered, soft IPA packs a head- spinning, mouth-pleasing, disco-friendly notes of pineapple, passion fruit, guava, melon, and berries.

Really nice slightly hazy golden color with a pearl white head that provides more than ample lacing. Pineapple and melon on the prominent aromas on the nose, along with some guava.

The melon is most prominent on the taste, with the guava and a smidge of pineapple. The mouthfeel is full and commensurate with the style. This and Citrus would be IPA “fridge beers” if I had regular access to them.

20oz nonic.
Pours slightly orangish, hazy. Smells balanced, GF, guava, orange and a host of others. Taste...GF, guava and orange/mango, tropical. MF was medium, smooth, with very little bite.
This was an excellent surprise for me. I'd never heard of the beer, or the brewery before.

Taste follows the nose with notes of peach, clementines, orange, lemon, grapefruit, and some mild grassy bitterness on the back end. A hint of a mild simple malt backbone is there, but mainly just provides some balance.

Feel is a tad fizzy but smooth otherwise. Nice full body for an IPA but not milkshakey or heavy.

Overall this is a fantastic IPA. Great flavors and a nice example of the style. Definitely try this one if you get the chance.

Pleasant to drink and drinkable, though. Not a top tier IPA but I like it despite it not showcasing any particular hop varietal well or really evoking a specific hop profile.

If you're looking for a New England IPA, but like a nice bitter IPA this beer is for you! Forget that --- This rocks!

Canned on 11/01/2017.
This was poured into a nonic pint glass.
The appearance was a murky to glossy burnt yellow/orange glossy and "wannabe" sort of haze to it. Though not fully transparent, moderate amount of floaties bouncing off of carbonation bubbles trying to make their way to the top. Two finger white foamy head started and slid off at a moderate pace. Some lace.
The aroma had some grapefruit pith to a semi-bitter to oily hop zestiness with some hop spice and a noticeable hop bitterness (rind-like). Took a little bit but some danky sweet onion did come out later on.
The flavor leaned towards a bitter to oily hoppiness up front. Some grapefruit sweetness, but they're having a super hard time to come out. Quite stifled, I'd say. Hop oily to bitter pith/rind-like aftertaste.
The mouthfeel was about medium bodied with the zesty to oily hoppiness pummeling like one of those "old school" palate wrecking capable AIPA's that I remember - somewhat like a Stone IPA or Green Flash's Palate Wrecker. Carbonation did feel fine with this. ABV felt fine. Definitely a hoppy sort of bitter sustaining and oily in the finish.
Overall, is it me or is Funk trying to replicate Focal Banger? I'd say it's a decent effort and up there but not exactly right there next to a Focal, in my opinion; and rated towards the New England styled IPA, yes I accepted those "floaties."

Didnt expect much from this, so it surprised me. I also have a cold so my nose and taste may be a bit off. Either way, Its good. Pleasant surprise with no off taste.