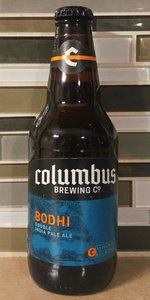 Notes: An awakening of the senses by virtue of American hops. Pale golden in color, this double IPA showcases a unique blend of hops, highlighting the true nature of Citra.
View: Beers | Place Reviews
Reviews: 262 | Ratings: 1,750 | Log in to view all ratings and sort

12 oz. can dated 4/07/21
Pours a cloudy orange with a huge, long lasting white head.
Grapefruit, pineapple, citrus peel.
Tastes like it smells with maybe some peach and resinous pine.
Mouthfeel is glorious. Soft and pillowy with a slightly dry finish.
An excellent DIPA.

Poured into a 13 oz Teku glass canned on 3/17/21. Pours a very attractive slightly cloudy orange with a finger sticky white head that leaves thin wisps of lace with nice retention. 4.5

Mouthfeel is above average, maybe a whisker dry, plenty of carbonation, and goes down really easy. 4.25

Overall this is an excellent East-West DIPA, one of the best non NEDIPAs I have had in a long time. Thanks Jzeilinger for this can. 4.25

Massive, stupid creamy head on this thing. Real nice lacing too. Honeyed-orange body reminds me of Two-Hearted and that's a definite plus. All in all, one of the prettier pours I've seen in a minute. Nice fresh hop scents; resinous pine with a bit of citrus. A lotta malt sweetness too. Smells nice. Taste follows, but it's a little muted. Hmmm, maybe that was a best-by date? I don't hate this by any stretch; what's there is well-balanced and tasty. Just doesn't taste fresh to me. Feel is soft and creamy; slightly oily on the back end. Minimal carbonation and just a hair shy of medium-bodied. Crossed the border into Ohio for cheaper gas the other day and found this in the cooler. I'll have to make that trip again some time and keep an eye out for fresh stock.

This one is damn soft. Almost like sleeping on the marshmallow man or Miranda Kerr’s bosom, these Columbus boys know what they are doing. Maybe they watched Saved by the Bell as kids because this one is straight up as West Coast as it gets. Pair this with a Double Double of beef dip from Phillipe’s, you bet I would.

See you later, my children.

Draft pour. Nice amber color. Very fine ivory head and nice lacing.
Aroma isn’t strong. Some citrus.
Taste is malty with some citrus and moderate bitterness on the finish. Hard to taste the alcohol but it does creep up on you.
Good mouthfeel. Carbonation was a little stronger than I would have liked.
Overall a quality Imperial IPA.

I feel like this was destiny. In Columbus for a drive-in concert during This pandemic we picked up some pizza and then hit a nearby grocery store for some drinks. I tried to find the freshest IPA that I could find and what do you know, they had one six pack of Bohdi cans in the cooler that was less than a month old. I wasn’t looking for a Dipa but couldn’t pass this up. Glad I didn’t because this beer is fantastic. So easy to drink. Love the scent and great mouth feel. I enjoyed at the concert and had a few left over that I have enjoyed even more. Not a hazy or NEIPA - this is a classic IPA with great hop feel. Some Malt taste but predominantly citrus. It will sneak up on you because it is so easy to drink. Love this beer. Love the 12 oz cans and will definitely be looking for more Wish I could find this closer to home

If you wanted a drinkable DIPA, you will find it hard to beat this. The first time round I didn't think this was a DIPA - it's smooth and you notice the Citra only if you know it. Before long it disappears as you keep drinking it only to make a roaring comeback just when you want to dismiss it. Probably not the one DIPA for me but it will be hard to not have it in the stable. Certainly a memorable version of a DIPA.

S: very restrained; what's there is ripe pineapple and melon;

T: more balanced than many DIPAs; malt sweetness with ripe pineaple, melon, and some mint; mild to moderate bitterness on the finish;

O: this is good, but not special; considering the ratings, I was disappointed; the can was only 6 weeks old; perhaps it was mis-handled;

Reviewed from notes. Purchased on 12/27/19 at Jungle Jim's in Cincinnati. Reviewed on 1/4/20. Poured from the stubby 12 oz. bottle into an El Catador teku glass.

A: Modestly hazy nice gold, with a fair amount of streaming carbonation. Forms a half-finger of white head that lasts well.

S: Melon and resin and herbal. Cracker malts and citrus rind. Maybe a little stone fruits as well. Nice, but not huge for a DIPA.

M: Medium body, average carbonation. The alcohol is noticeable but generally well-hidden for a DIPA – thought the ABV listed isn’t big for a DIPA either.

O: A good beer, but I'm not buying the hype. Or at least not as good as I hoped, or perhaps a batch that doesn't live up to historical achievements. But I’d buy it without hesitation on a rotating basis if it was available around here. It’s not a juicy NE IPA, it's maltier than (and not as bitter as) a typical West Coast IPA.

S - Ripe pineapple, mild-moderately dank, honey graham cracker. Aroma is pleasant but on the mild side.

O - Flavors are very well balanced and it is dangerously easy to drink. Good stuff.

Classic American IPA that doesn't shy away from putting Citra hops in the spot light. Equated to a boozier Zombie Dust that has traditional bitterness but approachable for people of all palates. Highly accessible in Ohio, making it an impressive go-to brew.

Appearance: orange in color with a 1 " head that slowly falls.

Smell: citrus and a hint of peach comes through to the nose.

Overall: an easy to drink DIPA that is flavorful and satisfying.

Copper colored with a murky complexion. There’s a fingernail of dishwater white around the rim and covering the majority of the top. Light lacing is present. The aroma is of tangerine and pine. I’m tasting tangerine and citrus fruit. The mouth is very resinous and lightly sticky.

My buddy had been begging me to try this saying it is the best brewed beer in Ohio. We have similar tastes in IPAs so I decided to give it a try. It was a 22 ounce draft. The look is a nice dark golden color. The aroma is a nice blend of citrus and pine hops. The taste is the same. These balance of flavors mask the 8.3% alcohol content. Definitely can drink this down pretty quick and get a nice buzz. The beer is super smooth and has a nice dry finish. Definitely having it again at some point. Very, very impressed. May be Ohio's best IPA.

Received a single, twelve ounce bottle as a part of a trade almost a year ago. Looking through top-rated beers, and realized that I forgot to review. I did not trade for this, it was included as a bonus-brew. Not distributed to MA. Pleasantly surprised, very nice brew.

L: Dark gold color with a good amount of off -white head. The lacing is crazy on this thing, it clings to the glass for days.
S: Getting a ton of citrus and tropical fruit scents, followed by a nice hoppy pine scent.
T: Tons of citrus in the flavor and also some pine notes.
F: Medium-bodied with a good carb and a nice dry finish.
O: This one does not disappoint, super solid DIPA.

Bodhi is only my second of the Top 10 rated IIPAs. I am neither a fan of the style, nor the hype around it.
Some of that explains my low rating... and my tendency to rate extreme beers not relative to their style but relative to what I prefer (which is not extreme.)

But Bodhi starts fine, a good-looking gold and a really aromatic, hoppy/fruity/malty melange. But the bitterness caught my buds by surprise and wouldn't let go (50 IBU is usually above my pleasure threshold and I'm guessing Bodhi is 75+.)

Columbus' flagship, Bodhi is the first I've had from them. So I went on their website and saw Bodhi is a GABF award-winner. But, they seem otherwise to focus just on their beer and for that I give an OA hug.

Pours a deep amber and a reasonable head, decent lacing.

Smells very fruity, orange and peach. Booze not noticeable despite the hefty ABV.

Taste is dominated by fruit, mostly peach and citrus. Bitterness is moderate but only noticed after the fruit flavor.

Overall: An excellent beer. If you like fruity flavors this is an amazing beer, if you prefer a traditional grainy beer or super bitter IPA, this might not be what you are looking for, but I really enjoyed it being an occasional IPA drinker.

The best of the 4 beers I tried from this company. Hazy color. Tropical taste. Lots of papya and grapefruit. Finishes Crisp and juicy and overall good feeling

Bodhi brewed by Columbus Brewing Company, with an ABV of 8.50% This American Imperial IPA pours out of a 12 oz bottle into a pint beer glass a nice golden amber color. There is also a nice white head on top of this brew with a nice amount of lacing. The lacing sticks to the side of the glass well. The smell is rich with hop bitterness, a slight citrus flavor, with earthy grains and malts. There is a lot going on in Bodhi. So far this is a nice inviting brew, now for the taste. It is rich and bold with flavors. You first pick up on the hop bitterness with citrus flavors. The body of Bodhi is a medium to heavy but not to heavy. It is really hard to pick up on the 8.50% ABV in this brew. It goes down this smooth, the citrus flavors are a nice touch to this brew. There is nothing overpowering about this brew, it has a super nice balance to it. If you are a fan of IPA'S you should look this brew up. The mouth feel is Hoppy, Bold ,Rich, Clean , Smooth and Refreshing. Overall I'm going to give Bodhi a 4.25 out of 5. I would definitely look this brew up again giving the opportunity to. Columbus Brewing Company, did a real nice job with this IPA.

Wonderful balance of malt and citrusy hops. Attractive on the eye with a golden color with white head that rescinds into nice lacing. Remarkable is the mouthfeel - super easy to drink and masking its DIPA qualities. Citrusy on the nose and palate. Wonderful beer.

A wonderful full flavor , earthy , multi-layered beer. Pours a Beautiful deep copper with a thick off white head. Mostly a deep earthy smell with some citrus , flower undertones . Fills the mouth with flavor but is still somewhat subtle at first taste and isn’t overwhelming . Keeps you curious for the next taste . A great beer

12oz bottle poured into shaker pint. Super fresh at about a week old.
Nose is citrus-ey and pine.
Taste is flowers, a tad sweet, almost pollen like. Maybe a bit of onions? Can't pinpoint it.
Great balance. I think that is why I'm enjoying this so much.

Bodhi from Columbus Brewing Company
Beer rating: 99 out of 100 with 1750 ratings