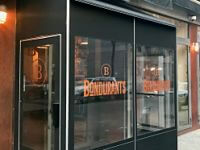 Reviewed by Stockatron from Australia

4.28/5  rDev -2.7%
vibe: 4.5 | quality: 4.25 | service: 4.25 | selection: 4.25
Always a good tap list, focussed on NY and surrounding states, with a few interesting out of towners as well. About 16 taps and also a big selection of whisky/bourbon. The food smells good but I havent eaten there. Nice casual atmosphere. Service is good but can be a little slow when busy, but that can be down to people talking to the bar staff for 5 minutes before choosing. I live around the corner but the Q train makes it very easy to get there.
May 27, 2017
Rated: 4.86 by ConorGolden from New York

4.25/5  rDev -3.4%
vibe: 4.25 | quality: 4.25 | service: 4.25 | selection: 4.25
I was here for the first time last week with Small Strange Man (his actual name) & Witz after the Sam Smith promo around the Swiggers corner. And now again, this the Saturday return post Benless lunchings, as he selfishly bagged his own plan to hang with his parents in town. Just around the corner on 85th off 2nd. Long day, watch my handwriting slide...

6 sides of an octagon shaped bar, unlevel slab wood topped, vertical slat wood base, and a foot rail. Seating for 18 on stools most sides around. We land sweet spots on the corner end of the bar with views of the world. Bar island holds tiered booze on a wood countertop over a 2 door cooler below, and holds a post with built in baby shelving holding bourbon & whiskey across 4 shelves. 2 dozen taps on a row with non-descript handles on the longest stretch of the bar and a single handpump off to one side. Wide pan lamps overhead tracing the bar all around.

Front & rear walls in beige over olivey vertical wood slat lowers; whiteish brick on the far wall and bricky brick on the near wall. Uneven woobly slat wood floorings and pressed tin ceiling amidst beige framed pieces with ductwork. Shelving wrapping the post on the near wall end of the bar with more bourbon, rye, & whiskey, plus some lightly displayed glassware, beekers, odd glass bottles, and another Tired Hands growler (respect!) Actually, Lindsey’s been out to TH so the growls are legit. Slat blackboard slates notched in 4 rows of 5, each one listing a beer, brewery, and style, plus a dangling slate for the cask offering. Boxed unit on the far wall; shelving with glassware, bottles, and hey, isn’t that a Tired Hands growler? Black boards in between the shelving ends describing the contents of the pimento burger with a drawing and the pulled pork sandwich. Spinny top lamps above the front window pair, no, trio, opening out with bar counter facings on one, and a table on another. Rear corner shorty table (where we sat last week), and 5 raised tables on the far wall, some sharing benches there. Flatscreen in the front corner (The Yankees, we are not having a good day). Box board listing events done in what looks like colored chalk or markers or something Witzel doesn’t think is easily erasable. This artist disagrees.

Food, they do, but alas, we were recently lunched up. Homemade tater tots, blistered shishitos, grilled chicky sandwich, pimento burger, grilled cheese, pulled pork sandwich, and smoked chicken wings; these are a few of my favorite things.

Revisited a week later for the Ballast Point tap takeover, fuck, 24 taps & cask mango sculpin once late ass Billy gets here to tap it. Took a pinch of the Habanero Sculpin (yep, it’s got some heat to it, duh), and then had a pint of the Steamboat Black Lager (schwarzbier huh, more like a black IPA, me thinks, and it was lovely). And then tasters of the grapefruit Sculpin draft & nitro side by side (Nitro is mad smooth, but takes the corners off the grapefruit. Regular draft is the better of the two), and a glass of the Sour Wench Blackberry Ale (something of a blackberry Berliner, crazy tasty. I declare Win). Just a waiting game now, really. Oh yes, cask Mango Sculpin, you will be mine. It was really damn nice. It’s a close second to regular ol’ Scuplin and easily kicks Habanero & Grapefruit Sculpins’ asses in a street fight.

They changed up the normal food menu for tacos for this event today; 7 of ‘em, and I should have had at the Al Pastor (king of all tacos) or maybe the Camarones (Shrimp). You know, those little tap boards slide to hide a flatscreen (Rangers hockey! currently up 1-0 over Washington). Good crowd, but a few guys just arrived with a book in hand. You can’t read, and certainly not in a loud active bar. These kids, I just don’t know. Seriously should have gotten here earlier and had on some tacos. And the Rangers are now up 2-0. Good house on the UES.

Reviewed by Ironstutz from New York

4.25/5  rDev -3.4%
One a growing number of great craft beer spots in the UES. This place has rotating tapsm great food, and friendly bartenders and crowd. No TVs are typically visible except for big games as the are sleakly hidden behind menu boards. This is overall a great place to get a beer, whisky, or food. One of my new naighborhood faves!
Dec 11, 2014
Rated: 4.5 by SkiBum22 from New York

What a beautiful bar this is. All wood, candles, a chalkboard menu and a rustic environment... simple but oh-so-cool. Craft beer and bourbon, I am in! Twentysomething taps, including five special Cigar City taps during my visit. The Rum Barrel Marshall Zhukov was to die for. One of the best beers ever. They update their taps regularly on beermenus.com, which I appreciate, and there is always lots of good stuff. Jolly Pumpkin, Maine Lunch, Green Flash, Smutty, Barrier, Stone...

Great service as well, friendly and knowledgeable, but there is no table service that I know of, so order at the bar. The food menu looks pretty good, although my kale salad was mighty disappointing. Next time I'll go for the smoked chicken wings (good craving).

More downtown than Upper East Side, this is a true gem of a beer bar. I will be back and back again.