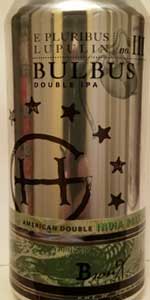 Straight pour from a 16oz can to an oversized wineglass (JK Stem durrr). No freshness or packaging information is available on this can, but it was purchased as soon as it hit the shelf in one of my local stores and it’s a recent release. I’ve been meaning to give this brewery a shot. It’s been refrigerated several days.

Appearance (3.5): Three full fingers of light khaki foam rise off of the pour, capping a rich copper-orange body with just a slight haze. The head dies down fairly slowly, leaving a slick film of foam and a clingy collar near the top. As the beer goes on, it leaves a few scattered suds, but not much else in the way of lacing.

Smell (4.0): Sure smells like an older-school DIPA. Candied lemon, papaya nectar, a nice and not too funky earthy character, orangeade, and some sweet berry aroma. The malt is not bad, relatively hefty but for the most part playing well with the sweeter, thicker parts of the hop aroma. It brings some toffee sweetness, coffee cake, and brioche. There’s a really nice floral scent that comes out more as the beer opens up.

Taste (3.75): Again, it really tastes like an older-school, more or less West Coast-oriented DIPA. The hops come in first with a quick flash of lemon zest before a very earthy, floral flavor washes over the palate. It’s accompanied by a full malt body characterized by toffee, a touch of molasses, and brioche with buckwheat honey. It’s buoyed on the back end by some sweetened red grapefruit juice and a touch of lime zest, but that mixture of earthy hops and toffee-forward malt comes back up in the finish before resolving into a linger, spicy bitterness. That bitterness is generally resinous in character. And surprisingly, essentially no booze is obvious here. Like I said, it very much tastes like an old-school West Coast DIPA.

Mouthfeel (4.0): Can you guess what I’m going to say? No? Well, it generally feels like an old-school West Coast DIPA. The hops are most evident with a pithy, drying feel, covering up a full-sized, above-medium but not quite “heavy” body that’s slick and a bit syrupy in feel. Still, in concert with the oily hops, the carbonation dries out the body fully. It comes in with sparse distribution, offering a light prickle before foaming up evenly in a soft, velvety swish.

Overall (3.75): Honestly, I did not know what to expect with this beer. I was hoping for a NE-style (D)IPA, but as mentioned about four times above, this beer is definitely something more like an old-school West Coast DIPA. A maltier one, to be fair, but still. The malt is big and full, but more “rich” than “sweet” or cloying. The hops are bitter and pithy, but not overdone, offering a range of concentrated fruit flavors mixed with earthy, resinous, and floral characters. The most remarkable thing is that it shows very little, if any of its 9.7% ABV. It definitely DRINKS like a beer of that size, but it doesn’t show in the aroma or flavor. Overall, it’s a pretty decent, but not excellent DIPA. Make of it what you will.

This beer is a very nice counterpoint to the current ultra haze craze. The beer pours a clearish amber color. Very grassy and dank on the nose. The taste is also very grassy and dank, and there is a slight bitter bite, but not too pronounced. The malt flavor is wonderfully bready, close to that of a nice brioche--subtle sweetness. The beer reminds me a lot of hoppy beers I loved from the PacNW, a la Bale Breaker's Bottom Cutter and Melvin's 2x4.