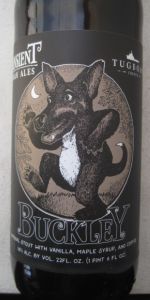 Pitch black color with a caramel head, strong maple on the nose along with astringent alcohol. The taste is straight boozy, I couldn't get coffee, maple or anything else, just a thick syrupy booze. I'll pass.

A- Black with a small mocha head

I've had this beer numerous times and absolutely loved it. This time (2017 vintage) it had a slight green pepper/iron taste to it and it threw me off. Everything else was spot on but I can't completely get past the pepper.

Sampling a 1pint 9 fl oz bottle at cellar temp poured into a snifter. Beer is courtesy of @whyteboar, thanks man!

The beer pours a jet black color with a creamy tan head of 2 cm foaming up. The foam fades, but remains a sturdy surface layer that leaves tightly packed dense lattice after each swirl or sip. the beer looks the par for an Imperial Stout.
Aroma is a big hit of maple syrup, mixing with some roasted malt notes and also a good bit of ground coffee. Not really boozy on the nose, which covers the 13.5% well. No hops on the nose either.
First sip reveals a pretty big body with creamy texture and fine tingly carbonation. The beer definitely coats my palate after each sip from my glass.
Flavor is what the nose tells me with a good dose of maple and vanilla and then roasted malt and finally coffee which lingers a bit. The coffee also goes kind of astringent and acidic at the finish and into the swallow. This hurts the drinkability for me. I love the other components of the beer, but the acidity is unpleasant.
No hops here and the ABV only reveals itself with a bit of warming in my belly.
I like this beer and only wish the coffee wasnt acidic, otherwise this is a winner!

Smell is nuts. Bursting with robust coffee. Maple? I honestly don't know the description of this beer but im getting that. Loads of caramelized sugar. So sweet smelling in a perfect way. Im over sugary pastry stouts but damn does this beer hit the sweet mark.

Taste is hmm... iron? Metallic? Blood? Wtf. I don't know what I'm tasting. Rust? Taste like licking a stout off of a rusty I-beam covered in deer blood. Wtf.

Dude. There is definitely blood in this beer. This taste like a bloody rare steak that was undercooked.

Overall wtf. Im rating this a 4.75 so im not deterred to try it again when i look up my review. This has to be a fluke.

Beer # 888
2020 vintage courtesy of JohnnyHops.
L: black with Minimal mocha head.
S: coffee, chocolate, fudge, vanilla.
T: Combination of really good coffee and chocolate/vanilla. Tobacco, marshmallow, maple, & cinnamon notes. roasty, not boozy at all?!
F: perfection. Viscous.
Overall: super good. Astounding!
Lately I can’t tolerate super thick or sweet beers, so I was a bit worried I might not be too impressed. This is in my all-time top 5 coffee stouts for sure. The sweetness and coffee/burnt malt is perfectly balanced.
Greatful I got to try this imperial stout masterpiece I’d never heard of before.

This one pours a fairly dark black color, with a small head and a little bit of lacing.

This smells like roasty and dark coffee, with earthy dark maple, sweet vanilla, and milk chocolate.

The coffee in this is a little bit acidic, but the maple and vanilla are some pretty well here. The barrel aged version of this seems to take that coffee acidity down a notch. The maple is sweet but not too sweet, and the vanilla adds some caramel and cake-like flavors. There’s a good amount of milk chocolate and a little bit of roast.

This is creamy and silky, with no real booziness to it.

The coffee character in this one isn’t perfect, but the rest of it is pretty good stuff.

Overall: I’ve wanted to try this, and other Transient stouts, for a long time. Pretty much lived up to my expectations. Absolutely worth a try if you like big, fairly complex stouts. 4.5

Appearance - Pours black with thin tan head that settles to a thick ring. No lacing.

Black liquid flows & brings with it everything noted on the bottle – wow. Chocolate, vanilla, roast, booze, all making love on a flower-patterned futon. Lovely.

Buckley needs some time to breathe, well, like most of us. Cold, the coffee is too sharp, too harsh, but it slowly fades into the shrubbery as it warms. At full bloom, this is integrated beautifully. Coffee, roast, vanilla, & maple syrup, roughly in that order, come smiling across the tongue like a parade of supermodels. Bits of bitterness, leather, tree bark on the finish. No booze at all, except the feeling in my head. Not thick at all for the ABV, this could pass as a bulked up 7.5% American Stout. Drinky. So well balanced that a bottle to oneself isn’t out of the question.

An excellent beer whose flat-top brushes right up against the next level. I’d never turn this one down.

Pours an opaque black with a finger of tan head.
Smells of vanilla, maple, chocolate roasted malts, coffee.
Taste follows, lots of coffee and vanilla. The maple is there but not overpowering,
Full bodied and well carbed. Smooth, well balanced.
Overall a very tasty one from Transient.

Monster flavor here; a touch too sweet, but right up my alley.

A - Pours a motor oil black with a thin tan head. Decent amount of soapy lacing.

O - This is a killer imperial stout. Tons of rich flavors and with no noticeable alcohol at 14%.

Poured into a snifter. Opaque dark brown with a thin tan head. Fantastic aroma with maple, coffee, chocolate, and vanilla. The taste was even better. All of the above flavors were bright and distinctive. The feel was full but not overly sweet. Some heat on the finish but not much for such a big beer. Outstanding.

Pours an onyx black color that swallows all light, underneath a dense, dark tan head. Rich dark chocolate and coffee aromas dominate the nose, and there’s also a significant maple aroma as well as some vanilla.

The coffee is the first flavor on the taste, but the dark chocolate and maple soon follow, and the vanilla guides this to a rich, smooth finish - and zero booze in a huge ABV (14.0%) stout. How is that even possible?

Yet another beer that Transient executed perfectly, IMHO.

At last a worthy challenger to founder's breakfast stout has been found, and in its own backyard no less! Now this and FBS are two different takes on the style, with this being the more viscous and sweet of the two. The maple, vanilla, and the fudge pair perfectly with the oat and coffee bitters. Rich, rewarding and smooth. For a beer that is not barrel aged, it really brings depth of flavor.

This is the best coffee maple stout I've ever had, and even beyond that specific niche, it's a top-notch beer; I don't generally appreciate maple in beers but am open to trying them, so this one was a shocker for me. Exceptionally smooth, very well-balanced, bursting with flavors, and full-bodied.

Had this recommended by Max at Beer Temple in Chicago and grabbed a bomber during recent Beer Safari.
Opens with creamy head that quickly dissipates to a tan halo against black/brown body. Wonderful aromas of maple and vanilla. A bit of coffee and mocha chocolate. Taste is dominated by vanilla. Rich slightly sweet and delicious. Other flavors evident but also a bit boozy and bright in feel which gets in the way of the more subtle flavors. Otherwise feel is silky despite bright carbonation bite at end of sip. Overall seems very good but a bit young and bright.
A bit over on vanilla add...which is noticeable as a specific add not from BA/oak. The maple is a nice touch. Coffee is noticeable but somewhat lost in the malt and vanilla.
Would definitely recommend if you like dessert stouts. For me...Very good beer and very happy to have tried.

Stark black with a large, beautiful cascading mocha foam that settles at a thick, creamy blanket with a garter-like grip for a good long while.

Smell is dusty cinnamon, but light, with faint vanilla creamed coffee, roasted dark malt and a hint of smoke.

Taste indicates some fusil booze, but not necessarily bringing a burn with it at first, starting with acidic coffee featuring a slightly bitter bite. There's seemingly too much vanilla, as it's rum-like, which drowns out the maple and other elements, such as the cinnamon, which I'm not getting much of. There's a slightly smoky exhale that may be from the maple, but actually comes across as dark coffee.

In the end, it does have a hot swallow that builds, with a medium body, crisp, slightly thick fizz, and a semi-wet constitution. Buckley is okay, but could be better by knocking more than a few points off the ABV.

Having a fresh 2019 bottle, Buckley really is much more intense and delectable with tons of fresh coffee giving off mocha brownie in front of light tobacco and a hint of maple brulee, accented by chocolate frosting.

Time to Increase my rating.

Vintage 2017.
Pours opaque black with a beige head that remains as a ring on top and leaves thick strands of lace. The smell is of coffee, very faint vanilla and earthy hops. The taste follows with coffee flavor dominating. Subtle notes of vanilla and maple follow. Light bitterness on the finish. Good stuff.

Nitro at the brewery. Black body. Smells very sweet. Booze, vanilla, maple, a little coffee. Sweet fudge. Tastes very sweet, too. Maple sweetness. Vanilla again elevates the sweetness. Chocolate. Just a little bit of coffee and accompanying bitterness, but not enough for this level of sugar. Heavy body and boozy. I can see why people like this, but it’s too sweet to be drinkable in any real quantity.

Appearance - On Nitro, The beer was brownish black with a mocha colored head.

Taste - My initial impression was sweet chocolate with maple to follow. The beer was sweet but not cloying. The vanilla notes were hidden but still detectable. The sweetest lingered in the aftertaste.

Mouthfeel - On nitro tap, this beer was super smooth.

Overall - I have only had the speaker on nitro tap. With that said, I am prepared to suggest this beer fits into an elite category.

Overall coffee dominates the taste, could use a little more vanilla to add some more sweetness, but still overall a very nice stout

Lots of carb for an impy stout
I was expecting the coffee to be much more dominant based on previous reviews but found it to be well integrated. It does drive the flavor, but if you told me this was done with just kilned coffee malt and a bunch of mild chocolate malt and some dark wheat, I'd have believed you. Feel is medium thick. Not bc or perennial level viscosity, but at least as thick as prairie, cycle, or Cw stouts.
Good beer!

Buckley from Transient Artisan Ales
Beer rating: 96 out of 100 with 274 ratings