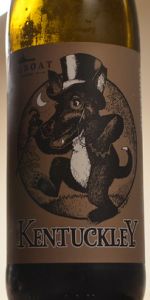 Acquired from an the Beer Temple in beautiful Chicago, IL. Drank out of a Transient Artisan Ales Members teku.

Taste: Just as good as I remember it on draft. Vanilla and maple are the first out of the gate followed by oak and bourbon and then a nice pop of coffee and semi-sweet chocolate at the end. Subtle notes of dark fruit and almond with a surprising amount of bite from spice and the ABV. Not hot perse, but definitely a lot of alcohol to cover up at 14%. This gets so damn close to joining Clare's Thirsty in the elusive 5/5 taste club. I'm sure a bit of time to calm the heat would absolutely do the job.

Feel: Medium heavy mouthfeel, not quite BCBS levels of heavy, but still up there. The residual sugar level is perfect thanks in part to the maple, very slick and coating while avoiding that chalky feel that will follow every once in a while in an adjunct heavy stout. Syrupy without being overly heavy or sludgy.

Overall: I really liked Buckley as a base beer, but give Chris a barrel and he'll make magic. Wowowow. I would put this on the same level as the highly regarded BCBS variants. Just a joy to drink.

Look - Pours a dark, dark brown with a thick caramel head.
Smell - Bourbon, sugar and a hint of soy sauce.
Taste - Roasted malt. Sweet and hot. Did not improve as it warmed.
Feel - Very thick and creamy. A little boozy on the finish.
Overall - A little too sweet for my taste. Not very well balanced.

Look: motor oil black with a chocolate khaki .5inch head
Smell: maple syrup and a ton of coffee.... you get hints of cocoa, bourbon and vanilla too
Taste: coffee, some dried fruit, you get some maple and barrel... you get zero vanilla.
Feel: medium body, light carbonation, slightly bitter

Very dark appearance with slight tan head that dissipates quickly. Aroma is a very pleasant vanilla and maple. After a couple of years of aging I. The bottle, the booze flavor is minimal. Tast matches aroma.

12/31/2018 (2018 bottle) -- maple syryp/vanilla upfront with coffee/bourbon blooming mid-palate and carrying nicely off the back. Very enjoyable and better as it warms.

Everything as advertised, minus the barrel presence. I only got a faint hint of the barrel with maple being the leader on this one. Very delicious, glad I tried it. Don't think I'll be paying any secondary prices on this again anytime soon, though.

Off the charts... builds on base beer with sweet vanilla and maple that give way to the coffee flavors with rich oak/booziness that smooths out the bitter coffee notes. Just perfect

S- Burst of coffee, but not quite as much as the base. Maple and brown sugar with just a little vanilla. Not much barrel or booze, just a little oak.

T- Pretty balanced. I found Buckley to be a little bitter, this is more well rounded. Mostly coffee with some sweetness. Right amount of maple, though it seems to fade at times. Barely any vanilla. Not much booze, slight barrel presence.

O- It's well done, but I would have liked a touch more maple and more vanilla. Admittedly, I'm not a big coffee fan and more adjuncts might make it too sweet. Definitely an upgrade over the base, but not quite as significant as I expected. That's not meant to be a knock, it's still damn tasty and one of the better breakfast stouts I've had.

2018 vintage. Really good beer, but too sweet to drink more than 8-12oz of at a time. Would love a smaller format.