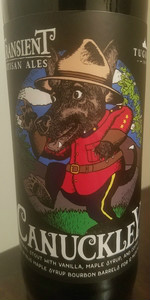 4.25/5  rDev -6.6%
look: 4.25 | smell: 4.25 | taste: 4.25 | feel: 4.25 | overall: 4.25
A: Asphalt highlights to an obsidian pour that’s oily in circumference. The neck tops a bone white hue with a darkened downturn, of a penny toned rim. Thus, not much room for retention, which is limiting on lace entanglements. A collar that continues to lessen with a sensibility on heat, for slightly etching the windowpanes

S: A barrel awareness to stronghold the roasted grains with a bourbon presence. The start is a molasses coating on dark fruit skins, as an espresso roast loiters to the maple backs, of a sickly shrewd growth. Namely, a syrupy tumor upon the timed warmness, as malt creams the humid agilities. There are light recordings of Cherry Cordials at the midriffs, while maple further purifies a combating to an adjoining development in the bourbon spaces. Meanwhile, a balanced hop weight to avoid a suffocating middle, which provides a light peppery woodiness near rearward resin. Subsequently, a hindmost movement from soft to mild – vanilla oak – tannins that signify a leathery convoy, besides the smoked-dry turfs

T: The exertion has a cask dynamism of arrogance, as malt initially struggles to materialize off of burnt coffee. Howbeit, liquored hardihood stretches upon charred Raisinets, while conveying angles to figs & plums. Some positioning on early adoptions to tire track licorice with woodsy tannin partitions, which aid to reinforce those black treacle gears. In succession, a measure for the warming openness to adapt a caramel spread, for Scottish tablets, amidst the maple reinforcements on artisan S'mores. There is a small stake to reference trees of a deciduous nature, while dabbing at coniferous pine needles. This element further stretches across birch & paperbark maple, given a sharp (resinous) bite to kick-off the epilogs. To that end, a prevalence for maple to gridlock bourbon atop ruggedly pruned rawhide, while citing a slow-burning chimney fire

M: Sharply cutting feel that’s savvy in foundation with a bitter earthiness, and one to quickly smoothen out to the minute. In doing so, the effort is careful to not middle a cloyingness, by maintaining a clean acuity to the riding sweetness. There is a range of warmth that’s distinctively strong, but not a concern to dictate a heated fiasco. In parallel, a touch of acerbic tannin throughout, which works to profit the additives attributes with a slight sting to the clean & dry cessations

O: A fairly accessible presentation with a barrel presence to check the (semi-stick) extracts. A tactic that’s proficient in coordinating the rich malt layers to the woodsy hop effects, while bourbon perimeters all of their showpieces

O: Highly rated beer here from Transient, from my home state. Just got through Kentuckely, which I thought was just okay. Surprised to see such high ratings for this beer. Kind of a competitor to CBS, but with extra maple syrup and vanilla added. Gets a little muddled because of that for me. Little boozy and hot as well. It's a decent beer, I just wouldn't say it's that well balanced.

Recommendation: One of the better Transient beers I've had, but maybe not world class just yet.