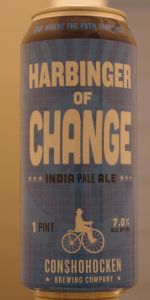 A thanks to the commander of canned beer, woodychandler, for this beer. Poured from a 16 oz. can. Has a cloudy dark golden color with a 1/2 inch head. Smell is of hops, pine, citrus, light malts. Taste is like a pine forest, medium bitterness, a touch of malts. Feels medium bodied in the mouth and overall a decent beer, but there are way to many better IPA's out there.

Conshohocken Brewing Co. "Harbinger of Change American IPA"
on tap at the brewery 22 May 2015

Notes: Slight haze, probably from dry-hopping. Golden body beneath a bright white head. Nice lacing. Aroma is fruity with some spruce and pine - much happier in flavor with raspy, piney and fruity notes (just gently citrusy and tropical). Balanced, and solid. Quite enjoyable.

I hope that Andrew Pope @ConshyBrewPope won't mind, but here is a recent CANversation:

"Hey - Bro Woody! How can we help you with your CANquest? Are you open to submissions, or are you still behind on your list?"; "Man, I am so far behind that it helps if nothing else shows for a while! I've got 7 of yours on deck. 8=("; "oh man! If it's harbinger, hold off, that is much better fresher".

While I have no doubt about the veracity of his claim, The CANQuest (tm) MUST forge ahead! I CAN always return to it, if need be, but this CAN has been well cared for in the interim.

You CAN see that part of the holdup was the lack of an approved pic. Mine are all taken using a camera on a tripod with the bottle or CAN atop the newel post on the second floor of Chez Woody, so they all have a similar look and feel. I beg of you, PLEASE submit your own pics so that it does not (seemingly) CANstantly fall to yours truly to do so. That is how beers fall out of my rotation and into the interminable backlog. Onward!

From the CAN: "Harbinger Of Change features a juicy blend of our favorite AmeriCAN hops against a backbone of Pale and Pilsner malts."; "Intense hop aroma, flavor, and a dry finish define this bold AmeriCAN IPA."

As CANfucius would tell you, the longest CAN review begins with a single Crack! If you are new to The CANQuest (tm), please understand that I am NOT a ticker. CANs do not Tick, they only Crack! & Glug!

The Crack! gave me a small spritz across my fingertips, but that was largely due to it being a brimful craft CAN. Foam began to slowly push through the vent, indicating that it wanted to go out, like a playful puppy. Down, boy! I need to get things in readiness. I used a slow, steady Glug, forming a foamy finger of French Vanilla-colored head from which I found fine retention. Color was an oh-so-slightly-hazy Golden-Amber (SRM = > 5, < 7) & so the Gelt Gang of Midas, Mammon & Croesus snubbed a taste. Nose was redolent with tropical fruits, pineapple being prevalent, followed by mango & papaya. Mmmm. Mouthfeel was medium. The taste was a wild amalgam of hops flavors, ranging from pine to grapefruit-citrus to tropical-fruity! It's better fresher?!? It would probably kill me if that were the case. Sorry, but the malt backbone was absent or hidden in this, but as a self-avowed hophead, I was cool with it. I tied off, jacked that spike in, hit the plunger & baby, I was flying! Frankie Machine & I were on a hops trip to the moon, man! Jeezus, but that CAN should come with a warning label - "Hot shot within!" or something like that. Oh, man, I have been jonesing for a while what with malty Belgians, Scottish Ales, all sorts of maintenance s**t until I could get back on the hops horse. Dig? Baby, I wasn't carrying a monkey around on my back, that f**ker turned into a gorilla at one point! Frankie calls himself "The Man With the Golden Arm" & I dig his groove, but my scene is "The Man With the Golden Palate". Those hops were just having a field day on my poor, starving tongue. I was amped up & ready to greet the New Year with a smile on my face. Finish was smooooth, man. Smooth as satin sheets & the current squeeze opening her arms to give me a warm welcome. Smooth as silk, running down my throat and spreading that liquid hops joy wherever it could. Oh, man, welcome to Hops World, baby! Henry ManCANi does our soundtrack, Dennis Hopper directs, and James CAaN is the producer. Man, the place wails! Now, dig, it ain't for everybody, nor am I suggesting it as a lifestyle, but for those of us in the know, the kool kats & kittens in the fold, this is it. Grab a CAN, Crack! it open, Glug! it into a glass, fasten your seat belt & get ready for takeoff! See you in the Funny Pages or in stores, wherever better beers are sold.

on draft. darker read in color, white head. a tasty red IPA. good combo of the malt and hop flavors. I like my hoppy beers to have some malt balance so this hit hits that mark.

Pretty good IPA, hop character could be a little stronger. Noticeable malt backbone, but not overdone. Very drinkable for 7%

ChrisKunda, Jul 17, 2015
Harbinger Of Change from Conshohocken Brewing Company
Beer rating: 86 out of 100 with 24 ratings