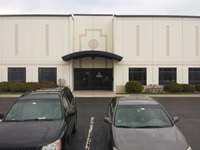 Warehouse building in industrial just outside Chicago. Spacious interior with high ceiling and a small bar on the right side of the entry that seats about 8 or 10. There are more than a few plastic tables spread about the room. A dozen beers on tap, I had the Vinyl Lawnchair ... tasted better than it named but not by much. Bartender was less than personable. After work crowd was lively. Seemed like a good place to unwind.

Visited with my wife on Saturday, around 1P.M.

Not much of a vibe so speak of when we arrived. The place is relatively large with a bar space and a few communal tables to the right of the entrance, and a much larger space with way more tables on the left. It is relatively large. Having said that, there may have been 7-8 people in the whole place on a hot summer day.

Quality is fine. It's not 3Floyds, or MoRE or Half Acre or the like, which you can tell try to create a certain atmosphere with their style. But it's not bad by any means either. Just no character. Seems like a place in an industrial park that was converted into a bar. Like a bigger Noon Whistle.

Service was sufficient. We were sitting at the bar and the bartender would ask if I wanted anything else as I pretty much finished the previous beer. Didn't try to engage in any chit-chat, which is perfectly fine.

Selection included 18 or 19 different beers. A couple of imperial stouts, some hefe's some IPAs... a few different styles. However, the knock is that some of their best known beers weren't available. I somewhat understand not having the Vlad series beers on draft, but Cumulus, Nimbus... those are IPAs and should always be available.

Not a bad place, but I'm not sure I'd go out of my way to get there again, especially considering the no food option.

Have ventured many breweries in the Midwest to date...esp since I live in chicagoland...Hail Storm’s quality of beer is THE most top knotch!! They don’t rush a brew and u can always expect a mouth watering experience full of body and flavor like none other...Only wish the guys weren’t so anti-social...smile, y’all! Lol

Ended up staying in Matteson, IL for a recent beer meet-up - proximity to Hailstorm was actually a pivotal factor in where we stayed. This ended up being a bit of a regret of mine, unfortunately - this is sort of the nature of my visits to Chicago though... lodging is never ideal. It's either too expensive, the traffic is unbelievable, there's no parking, it's in a violent and shady area, or it's just a shithole. Really... no ideal options.

So, the area worked. We ended up visiting Hailstorm on Saturday afternoon - our third brewery on this trip (the first two being Revolution and Pipeworks - very stiff competition...). Of the three, the comparisons are stark: Hailstorm is in an industrial complex - very suburban - without much of a veneer of comfort or hominess to it. It's definitely functional, but not a comfortable spot. I was hoping the beer would make this all irrelevant, but that ended up not being the case: there were a large number of taps, but of the large flight of stouts I ordered, most were very middling - the most recent vintage of barrel-aged Vlad tasted hot and thin, and the barleywine tasted far too sweet.

The service wasn't tremendously friendly, but helpful at least. What I did appreciate was that the place seems to be primarily for adults - no families in evidence, no dogs. I like those things as well, but this place seemed more purpose-built: it's a hangout for adults to drink and hang out and possibly listen to music. I can get behind that.

It really could use some polish and character though.

A rainbow of beer styles. One of the best microbrewery sasions I've drank!

Went to Hailstorm for a Vlad release. The beer at Hailstorm, especially the Vlad series, is amazing. My only gripe is the size of the taproom being very small.

Hailstorm has a nice, laid back vibe and an impressive selection of beers. The tasting room is small but on both our visits they had set up tables throughout the brewing area and warehouse. That probably quadrupled the seating capacity and they certainly needed it during our last visit early on a Saturday evening. Our only complaint is the bar is small and restrooms only one-holers which frequently resulted in lines by both.

We noted about 16 beers on tap, including no fewer than 5 beers with >10% ABV as well as several different IPAs. Almost all of the beers we tried were excellent save for the Cirrus Oat IPA which did not impress. Prices were very reasonable considering they poured 20-oz. imperial pints of all but the high-ABV beers. Curiously, as the evening wore on they switched to plastic cups. That kind of cheapens the experience a bit. The two girls behind the bar were very efficient, so at least the lines moved quickly.

Hailstorm does not serve food although you can bring your own and they often have food trucks. Dogs are apparently welcome, which is always a plus in our eyes. Really the biggest negative is we live far away, so this can't be a regular stop for us.

Awesome industrial style brewery. Very knowledgeable staff and great beers. Definitely one of the best up and coming breweries in Illinois.

Small bar and seating area inside the brewery. Industrial feel to the space with a full view of the brewery operations. Bar area is nice - has about 15 or so taps with lots of beers from the brewery. Full lineup of crowlers, howlers and growlers available. Also they have an expansive array of their cans and bombers to go. With the selection of beers on tap and to go, you can't ask for more from a brewery tap room. Service was solid, but not overly friendly. Bartender kept going back into the brewery - however this was mid day so I'm sure it was just because of the time. Their beers are really well done overall. Definitely a solid brewery.