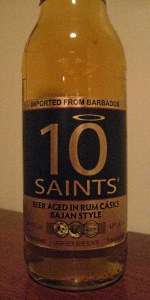 Pale gold pour (4) with white head; quick cap reduction; spotty lace at best; excellent clarity. Biscuit and slight rum nose. A little rum flavor with lite malt and lemon. Lite watery body, but a dryness in the mouthfeel. Slightly more interesting than the other island lagers; and I've had some presumably older bottles where the rum is non existent; hard to believe in this climate (Barbados) the beer is in a clear glass bottle...

Poured cold from bottle into a tall narrow beer glass. Nice foamy white head with good retention. Mainly clear light straw colour with slight haziness. Light grass and citrus scents. Taste and mouthfeel were good. Overall I enjoyed this more than I thought I would. It had a nice refreshing flavour and I imagine if I drank it July rather than February I would like it even more. If you assume it will be a corona-type beer you will be pleasantly surprised.

A pretty nice beer kinda just reminded me of Corona with a slight rum taste to it and it's the same % as Corona. Makes it a nice summer beer but nothing else to special about it.

This is basically an average Caribbean lager with a twist. The beer is aged in rum casks. That lends a little extra flavor. The beer is fairly light in body and light in color. The rum casks add some oak notes and a bit of texture but this is still an average beer. Worth drinking if you're in Barbados but not something to be sought out.

This pours a clear golden colour with a finger thick white head that settles into a mousse like quality. Now the first thing I noticed when pouring was a skunkiness that I immediately attributed to the clear bottle, but it actually has more of a cannabis note than your usual sun struck beer. The grassiness is also mixed in with a sweet malt and mild vanilla note. Now for a beer that is supposedly barrel aged in rum casks I don't get much wood or rum for that matter. When I took my first sip there was a woody tartness but it immediately disappeared. There was a lingering bitterness but no real hop flavour. In actuality there isn't much flavour at all and the mouthfeel was a bit on the watery side. Now is suppose if I was on the beaches of Barbados and this was ice cold it would be a bit more satisfying, but right now nothing made this stand out.

This beer pours a clear, pale golden yellow hue, with a teeming tower of puffy, loosely foamy, and nicely frothy eggshell white head, which leaves some randomly splattered lace around the glass as it swiftly abates.

It smells of bready, crackery pale malt, an underwhelming caramel sweetness, weakly woody light rum notes (the lesser-known alcohol-free sort), a touch of earthy vanilla, and weedy, grassy, and faintly skunky hops. The taste is more of the same - gritty, grainy pale malt, a wisp of caramel that I now grok as being rum barrel borne, along with its other vanilla and brown sugar inherencies, and fading weedy, mildly citrusy, and grassy hops.

The carbonation is quite lively in its tacky frothiness, the body a decent medium weight, yet sort of sticky and pithy in its attempt at smoothness. It finishes a whole lot less sweet than I was expecting - more of a plain grainy and neutered rum joint, as it were.

Nothing great, but nothing really all that off about this either, save a bit of initial olfactory skank. The biggest casualty here is the rum, which simply doesn't come across particularly well. It's there, sure, but in a very stripped-down sense. And what's with the sub-5% ABV for a barrel-aged affair? I guess I'm just not on island time, or something.