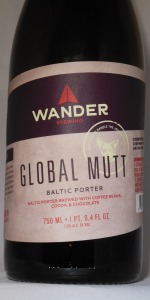 3.9/5  rDev -0.8%
look: 4 | smell: 4 | taste: 3.75 | feel: 4 | overall: 4
Poured from a can at fridge temp. Pours black with a good amount of tan head. Nose is chocolate, coffee, vanilla, marshmallow, and some roasty notes. The taste follows the nose. Chocolate fudge, coffee, a bit of black licorice, some charred wood, molasses, and some dark fruit. Really tasty. Mouthfeel is full bodied with a strong roasted malts aftertaste.
Jul 28, 2022
Rated: 3.92 by Abstractspirit from Rhode Island

Reviewed by Beaver13 from Colorado

The flavor is sweet chocolate malt and black licorice with a heavy roast finish with a little coffee. The mouthfeel is medium to full bodied with smooth carbonation.

Overall, I liked the chocolate, but the licorice seemed out of place and the roast was a little strong with not much coffee to it.

Reviewed by Roy_Hobbs from Connecticut

3.77/5  rDev -4.1%
look: 4 | smell: 3.75 | taste: 3.75 | feel: 3.75 | overall: 3.75
Pours an opaque dark cola brown with a finger or so of medium-tan colored head that was beautiful while it lasted. Plenty of roast on the nose, accompanied by chocolate and a hint of smoke. Plenty of roasted flavor with maybe a little more smoke than ideal of the style, but that's my gain, as I like burnt / smoke flavors quite a bit. Less sweet than I expected, likely due to the dominance of the roast. Feel is smooth and fairly full-bodied. Maybe a little imbalanced, but still a nice beer.
Mar 19, 2022
Rated: 3.94 by shelby415 from Oregon

The cocoa and dark chocolate are forward on the taste, but it’s that roasty coffee that appeals so much to me with this beer - it’s rich, decadent, and packed with flavor at 7% ABV. Outstanding stuff.

Reviewed by Pinz412 from Pennsylvania

3.96/5  rDev +0.8%
look: 4.25 | smell: 3.75 | taste: 4 | feel: 4 | overall: 4
Beautiful dark brown pour, almost black, with a one inch tan head. Aromas of malt, slight coffee, cocoa, and an overall roasted quality. The taste was of big roasted malts with a finish on the bitter side. I would never have guessed that coffee, cocoa nibs, and chocolate were used in the brewing, but that's not a bad thing. A medium body kept it easy drinking. I would hesitate to call this a dessert porter, and instead just call it a solid baltic porter. Nicely done.
Jan 05, 2021

A- Black with a large tan head.

O- An enjoyable chocolate/coffee porter that’s easy to drink. Flavors could be bigger but they are nicely balanced.

Reviewed by SouthernSips from Mississippi

She developed a very thick, abundant light to medium brown head due to a slightly over-aggressive pour but it quickly subsided to a persistent cap of medium brown bubbles on top of the beer. I'm not getting much coffee from this beer but I am getting a lot of dark chocolates and caramel malts, especially in the back of the mouth. The mouthfeel is not thin but also not thick and it leaves a dry, almost crisp, feeling in the mouth after swallowing. I really enjoyed this beer!

4.16/5  rDev +5.9%
look: 4.25 | smell: 3.75 | taste: 4.25 | feel: 4.5 | overall: 4.25
Poured a dark and clear brown. The pour produced a large and creamy tan head that only reluctantly settled, leaving some nice splotchy laces. The aroma was refined but dominated by chocolate, with only a hint of coffee and roasted grain. The taste was more balanced. There was a rush of bitter coffee up front, which yielded to allow dark chocolate and a roasty flavor to appear. The finish was punctuated with a slight ashtray char which played well with the bitterness. As expected, I could not detect any yeast esters and this allowed the grain and adjuncts to shine. The feel was silky-smooth and clean. Medium-bodied and too easy to drink. Outstanding.
May 13, 2018
Rated: 4.19 by westcoastbeerlvr from California

Reviewed by Prager62 from Colorado

Look- Pours a thin cola color producing a small finger of light tan foam that settles very rapidly. No lacing is left behind.

Feel- Very thin and light with a dry finish.

Overall- A solid Baltic porter complemented by the addition of coffee beans, cocoa and chocolate. I wish I tried this fresh to see if there was a greater coffee presence from the beans? That aside, it's still a very solid beer worth checking out.

Appearance: totally black with just a little bit of brown around the edges. Head is a finger of frothy tan foam with good retention. A great looking beer!

Smell: rich coffee aroma with a nice roastiness. Sweetness is present but not overbearing. A good Baltic porter.

Taste: nice roastiness and coffee flavor atop the classic yeasty base of a Baltic porter. Bitterness is nice, although the hops are a bit vegetal in character -- again, a risk for the style. Good, but the vegetal hop quality kind of detracts from the experience.

Overall: a pretty good example of the style. Very drinkable for a 7% beer.

Sniffing what's left in the bottle, I get bitter baker's cocoa, earthy coffee, dark roasted porter malts, a rich chocolate ganache and a touch of cherry. Quite lovely and well balanced in that regard. Unfortunately, that's not what's in my glass.

Even after waiting five minutes, topping off the teku, giving it another fifteen minutes and decanting that into a second glass, the main thing I get in the aroma is carbonation. There's some chocolate and roasted malt buried behind it.

The taste is similar. Some chocolate, roasted malts and a hint of coffee in an ocean of carbon dioxide.

What's shocking is that the mouthfeel is not ridiculously over-carbonated. It's medium bodied, and has a soft, slick, creamy feel to it, that's, yes, a bit over carbonated, but not nearly as bad as I was expecting.

If they figure out how to correct the massive carbonation flaw, I'm sure this would be quite tasty. The bottle says "certified to handle the journey" right on it, so I feel justified in rating this one now.

Reviewed by kemoarps from Washington

Nose serves immediate reminder that coffee beans were involved in the brewing here, with chocolate and char supporting.

More carbonation than I would typically look for, and maybe a bit thin, but the follow through and aftertaste and whatnot more than make up for it.
Flavour presents with a rich roasted coffee up front once again, with the bitter beans Drawing contrast from a syrupy fudge-like chocolate ribbon. Finish is bitter as it dips back into the coffee (is for closers). Finish is primarily bitter coffee and bakers chocolate, but with occasional pecks of sweet cocoa.
As has been noted this is not your standard baltic porter. What it is, however, is a dream for anyone who loves coffee and chocolate in their beers. I was thoroughly impressed and will probably make it a semi-regular member of the rotation.

Reviewed by cavedave from New York

Black and very thick looking with a finger of tan foam that's quick to kick back.

Wow a blast of chocolaty goodness leads all the flavors of the nose plus some raisin flavors added to the mix. The mocha is so delicious, and the flavors just get better as it hits room temp.

Fantastic beer that I don't hesitate to give high recommendation