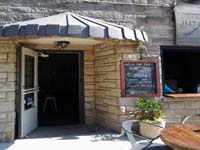 Rated by mellonsm from Pennsylvania

Reviewed by DeaconWhite82 from Pennsylvania

Reviewed by mrl2112 from Pennsylvania

Reviewed by Reggie_Dunlop from Pennsylvania

Rated by damonhoff from Pennsylvania

4.31/5  rDev +7.2%
vibe: 4.25 | quality: 4 | service: 4.5 | selection: 4.5
A neat modern brewery with big wide open area. It's like they took a big warehouse and slapped a bar in the middle, with brewing stuff way back behind it. Plenty of high top tables and benches, fairly clean and modern feeling. The bartenders were very friendly and knowledgeable, and helpful when ordering. They fill crowlers on spot which held up pretty well.
For beer selection, maybe 10-15 of their own beers, some great quality and some less so, and a cider, a mead, and I think a guest brewery also on tap. Not too busy, but we were there very early afternoon on a Thursday so not expecting it.
Jan 12, 2018
Rated: 4.32 by oriolesfan4 from Maryland

Rated by Beermann60 from Pennsylvania

Reviewed by Kinney1989 from Pennsylvania

Rated by PMcKenzie2004 from Pennsylvania

Reviewed by Fee from Pennsylvania

4.2/5  rDev +4.5%
vibe: 4 | quality: 4.25 | service: 4.5 | selection: 4 | food: 4
Cool little hide-away joint in a somewhat awkward bend in the road... Has an informal clubhouse feel, with a nicely shaded deck in the back, and outdoor patio seating in the front. Narrow barroom with L-shaped bar that seats about a dozen with tables on the back wall and counter seating on the front wall that is open to the patio. Nine beers on tap, I had The Barbarian and Hammer & Wedge, both excellent. Hitchhiker has a crowler machine and offered a great 3 crowlers for $26 deal. They have a somewhat limited floating menu, but I had the pulled pork tacos and they were exceptional. Great friendly service... highly recommend.
Jun 19, 2016
Rated: 3.23 by nei9970 from Pennsylvania

Reviewed by brother_rebus from Maine

Reviewed by WVbeergeek from West Virginia

4/5  rDev -0.5%
I was very happy with my first visit out to Mt Lebanon, an quick and easy drive from Bridgeville, PA. I took 50 to 19 with a left on Washington then almost the next right on to Castle Shannon Road. Very easy to find, assuming mixed residential area with one restaurant next door.

I met Sam the female bartender, and Matt a good team who kept everyone at the bar well hydrated with the libations the are brewing downstairs in a 3 barrel system. 8 beers on draft with one mead from Apis and one Arsenal cider. I had good conversation with Frank and Dan two regulars who have been here since they opened back in May. They both concur that the beer is getting better and better each month out of the 8 beers only one truly missed the mark. It was Yeoman Fresh Hopped ale, an experiment for their brewer. I got no hop character and even found some off flavors wet cardboard, butterscotch. The only beer that has either been on too long or had some oxidation issues from the get go. I expressed some constructive criticism that I felt was received well from the owner and bartenders. The porter was the standout of the bunch, black saison rock solid with limited spice notes from a Belgian yeast strain, Roadie IPA way to easy to drink with a nice hop character, Fest Bier with a german ale yeast still quite quaffable, the pumpkin was balanced between spices, pumpkin, and sweetness I feel they nailed that one as well. Belgian Red the Drifter 002 was well made slightly tart but not as sour as most flemish style reds around. Cobblestone Kolsch did the trick clean refreshing no off flavors.

These guys have a ton of potential, I'm happy to see another Nano making well executed easy to drink beer...Cheers to Gary the owner, his brewer, and staff. I'll be back, I hope to host a cigar event out on the back deck once the warmer summer months return!