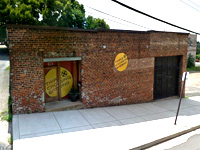 Rated by vabeerguy from Virginia

4.39/5  rDev +4.3%
vibe: 4.25 | quality: 4.25 | service: 4.5 | selection: 4.5
Smaller and darker place in a nondescript kinda neighborhood, small parking lot in the rear, I entered after walking cross the smallish and covered outdoor deck with a long table in the middle and several smaller tables. Brewing tanks and equipment right behind the bar.

Friendly and informative fellow behind the sticks, loads of quality options for cans to go of the juiced up NEIPA, I had come looking for.

I enjoyed a super tasty hazy Falcon Smash or two that they pump out in a high quality fashion.

Cozy spot that is worth a visit.

4.47/5  rDev +6.2%
vibe: 4.25 | quality: 4.5 | service: 4.5 | selection: 4.5
“Richmond is not a walking town” – Ben, on the way here from the hotel. And he’s quite correct. It wasn’t so much that it looked so close on the map but didn’t seem that close in real life walking there, I think it was more that there was lots of up, and then a little down to lure you into the false sense of, oh fuck, more up! Stupid hilly city! Davo nearly defected for an Uber, and Witzel thought we were going somewhere else entirely. Down the hill backwards…

Somebody thought he had himself a short cut but we arrived first just the same. A standalone of brick on a slight incline, we enter in and it’s airconfuckingdishioned, and thank you! Open space and the bar to the rear; straight multi-toned wood laminate topped, bolted stainless steel panel base, and a wood beam foot rest. Seating on squared stools for 10. Barback is nonexistent, by which I mean there are serving tanks (like) right there (me, pointing) and others behind them receding into the darkness.

Concrete floors, wood rafter ceiling with some large I beam action, brick walls all around with some light house beer can art and a large mural up front all colorful greens & blues. Drop suction cup lighting throughout the room, and I think there may be something skylightish above but cannot tell so easily in this light, or lack thereof. 2 flatscreens mounted above where we’re sitting barside; one is showing the woman’s tennis quarter finals, the other listing the draft selections (beer, style, ABV, & pricing).

Glassware countered and racked behind, a can & bottle cooler at the end of the bar getting some good play while we’ve been here, a swag hat & shirt rack over my shoulder, and some shelving with a cubic shit ton of board games for the play. 4 long hightops, 2 shorter plank top tables further down, and an outside deck holding a half dozen plus tables.

I sampled or shortied the Kellerbier (yum factor 6), Proximity Project: Blackberry Sliced (dry as actual fuck), Mesa (easy, lovely), Falcon Smash (dank, mad tasty), & Salinity – Lime (good gose!). Everything was very nicely done. Seriously, not a clunker in the lot. For the most part, beers are served in 4oz (sample size), 10oz (shorty), and then 13 or 16oz full pours, and they fill crowlers, too.

Loutending just now. He knows what the what. They do light foodings here that seem to be mostly about the gourmet grilled cheese sandwich, and some other light light eats. The beers were clean and very well done. You should be drinking here. I don’t know whose idea it was to come here but I’m going to have to be nice to someone.

Space isn't huge, seats maybe 50-60 people, with about 10 seats at the bar. Coolors for cans and crowlers right next to the bar. Vibe is laid back and casual.

Tap list is about 12 strong, with a lot of variety. When I went, there was everthing from a couple of sours to a barley wine and stouts, and of course, the hoppy stuff TC are known for. Every beer I tried was really good and well made, with the double dry-hopped Falcon Smash being the best. They do serve pizza, which seemed like it was made somewhere else (Fulton?) and heated or baked on site. It was very tasty.

Service was quick and friendly, and the bartender was happy to chat when he had time. The clientele also seemed very open and friendly, as I had a few really nice conversations.

Rated by james24 from Virginia

Rated by PhineasMcClintock from Massachusetts

Rated by drds89 from Virginia

Reviewed by bl00 from Pennsylvania

4.3/5  rDev +2.1%
vibe: 4 | quality: 4.5 | service: 4.5 | selection: 4
This location is the smaller of the two, located in the city. Parking is mostly street spots with a small lot. Ambiance is old warehouse, though clean and filled with art. Service was great, beer selection was mostly IPAs with a stout, lager, and saison. Didn't get to try the food. Great beer overall, won't hesitate to return next trip
Oct 08, 2018
Rated: 4.04 by ScaryEd from New Hampshire

Rated by CChafin from Virginia

Reviewed by Semh57 from Virginia

4.5/5  rDev +6.9%
vibe: 4.5 | quality: 4.5 | service: 4.5 | selection: 4.5
They have a Brewpub in downtown Richmond,VA and a Brewery/Taphouse/Restaurant on east side of Richmond (area called Fulton!). Both excellent places to grab an exceptional beer. I have been there many times and the service is great! Very knowledgeable staff and friendly! Highly Recommended! SEH
Mar 26, 2018
Rated: 4.22 by reebtaerG from Maryland

Rated by Mikecoch from Virginia

4/5  rDev -5%
vibe: 4 | quality: 4 | service: 4 | selection: 4
Arrived here on a Saturday afternoon and it was pretty full, was surprised there were so many people so they've got a good following going on. The selection was pretty solid, the crew was very busy but were impressively serving everyone in a pretty well organized manor. It's a pretty nice place, worth checking out when in the area.
Oct 14, 2017
Rated: 4.61 by Roser from Virginia

Reviewed by BEER88 from Washington

4.5/5  rDev +6.9%
vibe: 4.5 | quality: 4.5 | service: 4.5 | selection: 4.5
Two locations in Richmond VA and at both locations the service with the super friendly staff was great. Selection was normal but quality of their beers are tasty! I will always visit this brewery when in Richmond. Cheers
Sep 01, 2017
Rated: 4 by atrocity from Virginia