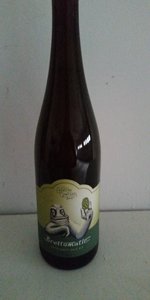 Nice clear pour with tons of fluffy head. Smell is strong hops which seem to overpower any possible brett notes. Flavor on the other hand is far more balanced, plenty of piney hops but it's balanced well and dried out even further by the brett. Despite all the hops there isn't much bitterness. A really nice beer that went quite well with some spicy curry.

2015 bottle, enjoyed from a creature comforts crave curiosity tulip. transparent golden pour w frothy head and vibrant carbonation. nose is a bright crisp citra hop with a heavy dose of brett to cleanse the pale ale ala crooked stave but not as good....the Brett definitely caries a light plastic funk on the brew. all in all good, but nothing insane, and definitely not something I would put effort into hunting down again.

Pours a pale orange tinged yellow with two and a quarter finger near white head. Hazy sheet remains and the full, fluffy collar imparts a few scattered clumps of lacing.

Aromas of earthy funk, hay, barn and mild citrus peel. The hops are significantly more subdued in this bottle than they were several months ago at their See The Stars release.

Taste follows the nose rather well. Funky, earthy Brett, faded grapefruit, vague pineapple, dough, hay, berry seeds and some mild caramel. As in the aroma, it is obvious that the Citra hops have mellowed and the Brett has evolved since it was brewed months ago. This is so incredibly easy to drink with its lack of any alcohol and outstanding balance.

Brettomatic is another excellent release from Creature Comforts. They allowed the Brett to evolve for a few months before releasing so the Citra hops are present but take a backseat to the funk. Having tried this freshly brewed and then freshly bottled about 4 months later it will be interesting to see how this evolves further in the next 6+ months.

Brettomatic from Creature Comforts
Beer rating: 88 out of 100 with 56 ratings