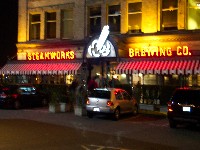 Summary: The food is better than the beer.

Crawling distance from the Convention Centre and many downtown hotels. Retro European vibe, black and with tile floor, lots of outdoor seating, two bars. It is a big place. I went there on a Friday afternoon, too early for it to be crowded. It too five or so minutes from the time I sat at the bar to the time I was recognized. Don't know what was up with that. While they didn't go out of their way to ask me if I wanted food or another beer, they were very open about what were some of the better Canadian beers available and other places in town I should check out once I let them know I was interested in drinking quality beer.

There were about eight or so beers on tap, with their stout on nitro. I sampled the IPA, Pale, and Stout. Nothing overwhelming, so I went with the IPA. Pints and Imperial Pints are available. Ordered the Montreal smoked meat sandwich as a light lunch at an unlight price (~12 CAD). At least it was very tasty. Overall tab was about 20 CAD before tip.

Would I go back? The food was quite good and it may be worth sampling something else, although the beer was nothing special.

Note: The owners recently opened a second location next door called Rogue Kitchen and Wetbar (not to be confused with the brewery out of Oregon).

A large venue in a very good location near Gastown and N. Vancouver ferry.
Their beer menu has about 17 beers on tap and features IPA/APA and sour style beers.
Excellent Thai Chicken Pizza.

Still going since the 1990’s, Steamworks has stayed current by injecting contemporary styles (ie. hoppy) while capitalizing on its outstanding location. The newer pub addition upstairs offers a good selection of bar and booth seating with a spacious atmosphere. Good selection of house brews on tap along with food from the restaurant. Friendly staff, efficient service and enough TVs to catch the Canucks game.

OK, I was surprised how much I ended up enjoying this place. I was expecting total tourist trap mediocre. Their beer is actually very good and the food is tasty as well. We were fortunate to get window seats during the noon hour without waiting, even though the place was very busy.

Huge place with an upstairs and downstairs. Had their Jasmine IPA which was well above average. There are pool tables downstairs. Didn't have any food, but it's a great place to go with a group of friends.

Spent a weekebd abd hit two microspots. Steamworks is in a great location in Old Vancouver. Had two raspberry frambosin. Outstandi g and strong. Downside is no bottles or offsale. Growlers only and can't take back to US.