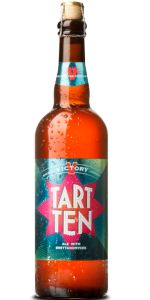 Copper, cherry and amber in its color, the pour is appealingly bright and its head is stained slight of sand. With a pass of the nose, cherry, apple, grape and faint cork graces the scent while its taste is lightly candied of fruit cola, hard candy and tangy orchard fruit.

With the ale latching onto the tongue, a host of pulled candy, fruit flavors and mild acidity plays on the middle palate with a sensation of cherry, strawberry, vanilla, and grape- all woven with a cola-like dovetail. Trailing sourness and bitterness are light and invites the earthen character of dried pineapple and oak even if ever so mild.

Bright yet lumbered, the beer's tendencies for sourness makes the senses beg for more. Understanding that there's a drier, sharper, crisper and more refreshing taste to be had, this bottle conditioned beer is capable of better delivering on its promises is cellared properly. As is, its sticky cola-like finish is distracting but its fruity tartness is charming as is.

Smells barrel aged. Almost like crayons.
Taste is oaky, lots of caramel malt, slightly tart, barely acetic, funky, delicious.
Would love to revisit this one with some years on it

Surprising dark amber/orange color with a shy off-white head. Subtle aromas of cherry and mild funk. Slightly sour taste with sour cherries, a clean lactic acidity, and a mild warming on the end. Not complicated but nice.

growler from Bobkat Deptford N.J..... I'm new to sours but this stuff is delightful. Tart taste hides the 10% like a thief. A strong effort from Victory.

Notes: Nice appearance. Clear copper colored body beneath a creamy head of off-white. The yeast pour brings up some haze, but there's surprisingly not that much yeast given that it's bottle-conditioned. Decent enough lacing, especially given that "sour" beers tend to leave less. Fruity aroma, perhaps black cherry, with clove and a touch of something a little more woody, kind of like cinnamon or cedar. It's interesting that you get that dubbel character in the flavor, I wasn't expecting that, but the caramel, clove, and candi-sugar thing comes through nicely. On the other side, it's not that tart, which I mostly expected from the Brettanomyces, but it's really limited in Brett flavor which I did not - I thought the Brett would over-ride the "dubbed". It's very rounded and balanced with only the moderate tartness giving it a bump. As it warms it opens up, becoming more malty, with the suggestion of more sweetness, but at the same time it also becomes a touch more spicy, and perhaps even shows a little bit of alcohol although it's really well cloaked. Overall I find it very much like an actual dark red cherry: it's fruity, there's a bit of woodiness or earthiness that the skin would give it, and it's a little pulpy (malty) sweet but also somewhat tart. I actually had this on tap at the pub last night and I don't think it really fit the bill, but sitting at home relaxing in the early evening I think it makes a great sipper; and I invoke this thought all the time, but it would make a wonderful beer to wind-down with, be it after a holiday meal, or just on a quiet night. Given the price I find it impressive, and I think I'll invest in a case to cellar.

The body of the beer was deep golden in color, and the carbonation modest. The aroma was quite laden with barnyard like smells thanks to the brett, with vinegar and lime like smells coming through as well. The taste was quite tart, with loads of lemon, malt vinegar, and lime, with the brett being not as much of a factor in the flavor. The body was light to medium thick, and the feel was quite quenching. One of the great things about it was the way it hid the ABV. The back label called this a Dubbel ale, but this was nothing at all like one. It was probably closest to a Belgian Strong Pale Ale or a Flanders Red.

The nose is surprisingly mellow, but with some coaxing I'm getting a fine blend of malt vinegar, gingerbread, apricot jam, honeysuckle and caramel. The flavor is mostly rounded and sweet with some tart sharp edges- the caramel comes out much more at first, along with the apricot and maraschino cherry mid-palate, and the finish is long and moderately tart. It's a lot more candy-like than I was expecting, yet simultaneously gentle and bordering on bland. Overall, it's easy drinking and non-challenging, with nothing truly standing out; I really have to focus to pick out any of these individual qualities. I will certainly enjoy this bottle, but doubt I'll be going for another

Big disappointment. No real tartness or funk. The base beer was not impressive by any stretch, which is often the case with American Dubbels. Can't tell if it needs time, it can only improve, but I don't have high hopes. By far the most disappointing beer I've had from Victory in a long time.

Buy two bottles of Helios for the same price and be amazed.

A - Copper bronze color, crystal clear and a micro-thin lacing ring, no carbonation.

T - Sour and tart, some fruit loops, cherries. This one is hard to peg.

Opens with a decent pop, pours an effervescent copper with scant beige colored head. Some head retention & lacing, some

T: Follows the nose, almost a cherry juice flavor here, a little bit of almond & a little Mandarin Orange up front. A little leafy hops fights through the tartness/sourness as this warms, a smidge of booze warmth shows as well, oaky dryness too. Finishes oaky dry, with sour cherry & with a little acidity

ABV is fairly well hidden, still a sipper though. Pretty good, so happy to Have Victory in Arkansas!

Floral, tart fruit nose with a hint of barnyard and dried plum. There's caramel and lemon in the flavor as the Brett works with the underlying beer. I wouldn't guess this is 10%. It's crisp up front and then veers toward sweet in the finish, without getting thick. Worthy trying.

A: The beer is a dark coppery gold color, with a thin short off-white head that fades slowly and leaves a thin lace on the glass.

T: The taste starts out with tart flavors of cherries and grapes. Then some breadiness comes in from wild Belgian yeast and a hearty but not too heavy malt character. The hops presence is very mild but brings a good balance. The after-taste is slightly tart.

O: Tasty, goes down ok, not too filling, strong kick, good representation of style, this is a decent sour beer to drink for a while.

A: This poured a hazy dark gold with quickly dissipating head.
S: It smelled like tart cherries and apricots, with some citrus zest and grassy hops and brown sugar.
T: It tasted like sour cherries and sweet brown sugar, with some tart apple cider and citrus zest. It had a clean tart aftertaste.
M: It was watery with moderate carbonation. Decent body.
D: This was a nice brew with simple but refined scent and taste. Nice and clean and crisp. The body was a little weak, but the finish was smooth with well hidden alcohol, so it was quite easy to drink. No need to age, it's good to go fresh. Nothing ground breaking, but I would drink this again.

Overall not a very good beer, pretty sure they were trying to make a different beer and it accidentally got Brett in there but now the unintentional Brett slimy sourness, not very good.

look: handsome light copper. Hazy from all the rising bubbles. Nice head on the pour that mostly recess.
smell: Mostly tart with some malt backbone. Interested to see what happens to the nose as the beer warms.
taste: a bit of tart and a bit of sweet. No hint of alcohol and zero bitterness. Very smooth, remarkable for a fairly big beer.