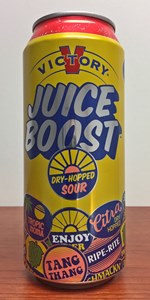 Notes: Experience tart and tangy flavors and aromas reminiscent of a delicious glass of juice from the combination of Citra dry-hopping with an expertly executed natural souring process.
View: More Beers | Place Reviews
Recent ratings and reviews. | Log in to view more ratings + sorting options.
Rated: 3.4 by TMoney2591 from Illinois

Upon tasting, it's pretty fruity, mildly tart, and a tad funky. The mix is pretty nice.

Mouth is around medium, finish a little bittersweet.

Overall, maybe age helps this one a little bit, because other than the nose, it's pretty enjoyable.

O: A tasty beer... they played it VERY safe with this one, and it drinks kind of like baby's first sour. Mildly tart at best... but fruity and enjoyable. A hard beer not to like.

Smell: Tangy, tart nose with some citrus accents and a touch of lactose.

Taste: Tangy, a bit sharp in its acidity. Minimal base maltiness, a little bread and only just a whisper of milk sugar sweetness. Lemon-lime citrus, albeit rather mild. Lightly bitter. The tanginess and sweetness ride out through the sweet-tart finish.

Overall: Kind of a snoozer. This one leans so safely, so mildly that it blows when taken as a hop-forward beer or a sour or whatever, really.

Smell is tart, citrus aromas like a fresh squeeze of grapefruit and hint of lemon rind, hints of malt sweetness.

Taste follows with tart, clean lactic acidity with citrus sweetness and flavor and some light maltiness. I don't pick up on the lactose but it is sweet.

Mouthfeel is low to moderate carbonation, tart sourness, then some drying.

Overall a good clean sour with definite citra hop notes in the aroma and flavor; sourness is clean and light sweetness lingers.

The pour is hazy gold with a wispy head. The aroma is light and fruity with some mild juice nodes. Very smooth.

The flavor is great. Real fruit juice up front, quenching dry/sour yeast on the back. The body is a bit thin, but otherwise this is excellently made.

3.36/5  rDev -8.7%
look: 4 | smell: 3.5 | taste: 3.25 | feel: 3.25 | overall: 3.25
DATE: May 10, 2019... OCCASION: chilling on a Friday night with the family, ready for a sour ale--a style I haven't had in quite some time... GLASSWARE: Duvel tulip... pours a sallow golden yellow body, bubbly and misty with sediment settling to its depth... its single-fingered head is off-white and clumpy, leaving a web of coral unevenly around the glass... this bites the nostrils with funky barnyard yeasts, earthy roots, pear, parsley, basil, and other garden herbs, while hints of lemon and mango to up the interest level... a mild buzz forms at the teeth, while its passage is like orange juice--contentious and acidic... its finish lingers with a dry, punchy warmth that manifests tartly... but tart and tangy? a bit soft for the ABV and the can's busy declarations... the flavor profile is busy, with the funk becoming hard fruits and faint herbs, the tropical fruits diminishing into a white noise of acid and lemonade... I get what this is going for, and Victory always gets the benefit of my doubts, but I am glad I bought but one of these at Wine Country... I would rather pucker up for something more intense or sip something worth more discernment... instead, this straddles a few worlds and lands somewhere nondescript...
May 11, 2019

Reviewed by good_to_sea from Pennsylvania

Rated by Carterwiese from Washington

Smell is huge hit of pineapple and over ripe fruits. Something like a sweet milkshake smell along with some hop bitterness, leaning towards pine, in the background. Extremely complex nose on this one.

Taste is sweet first tart second and a bit of sour on the back end. Lots of pineapple and over ripe fruit on the taste. The hops just dance around in the background in an attempt to ground the sweetness.

Mouth feel lends toward the medium side with a bit of a sticky finish.

The 7.2% ABV is well hidden in this unusual offering from Victory. I have to say this is a refreshing and thirst quenching beer. A bit on the sweet side but not as bad as some beers can be. I do like this beer and think it would work well as a nice summer beer. I really do not think I would do more than one 16. oz. can at a time though.

3.69/5  rDev +0.3%
look: 3.75 | smell: 4 | taste: 3.5 | feel: 3.5 | overall: 3.75
Golden yellow in color with a finger of fizzy white head. Aroma is big on pineapple with an orange juice back. Taste is semi-sour but the overripe fruits and citrus kind of flatten it out a bit. Citrus is almost overripe and the mouthfeel is a bit too sweet and cloying. Finish is of ripe oranges yet also a bit refreshing like fresh squeezed juice, too. Just wish the souriness had been a bit more dominant
Mar 14, 2019
Rated: 1.3 by likefireflies from Virginia

Notes via stream of consciousness: Firstly, I can't believe they got federal approval for the name as "Boost" seems like something they would have shot down before. They shot down Dogfish Head for having the words "vim & vigor" on their label. Whatever, it's poured a hazy straw gold beneath a short fluffy white head that falls back into itself. It's a hoppy aroma with hop resins, some "dankness", lemon, and a hint of peach. The label lists Citra and I can believe that although it seems there are other hops in there as well. Oh, and I should point out that it does contain lactose. OK, the flavor is tart but not that tart, also also quite sweet, a little bit more like and energy drink or malternative than a beer. It's not that bitter at all but at least the hop flavor is there. The lactose adds to the feel and it's medium bodied and delicately crisp. The alcohol never shows but I'm glad it's at 7.2% otherwise I might not feel that I got a lot out of this. Maybe it's helping to balance it a bit but in the end I find it overall to be to sweet.
Review# 6,498

S: pineapple, fleshy-juicy orange rind, floral spice; bit of a musty funk in the background... mostly getting hops on the nose; the 'wild' character creeps in gradually, eventually settling in a mellow balance with the hops, lending a dried tropical fruit tone

T: way more juicy hop resins and base malt than expected; big hit of a blend of mango/pineapple, leaning heavily on the former... aftertaste is somewhat dry, with a light funk lingering, along with heavy tones of grapefruit, mango, and a touch of lightly-bitter fresh-cut grass... seems like there's a nice balance between the tart and funky elements, but neither are bracingly bold... has a malty pina colada thing going

F: light foamy touch to its nectary, silky viscosity... there's a soft sizzle in the finish, but it doesn't diminish the initial milky attack of its body; finishes softly clipped, with the hop bitter and booze leaving a soft heat and refreshing hum at the front of the palate

O: I was not expecting this degree of brightness and intensity in flavors... lovely drink, but it's more of a 'sour' APA or IPA than a 'traditional' wild/sour ale

Rated by The_Beer_Guru from New York