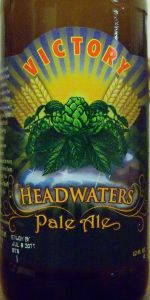 Notes: Crisp and aromatic, this boldly-hopped American ale balances notes of citrus and tea-like earthiness from American hops with a subtle German malt base.
View: Beers | Place Reviews
Reviews: 623 | Ratings: 2,633 | Log in to view all ratings and sort
Reviews by thinwhiteduke:

I recently consulted with a brewery that was soon to be starting up and when they asked what beers I thought they should brew (which was really the LAST thing to consider given the many unanswered questions regarding just getting the brewery built!), I told them "forget doing a pale ale and just brew an IPA". My point was that hops are what's selling now; and that a lot of beer geeks just aren't interested in basic pale ales anymore - they want "WOW"! Besides, it's a very hard sell to get your pale ale on tap when they're already being squeezed out by different styles (Belgians, IPA's, ...). That said, I'd questioned why Victory, or any brewery would bring out a pale ale at this point. I didn't know what to expect of it, but now I do - it's got some "WOW"!

There are a lot of breweries making IPA's that are really just hopped up pale ales. That's not even an option for Victory given their IPA's. This is a pale ale. It's medium light in body and drinkable. The bitterness is at a reasonable level, somewhere around 36 IBU's; and it's got a nice, caramel-drizzled malt base to it (giving a nod to its English ancestors). The difference is they've used some new and different American hops. I'm not sure what they are, but there's a sharp edge in the nose, and at the front of the mouth in the flavor. It's pungent and somewhat citrusy (tangerine). That's the attention grabber! Unlike a lot of other breweries that would have just taken that and run with it (read as - hammered you over the head with it), Victory has decided to go for more balance. They've blended their hops so that it's not just one gleaming component that blinds you from the rest of the beer. It's right up there in front, yes, but then it settles down and you find more leafy, floral, earthy, and even somewhat piney hops across the middle. There's a lot of character, but the hops still don't overwhelm the malt. It just goes from sharp at the beginning, to wide and malty with more bitterness showing across the middle, and then it steadily reduces in a dwindling finish that's more earthy/piney than citrusy. Everything is kept in balance, which leaves it remarkably drinkable.

The only question is, are today's craft drinkers savvy enough to recognize that balance, or will they still be blinded by the next bigger and better (read as less-focused but brash or bold) thing? Headwaters is a great American pale ale that carves its own little niche; and hopefully will be rewarded rather than passed over.

Really good APA, dry, not heavy on the tongue. It has more hop flavor than bitter which I like, and a little more in the lemon / citrus hop zone than piney / resiny. According to their web site they only use 2 row malt but I would have thought there was a little pilsner or something to give more complexity (although the site says malt is imported, maybe that's the difference). Would buy again.

Pours clear golden amber with a scant head of bone white foam that fell fast to a cap and ring. Left nice lace and constantly refreshed. In the right light has an orange hue.

Nose is out of this world. Citrus, lemon and orange with apple behind that. Light malt sweetness, grains and light bread. Generous spice, sweetly floral and herbal.

Taste follows the nose all the way. Citrus twang greets you first followed by a light sweet malt. Cereal grains carry it to the back with an earthly presence and a healthy helping of spice to tingle on the tongue. Ample carbonation lightens the body. Mouthfeel is sticky, creamy, crisp and light. The apple is sweet and tart like a good apple should be. Lingers whole in the aftertaste with no one characteristic able to be separated from the others. Terrific balance and the aftertaste has a slight mineral quality.

This is one of the best pale ales you will have. It's refreshing, it's delicious, it's well made and you want to have it always in your refrigerator. It's confident and brisk.

Victory Brewing is awesome. This one is a 5.2% ABV, but it paradoxically drinks like a 7% which is awesome.

Look-It pours a pale amber golden color with a white head that diminishes into a thin film.

Taste-It tastes brilliant with a clean and crisp citrus, floral, pine, and then some more citrus hop flavor. It is juicy and bright and leans on apricot, pear, and grapefruit rind. Some toasty and honey malts play with the hops, but it isn’t hop-forward. It is a fair beer to both the malts and the hops, and both do a great job of expressing themselves in a very pleasant fashion.

Mouthfeel-It is crisp, bright, smooth, and on the lighter side of medium-bodied. The carbonation is sufficient yet not overpowering and the alcohol seems stronger than it really is.

The fresh water that they brag is retrieved just a dozen miles away really does seem to make all the difference. Not very aromatic but very crisp and fresh tasting with hops that are very not overwhelming. Very drinkable

The beer comes in a clear deep amber ruby color with a light two finger head.

The aroma is quite big. There’s some of citrus, grass, floral, pine. A huge hoppy wonderful aroma.

The flavor follows on the citrus, orange, floral. Then there’s a middle of caramel malt. It actually pushes on being an hoppy amber ale. It’s not a heavy sticky sweetness, but candy gentle sweetness.

The end hits you tons of pine, but lots of strong tea, earthy, resiny bitterness.

For me, this is just a wonderful pale ale. It really separates itself with the fruitiness and pine. The sweetness compliments the beer extremely well. It’s a great balance, but tons of hops, and packs lots of flavor for a 5.1% beer. Very impressed with this pale ale and definitely something I’ll be going back to.

Mouthfeel- Light but not too watery. Good amount of carbonation.

Overall- A decent and flavorful ale. Not super exciting but pretty basic. A good hop presence however. On the refrshing side too and easy drinking for a warm day. Also, hats off to Victory for advocating environmental stewardship and protecting waterways on the label on the bottle!

The Pale is dead, long live the Pale!

As the classic taste of pale ale is taking on a renovation, it's shedding much of its malt sweetness in favor of a drier backbone. This happens as hop aroma, flavor and bitterness pulls substantially forward. Maybe they're not "session IPA". Maybe they're the new look of American Pale Ale.

Headwaters Pale Ale pours as any well-conceived one would- its copper and light bronze body shows glimpses of gold about its margins. As a steady stream of bubble race to the surface, a longstanding coat of froth presumes the beer's surface. As it trails with dotted rings, the beer sings the praises of all-things-pale.

Conversely its the graham cracker and caramel that greets the taste buds first. Its leading sweetness trends dry and lightly toasty while the pang of citrus rapidly grows in the middle. As a crescendo of citrus strikes, it immediately develops toward spicy, piney and pleasantly grassy finish with a piquant and resinous bitterness.

Medium-light on the palate, the sweetness lingers with the creaminess of carbonation momentarily. But once the hops resinous character sets in, the sweetness escapes and the hops close the show with its own sense of dryness to match that of minty-warm alcohol.

Echoes of toasted barley malt return as the stronghold of bitterness starts to relinquish. Its refreshing and satisfying taste isn't as IPA-ish as many. Headwaters retains its caramel "Pale" roots but also modernizing them.

The beer poured a pale orange color with a 1-finger white head that lasted about a minute with decent lacing.

Big floral hop aroma along with lots of fruits.

Good citrusy hop flavor - mostly orange, tangerine, and grapefruit. Just enough maltiness for sweetness and balance. Bitterness is at IPA levels, but I liked it.

This is a good tasting beer. Another winner from Victory.

This beer is a clear dark amber in color. A soft and fluffy but dense head about one finger high retains itself moderately well and leaves a little thin lacing spotted down the glass.
The nose was strongly hoppy, more floral than anything but with some resin, complimented by a tangy lemon and citrus peel. There's a bit of dry malt balancing as well.
The taste follows suit. This is a very hop-forward pale that doesn't entirely throw out balance. This is a dry flavor given a lower sweetness and what seems like a dry malt base behind the floral, herbal and lightly citrus notes of the hops.
The mouthfeel is clean and crisp in a medium body. Fuller and more interesting than average, but missing something that would put it up there in my mind.
This is another very nice offering from Victory, who never disappoints.

I've been wanting to give this a try for a while but never got around to it for some reason.
Freshness date printed on bottle: Enjoy by June 23, 2013. Pale gold in color, about what you expect for the style. Nice head almost filled up the rest of the pint glass then shrank down to a thin layer leaving faint lacing. I thought I got more of a citrusy hop smell right when I opened the bottle, but after pouring it into the glass and taking a wiff I'm getting more of an earthy type smell thats hard to put my finger on but not as impressive. Taste is crisp an well balanced and leaves a little bitterness behind. Solid pale ale overall definataly a good example of the syle but nothing new or special here. At 9.99 a six pack there are couple pale ales right in the same price range that I would prefer.

Appearance: Light amber, couldn't tell too much in the bottle

Taste: Light and slightly sweet with a brief hop bite

Overall: Been drinking a lot of pale ales recently and this is the best so far.