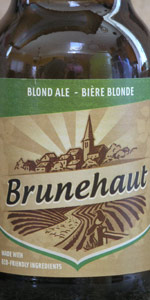 L- Bright gold, almost clear (sediment left in bottle), pours with huge/eager just off-white pillowy head. Forms mega lacing all the way down.
S- Some prominent bright notes but due to winter-congestion I can't positively ID them further.
T- The smell translates into the Taste. I get a sort of bright woody/timber/leathery aspect here plus the dry/CO2 zing on my palate.
F- Huge ongoing CO2 here. The brightness+CO2 manage to almost completely mask the sense of it's 6.5ABV%. It would make a decent all-year beer.
O- It's a pleasant beer but I wouldn't mind getting a bit more evidence of the feel of it's 6.5%, it feels a bit thin to me.
330ml bottle. Now checking the bottle I see it has a WBA2017-Gold logo on it, well I never! I really do not think it's near good enough for a WBA medal. BBE: 09/2022
330ml bottle Bought from BeautifulBeers/BurySt.Edmunds as part of a large pick-your own consignment to London.

Clear golden color with off-white head. Aroma is sweet, malty and grainy with some light yeast esters. Taste follows with the sweet malt and grains, some bread notes, light belgian yeast notes, some earthy bitterness on the finish. Medium body with medium to high carbonation. A decent belgian ale with more focus on the grains.

L: pours a deep and cloudy golden color. Gives a nice top of of head when i pour and leaves big lacings on the sides of the glass.

T&F: Starts of sweet with fruity tones, gets some light malts in the background, gets more notes of spices inn the middle, and it finishes off with a dry sweetness, the aftertaste has a decengt lenght to it . The feel is creamy and smooth with medium carbonation.

O: all inn all i think it,s a farily good,easy driking and enjoyable beer, but nothing overly exiting about it. Lacks that little extra to make it a topshelf beer

Poured from a 12 OZ bottle into a pint glass. The appearance is a cloudy golden yellow with a large thick white head. The aroma is earthy wheat. The flavor is an acidic blend of wheat and possibly hops. An average beer.

A: Golden and hazy with lots of carbonation, 2 fingers of whipped cream, dense, long lasting off- white head.


O: Impressed by all 3 of these Bio’s I’ve had. Thought it wouldn’t be so good so have avoided trying them. Got in Chiang Mai, drank December 17th, 2014.

330ml squat as ever was short bottle. Beyond being organic, this has additionally been 'de-glutenized' - so, much, science!

This beer pours a hazy, medium golden straw colour, with a teeming tower of puffy, loosely foamy, and mostly fizzy off-white head, which leaves a bit of random sudsy sea coral lace around the glass as it quickly and evenly subsides.

The bubbles are certainly active up front, and continue their tight, frothy charade for a good long while, the body an adequate medium weight, and plainly smooth, as yeast, carbonation, and alcohol alike seem to find it acceptable to poke their noses in here. It finishes off-dry, mostly, as the biscuity, grainy malt starts gasping its last, in the face of those folks just mentioned above.

An agreeable sort of BPA, nothing seems lacking after considering the ministrations necessary to qualify it for such hipster and foodie label cred. Anyways, another example of that scary scientific method producing a better outcome (make a normal beer, and then extract what you don't want), rather than starting with an inferior and laughable ingredient list. Worth a go, whatever your dietary concerns may or may not be.

A bright golden brew with little sediment. The aroma is bready, with a bit of sweet Belgian yeast notes. In the taste, banana, clove and bubblegum like yeast notes. There are also doughy malts and a herbal hoppy bitterness. Not cloying, but somewhat sweeter. Light to medium bodied ale with high carbonation. Overall, a clean Belgian blonde, pretty decent.

11.2 ounce bottle poured into a glass.

Taste: Follows the nose, but bolder. Pretty good flavor for such a light colored beer. I like this a lot.

Overall: I think his is a great, under-appreciated BPA. The higher alcohol is masked by the flavors, which I think is a positive attribute. Good stuff - makes me want to check out more of their offerings.

Appearance: This beer poured a two finger head that reduced to a puffy layer. It is a golden straw yellow with good clarity and vision of bubbles coming up through the glass.

Taste: Tastes alright. Bready malts are up front. Yeasty notes and spices are slightly there.

Overall: A decent BPA at best. It be cleaner tasting and less chewy, but still an enjoyable beer.

A: The beer is clear light yellow in color and has a high amount of visible carbonation. It poured with a two finger high bright white head that took a long time to die down, leaving lacing down the sides of the glass and a thin head covering the surface.
S: There are light aromas of musty Belgian yeast and pale malts in the nose, similar to a muted version of Duvel.
T: The taste similar to the smell except that the malts are a little more accentuated and the finish has some hints of spices. There is a very light amount of bitterness.
M: It feels light- to medium-bodied on the palate and has a moderate amount of carbonation. There are some slight hints of dryness.
O: This is a nice an easy to drink beer if you want something that has Belgian yeast but is relatively light in body.

Aroma is all low notes, phenolic camphor and a hint of gun powder, nice in spite of itself.

This is a light, easy drinking beer, but it has an off putting apple note that really ruins this for me. I'll avoid in the future.

The bottle said "Saint-Martin Blond" and nothing matched that exactly on this website so this seemed to be the closest match.

Appearance - Fizzy head that disappeared quickly. Murky yellow/orange hue with floating yeast particles. Picture vomit in a glass and you have what this beer looks like...yuk!

Smell - Some fruitiness noticable and also so straw scents....nothing that stands out though.

Taste - Sorry I don't really care for this beer.
Some spiciness to it which I don't care fore. At least it goes down realitively smooth with little aftertaste.

Mouthfeel - Fizzy like champagne in the mouth. Otherwise nothing impressive at all.

Drinkability - Actually has a tolerable drinkability factor. Fairly light and no bad aftertaste of note. The flavorings just seem off though.

I could drink this if offered but would not seek it out again. I've had several other Belgian Blonde Ales that are much better than this offering.

T: yeasty components shine through with a solid earthy hop characteristics in the middle. strong bread-like sweetness with a residual grape linger + fusel alcohol in the aftertaste. good flavors, just hard to pinpoint it as a belgian pale.

M: bubbly, a little heavy on the carbonation, but just a touch.

D: pretty light and refreshing. good beer, but i feel like it might be mis-labeled as a bel pale.

Thanks to bu11zeye for sharing this bottle.

The bottle gushed for several minutes when the cap was removed. Once it settled down enough to drink, it poured a hazy yellow color with a white head. The aroma is bready malt with some yeast notes. The flavor is bread and some grassy hops. Medium mouthfeel and medium carbonation. Nothing too exciting here.

Slightly hazy, golden-colored beer with straw edges and a decent creamy lace. Fresh and sugary malts, green wood, pith, hay, a touch of spice, pear and alcohol. Crisp and creamy on the palate. Fluffy mouthfeel. Sweet up front with some herbal notes (lavender comes to mind), going dry and with hints of medicinal flavors and apple skins. Mild grassy bite. Fruit (mango) on the breath. Lightly metallic beneath. Even drier. Straw. Then bone dry.

No great shakes here, just a basic Belgian blonde that provides some drinkability, but its flavor is short-lived and border-line bland.

Big psst when the cap came off, a slow gush of foam out of the bottle. Needless to say the head was sizable though the yeast turned this blonde opaque quick. Fruity aroma with suggestions of asian pears and papaya, hint of alcohol and grain as well. Delicate fluffy crispness off of a dry lighter body. Feign of taffy, dry baguette and leafy hop. Fruity and yeasty flavors throughout with a small breath of alcohol. Dry finish.

Aside from the yeast clouding things up this is a tasty little Belgian.

Pours a foggy orange with a big crème head. Nose is very mild. Can barely pull anything off of it. Flavor is smooth. Sweet, yes. Dough tones, sure. A mild earthy character? Yeah. Feel is a bit full on carbonation and the liquid is well bodied. This is an okay pale ale. Nothing shattering or mindblowing, but overall okay.

Brunehaut Blonde from Brasserie De Brunehaut
Beer rating: 80 out of 100 with 72 ratings