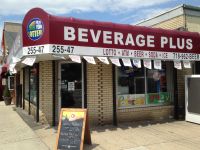 Rated by intobenme from New York

Reviewed by manfromanotherplace from New York

4.39/5  rDev -6.8%
vibe: 4.25 | quality: 4.25 | service: 4.25 | selection: 4.75
if you are looking for craft beer this is the place around queens or nassau county.the craft beer selection is superb and in particular their bourbon barrel aged selection is second to none,and at a good price too.owner is very knowledgeable and has recommended beers to me that turned out to be excellent,definitely worth an extra 15 minutes drive out of my way.this place is top notch.
Jun 08, 2015
Rated: 4.53 by Stableatbest from New York

Q: everything is clean and orderly; every beer has a price sticker; there will be some past-prime items amid some bursting-with-fresh items on the shelves - compared to the rest of the island that I shop, I place them as better than the average. They get in the new stuff, the rare stuff, and the cool stuff and they stock the standard stuff. I'm gonna venture to say you're gonna pay $1 more per item than most stores.

S: owners are very friendly and at least one really knows craft. They offer rare items that are kept off the sales floor to regular customers. Limited stuff is otherwise displayed on the counter and a rack right next to it - usually one bottle/can limits. They don't allow mixing sixers or pulling singles from sixers, but they have a couple of refrigerator doors with craft singles. Beware of some stuff that may be dated - even/especially among the limited items - sometimes they ration things out so methodically that they end up sitting on dated product.

S: up there with the best - a ton of stuff I haven't seen anywhere else, tons of beers I didn't expect see, tons of beers to try. When I say two aisles, I mean two long, leisurely aisles, one opposed by many doors of refrigerated craft. Some cold items are not in the aisle and vice versa, so you have to check both. It's awesome to shop. Worth a trip. I've been shopping the island from here (Floral Park, Queens) all the way out to middle Suffolk, and this is top-tier.

Reviewed by pinyin from New York

4.92/5  rDev +4.5%
vibe: 5 | quality: 4.75 | service: 5 | selection: 5
This is my go to spot in NY. Owner is a very knowledgeable and personable guy, and he will not only teach you about the selections if you are a regular customer, but he gets some surprises in here from time to time as well.

The cashier(s) don't really know much about the craft beer selections, it's best to come when the owner is there.

Prices are fairly good for NY as well. Much cheaper than Syosset Beverage and Whole Foods.

Reviewed by palma from New York

4.91/5  rDev +4.2%
vibe: 4.25 | quality: 5 | service: 5 | selection: 5
I've lived in queens my entire life. Been into craft beer for over a decade. This place is prob the best beer store in Queens AND Nassau. Selection is unparalled, and you'll find some real gems here. Prices clearly marked on every bottle. Owner is a nice guy. Knows his stuff, very helpful. Updates beermenus regularly. This place blows every store in Queens out of the water period. Make a trip here, trust me you wont be dissapointed.
Jan 07, 2015
Rated: 4.46 by Pete_IV from New York

Reviewed by ArsMoriendiOU818 from Virginia

5/5  rDev +6.2%
vibe: 5 | quality: 5 | service: 5 | selection: 5
This distributor has a fantastic selection. The BeerMenus page is ALWAYS kept up to date, so you need not worry about calling ahead. The owner is really nice as well. He took over ownership only a few months ago and if his connections are already this good, I can't wait to see what the future looks like. I'd consider this distributor to be in the top 5 in LI/NYC.
Aug 03, 2014

4.39/5  rDev -6.8%
vibe: 4.25 | quality: 4.25 | service: 4.5 | selection: 4.5
nice little beverage place right off Jericho/Jamaica Tpke in Floral Park..the owner Joy is pretty knowledgeable about craft beers and loves to talk shop w/ his customers...a very good selection of beers not found elsewhere in the area makes this a definite place to stop by if your in the neighborhood
Jul 30, 2014
Rated: 4.25 by sunofneurot from New York