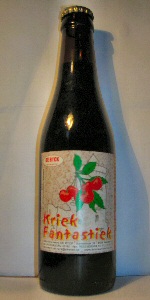 Notes:
View: Beers
Reviews: 3 | Ratings: 4 | Log in to view all ratings and sort
Reviews by nathanmiller:

Sampled in the on-site Old Stables Tasting Room after an interesting tour of the De Ryck Brewery on Saturday 26th March, 2005.

Presentation: Kriek Fantastiek is De Rycks newest offering, jumping on the seemingly unstoppable fruit beer band-wagon. Served in a befitting tall flute glass that has a picture of a brace of cherries with the word Kriek above and De Ryck below. Made with cherry essence, this is more of a fruit beer than your usual run-of-the-mill Kriek offering.

Appearance: A large flamingo pink head sits deep and thick, fluffy and cratered with large bubbles. The main body of the brew is a lightly turbid ruddy dark red. Fine bubbled carbonation throughout with a few streamers.

Nose: Cherry aromas spin from fruity to syrup essence in style, but they always do enough to remind you of the Kriek yet are never overwhelming. In fact the cherry is somewhat restrained.

Taste: Has a sharp start, rather than sweet, more of a fruity berry mix rather than cherry though, probably due to the use of essence rather than whole fruit. Middle is dry too, has a funny taste like chewing a mouthpick but this soon fades to make way for a sweetish finish that is nevertheless sherbet dry at times.

Mouthfeel: Spritzy carbonation supports the fruity berries feel, but it feels thin and rather weak, watery even at times. As with the Rochus, I felt that this suffered from a thin body and a diluted nature.

Drinkability: Finished it, but the fruit berry tastes and crappy mouthfeel soon turned me off this one, but maybe I'm being a little harsh - it wasn't really that bad. The last of the three De Ryck brews  I polished it off just so that I could return for more of the De Ryck Special before we left.

Overall: Not bad, but not really anything that I would go for again, Ill leave this one for the Girlies I think. At least it is not a sickly sweet offering, got to give it some merit for that I suppose.

A clear, burgundy color beer with a creamy head that collapses almost instantly.

Smell is full of cherries with a lot of dark wood, giving the beer a sherry smell. Some caramel malts support the cherry.

Taste is wow! syrupy sweet! A somewhat artificial cherry taste on top of a woody and caramellic malty sweetness. The smell promised a lot, but could be continued in the taste. There is an earthy taste that is coming from the yeast and also some tartness, but that is buried under the sweetness. Mouthfeel is too thick for this beer. Aftertaste is a mix of sweetness, cherries, and end in a lingering dry and caramellic cherry taste.

Kriek Fantastiek from Brouwerij De Ryck
Beer rating: 2.73 out of 5 with 4 ratings