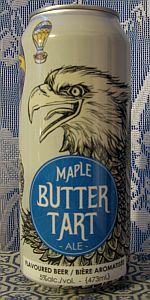 Notes:
View: Beers
Reviews: 8 | Ratings: 15 | Log in to view all ratings and sort
Reviews by BigGruntyThirst:

Great gimick beer. This is from the second release. Chilled can. Sweet! Maple, ya! Just share one unless you are really into butter tarts. Or sugar rushes.

473 mL can from the LCBO; dated Mar 3 2017 and served barely chilled. Every once in a while I come across a beer that is basically impossible to grade to style. I think this one fits into that category - just because the base beer was an altbier doesn't mean it's at all comparable to other alts, of course, but what the hell IS it, exactly? A flavoured amber ale? Or maybe an herbed/spiced beer dealie?

Pours clear copper-amber in colour, with just over an inch of soapy, off white-tinged foam gathering at the surface. Retention is decent; it requires a little more than 5 minutes to settle down to a creamy, dense-looking, long-lasted cap about one cm thick, as a gorgeous, uninterrupted coat of lacing is smeared against the interior of the glass. Looks great to me. On the nose, I am getting notes of maple candy, brown sugar, caramel, vanilla and buttery pastry crust. It doesn't exactly smell authentic (i.e. you can tell they used extracts), but at the same time, I can't really say that it doesn't smell like a butter tart... because it does.

A decent flavoured ale, though said flavour is not as "in my face" as the aroma first suggested. Not that that's necessarily to its detriment - it may actually be for the best, because I was not looking forward to a flavoured extract bomb. Caramel and brown sugar sweetness are a consistent presence through the sip, with subtle hints of toasted malts and nuts just beneath. The maple and vanilla flavours are also fairly prominent at first, but soon weaken as you approach the finish, which has more of a rummy, buttery pastry crust note to it. It's a sweet profile, but not cloyingly so. Light-medium in body, with moderate carbonation levels and a relatively soft, smooth texture. Easy to drink, I suppose, but not something I'd want multiples of.

Final Grade: 3.45, a passable B grade. Maple Butter Tart Ale is one of those ideas that sounds innovative and full of potential when you first read about it - but as is sometimes the case, theory and practice have deviated substantially. There's also barely any hop presence whatsoever, which is too bad because some more substantial hopping might have made the beer seem a bit less one-dimensional than it is. A boring amber-type ale that has been gussied up with some flavouring extracts - it's not bad enough to actively avoid, but it's also not good enough to actively seek out, repeat, or recommend all that strongly.

Amber brownish colour, ring of white head and no lace. Smell is full of vanilla, full on pancake house here, maple syrup, definitely captures the essence of butter tart filling, some sweet confectionary sugar. Taste is sweet, maple candy and vanilla, sugary with an odd out of place bitterness, just becomes way too sweet a quarter of the way through the pint, flavours are incredibly artificial as this becomes the slightest bit warm. High carbonation, prickly light medium body. Unfortunately this is very much just a novelty, not very drinkable.

Seemed sweet at first.. wasn't sure I'd be able to get through the can. Kind of grew on me.. really does taste like a butter tart. Worth trying once (if you like butter tarts)

Amber brown and filtered with no visible carbonation, and a finger of light beige head.

Smells of big maple notes, vanilla, indeed much like a butter tart. A bit of rum as well.

The taste follows the nose, but with much more balance. Not super sweet, but slightly sweet.

Drinking this one at the Lake, Nov 30th, 2017. Excellent brew, if you're going for the flavour it claims.

Appearance - a fine honey brown coloured beer with some faint reddish highlights. A finger and change of off-white head rests on top with a short retention time. minimal rings of lacing stick around the glass. Fairly clear throughout.

Smell - light grainy aromas initially then an overwhelming sweet note that is pastry and butter tart filling. Some brown sugar and while artificial smelling it is nonetheless pleasant.

Taste - initially sweet and caramel like, truly a butter tart. However the taste is thinner than the nose and not as much butter tart flavor, fades into a thin ale. Middling bitterness to close with a hint of sourness.

Mouthfeel - smooth with a medium feel. Initially sticky and cloying but seems thin and lacking substance at the end.

Overall - an interesting concept with a fine butter tart aroma, even if it is somewhat manufactured, it works. The taste however is too thin, the butter tart isn't encapsulated as well. Worth a try as a novelty, but not a great beer, unless you really really like butter tarts.

Is this beer a testament to the art of brewing, wherein the brewmaster, with a refined palate and years of trial and error, skillfully uses the tools available to trick our tastebuds, ( example - yeast Esters kinda mimick bananas, so amp those up and use some wheat and viola - a capable beer as banana bread experiment)

Or is this a base beer with pretty much the same syrup they Flavour your coffee with?

I'll begin by stating I'm typically not a bit fan of sweet things however I believe in trying anything once so here goes.

Look: Pours a dark amber caramel colour with a 1" head that dissipated quickly.
Smell: strong vanilla scent mixed with shortbread cookie cookie
Taste: Notes of butter are certainly there as is the vanilla taste. Very dry and bitter finish which was a pleasant surprise.
Feel: slightly creamy with a light and fine carbonation.

Overall a great beer to try. One thing I'll say is that it did have a bit of an artificial taste that might just be coming from the use of extract.