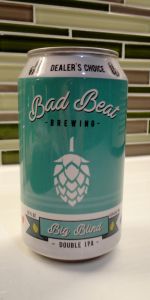 L - Light straw color but opaquely hazy; glows orange when held up to the light. Tall, sticky white head that lasts and creates sheets of lacing.

S - Strong tropical fruit hops with lots of citrus and guava; an odd earthy note is in there too. Biscuity malt in the background.

O - A great DIPA that is on the New England side of the spectrum. Only the slightly odd note in the aroma brings it down a notch for me.

Sep 29, 2018
Rated: 4 by WillieThreebiers from Connecticut

Reviewed by BucannonXC5 from California

Tried this as part of eight tasters on a recent trip to Las Vegas for work and really liked this one. Gave it a 4.25 on Untappd and though the price of $8.99 for a 4-pack (I’m about 90 percent sure that was the price). I was only charged for a $3 taster by mistake. Hoping it will be just as good as it was two nights ago. Can says Vermont Ale, with hops including Mandarina Bavaria, Mosaic, Herkules and Amarillo. I’d only heard of Mosaic and Amarillo.

Did not like this as much as the other night. It’s really reminding me of Pizza Port’s Graveyard. This is still good though, especially for a DIPA. (Overall - 4.00)

Reviewed by MonkeyBread from Nevada