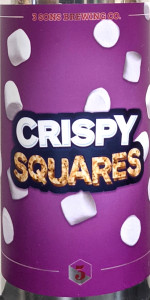 Notes: None
View: More Beers | Place Reviews
Recent ratings and reviews.
3.61 by HopHead_ from Pennsylvania on May 23, 2021

Brew #17 from the Hop Culture Juicy Brews box, a 16oz can poured into nonic.

A: Clear pale straw with a small white head and tons of carbonation bubbles visible in the glass.

T: Yeah, I mean, this is Pastry Lager; the marshmallow and vanilla are there with lots of creamy sweetness, and the lager base is pleasantly blended to lend some snappy character and mild pale malt body. It works pretty well for what it is.

O: It works. It isn't perfect, but its definitely different from a Pastry Stout; there is no roast character (obviously) so the sweetness comes of very crisp and clean. Fun for a one-time try.

I'm honestly shocked this is clear beer. It displays a clear white gold with a moderate but spongy white foam head dying to a spotty film leaving some tiny spots of lace on the glass.

It smells like marshmallow napalm and tastes like lavender and corn PEEPs. Actually, after time, the smell becomes reminiscent of PEEPs too. It's that fake, sugary sweet marshmallow candy character with a metallic astringency.

Taste does actually have a little corn and herb to it, but it's trounced by PEEPs, making it seem like an unnecessarily bitter marshmallow, thus making entirely no sense.

A final hint of shortbread crops up in the medium round body, which has a nice enough feel at first, but fades into an airy, bubbly kind of lacking carbonation before finishing semi-dry.

Not exactly complex, though I'm skeptical it's really aiming all that high. Pour clear pale yellow, maybe a shade or two darker than macro pale. Aroma is sweet marshmallow, maybe a hint of honey and a bit perfumey. Flavor is much more straight forward sweet vanilla marshmallow. A bit reminiscent of Fluff to my New England palate. Pretty firmly bitter and dry, perhaps a touch too much, though probably better to err on that side with a beer like this. Not nearly as offputting as the description suggested, but don't really get why you would bother lagering, the character of the base beer is basically nonexistent and crispy isn't in the top 20 words I'd use to describe it. Wouldn't necessarily recommend, but I doubt I'm the target demographic.

Clear bright gold with a minimal white cap that fades very quickly. Grains and big marshmallow aromas in the nose. Taste follows suit, but has some buttery malt to round out, good balance of bready grains center with sweet edges. Feel has a sweeter complexion obviously, but the yeast texture, the graininess and sneaky sharp hop bitters cut into enough to create a crisp finish. The wife liked it

So. Much. Marshmallow.
Pours a clear straw color with minimal head that quickly dissipates. Aroma is marshmallow. Taste follows the nose and more marshmallow comes through. Mouthfeel is soft- like a marshmallow. One and done, like so many “pastry” beers, but I enjoyed this very much! Thanks 3 Sons and Hop Culture!