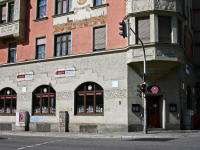 3.96/5  rDev -6.4%
vibe: 3.25 | quality: 3.75 | service: 4 | selection: 4.5
Stopped in here for a quick change of pace in the Summer of 2017.
It looks a lot like a typical American craft beer bar. That isn't shocking since that's what they're going for. Kind of funny to see signs, posters, and stickers for so many American breweries, though. I was shocked to see a lot of Rockyard memorabilia, considering they're somewhat obscure even in Denver.

2 huge coolers full of American craft beers and Belgians of all sorts line the back wall. They even had Westvleteren 12 available, although at 25 Euros they were heavily marked up. Most everything is a little pricey, but their selection is amazing. Some of the US bottle choices erred on the side of "drink fresh" so I'd probably be a little wary of those. Not a lot of Lambic, but they cover just about every other base.

So, this place is great, right? Not quite so fast. It serves a dual purpose. It's a beer bar that specializes in high end foreign beers, but it's also a taproom for Camba Bavaria. They're one of if not THE largest "craft" brewers in Germany. Their offerings dominate Tap-House's beer list, especially the drafts. The trick is, I'm not that impressed by their beers. They range from pretty good to "do they know what an IPA is?" They have 20+ options, but I wasn't happy with anything they had that was hoppy. If you're going there for the Camba drafts, your mileage may vary. If you're going there for Belgian bottles (or American bottles where age doesn't matter), you'll be happy once you get over the slight sticker shock. It isn't everyday that a bar outside of Belgium has nearly all of the Trappist abbey beers next to a bunch of American IPAs.

I'm sure this place is REALLY awesome for people that live in Munich and want to try non-German beers. That's really who it's for. As a tourist, I feel it'll probably be a letdown for most people. If you're really craving Belgians or American beers, a better idea might be to grab some bottles at the (fairly close) Bierothek instead. Either that or head to Giesinger. Who knows, maybe Camba will improve though?

4.06/5  rDev -4%
vibe: 3 | quality: 4 | service: 4.25 | selection: 4.5 | food: 3.75
Located down the street from the Munich East Train Station, Munich Tap-House is a hop haven in the middle of German lager central. They offer several house beers, brewed by Cambra, which are not bad, especially after a week of drinking lagers. They also offer several American drafts along with a long bottle lists. That said, this is a cramped and crowded place with some of the most uncomfortable bar stools my butt has ever met. Had a few, grabbed a bowl of German chili and left. Still, not that bad.
Nov 19, 2017
Rated: 4.06 by zknight from Korea (South)

Got there just as they opened, at 18.00.... easily found right on Rosenheimer Straße just a short bit from the Ostbahnhof.... It's on the ground floor of a massive 5+ story building, with the entrance right at the corner. Upon entering, the place runs verrry long from front to back, parallel to Rosenheimer Straße. A looong bar runs along the left side, with some high tables all along the right side. The place is a bit dimly lit, with an arched, vaulted ceiling and lots of stone and brick. They had a pretty extensive list of biers, from Germany, Belgium, Holland and some from the US. Staff was friendly and pretty knowledgeable. My bier (Störtebeker Starkbier) was solid, though Iain had one that was off, with the staff replacing it and comping him one. Prices were not out of whack, for Munich, all in all. Must return when I don't have The Fest on the agenda so I can give this place it's proper due.... Prosit!!

Reviewed by chicagobeerguy from Illinois

Reviewed by acbarca from Germany

Reviewed by Canada_Dan from Colorado

4.32/5  rDev +2.1%
vibe: 4.25 | quality: 4.25 | service: 4.5 | selection: 4.25
Great spot to have some non-German style beers in Munich. A great selection of local stuff, Belgians, US craft etc. Enjoyed trying some of the CAMBA beers although I was rather underwhelmed with most of them. Staff was super friendly offering numerous recommendations and samples. Definitely worth checking out as a break from the bier gartens
Aug 10, 2015
Rated: 4.24 by HookemHoos from Virginia

Reviewed by boddhitree from Germany

4.48/5  rDev +5.9%
vibe: 4.5 | quality: 4.75 | service: 4 | selection: 5 | food: 3.5
Camba Bavaria's craft beer bar, Tap House. We went by subway and it was a 10+ minute walk, much farther than it looked on the map, but we found it eventually. The place was packed, and we at first could't find a table, but after walking around for 5 minutes, we managed to find 2 empty bar stools at a table with others. The food was good, first of all, for we were famished. The menu was small, mostly some bread with stuff of it, and chilli con carne, but it tasted great. The beer menu of the day, and this only one of many ways the place the place made me feel at home. The atmosphere was lots of open brick and wood, not stereotypically German, but more post-modern factory.

The menu that made me swoon. There had to be 200 or more beers, lots of beers on tap that changed daily, and lots of bottles that came in seemly every day, for they announced new arrivals on boards.

We had two beers while there, almost the antithesis of each other, the first from a bottle, and the 2nd one in a 0.1L glass. I had a Sly Fox 113 IPA and then I had the Camba Bavaria Camba Doppelbock - Bourbon.

First, the 113 IPA was almost too bitter to drink, especially in the front of the tongue and in the aftertaste. It was REALLY BITTER, and this covered up whatever malt and other flavours may have been present in the beer. As an ending beer, it was most unpleasant. I wish I had't ordered it and it basically made me think of Scott and his ravings against the MOAH-crowd. If this is what it leads too, I'm with him. It almost reined in any fun I'd been having. 113 was the IBUs and it was not a beer to end a night on.

The other beer, the Camba Doppelbock - Bourbon was heavenly. The aroma... WOW... vanilla, chico, bourbon, man. The flavour lived up to it's introduction, again WOW! All the above aromas were present in to taste, but mostly it had a whisky-ish taste, too. At 10.5%, another beer maybe that wasn't the best to end a day of drinking, for it was too strong and powerful to finish either, but that was because I was beginning to be more than tipsy getting at least half way finished with it. At 10.5%, I'd call that a Trippelbock. However, it tasted wonderful and was worth every penny of almost 5€.

Reviewed by innominat from Ireland

4/5  rDev -5.4%
vibe: 4 | quality: 4 | service: 4 | selection: 4 | food: 4
This was a highlight of my trip to Munich. I visited on 2 occasions both where very enjoyable.
the food I tried was great, I had a great bowl of chilli for less than 5 euro. 200 beers including many German craft beers including a lot from Camba who I believe own the bar. 40 beers on tap most at a very reasonable price. The only really craft bar in Munich. Highly recommended.
Jun 12, 2014
Tap-House Munich in München, Germany
Place rating: 4.23 out of 5 with 15 ratings