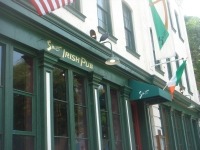 View: Place Reviews
Reviews: 7 | Ratings: 15 | Log in to view all ratings and sort

A: Sine is your standard Americanized Irish Pub. For the most part, the atmosphere feels fake and forced in my opinion. There was a “Roots Rock” acoustic jam band playing the night we stopped in. The place is quite large with ample amounts of seating both indoors and outdoors. Despite the ample amount of seating, the place was quite crowded.

Q: The beers were of decent quality but the temperature was inconsistent. Not sure if it was from the beers sitting on the end of the bar waiting to be taken to our table or that is how it came from the tap.

Ser: Our waitress was really pleasant and attentive but she seemed a little swamped (did not seem like there were enough waitresses/Waiters) working that evening. Despite being swamped she was always pleasant with no attitude.

Overall: This certainly is not a beer bar in my opinion. You would never go here for craft beer. The score I am giving this place is based on it being a beer bar. It is not really terrible place, just not a great place for craft beer.

Sine is an extremely popular bar in Richmond. However, this is FAR from a beer bar. They do have a surprising amount of taps 25, unfortunately if you get there later than 9 nobody will be drinking them.

Atmosphere - The atmosphere of Sine is one of an older crowded frat party. Most nights of the week, the typical crowd will be 25-35 year olds looking to meet that special someone. NOBODY comes here trying to drink GOOD beer. The place is very big and does have some nice outdoor seating area. Drink before 9 pm to avoid the non BA clientel.

Quality - The quality of their products is average. When they are really busy you will occasionally get a warmish beer. But other than that, nothing stands out.

Service - The bartenders and wait staff are friendly, but because this isn't a place people go to drink real beer, the bartenders and wait staff don't really know anything about good beer. The service is never that fast, and on busy nights, getting the barkeeps attention is only possible if you are a hot blonde. Weeknight dinners are usually ideal for quality of service.

Selection - They have a surprising number of taps - 25. With a good mix of international and domestic. Unfortunately, the last time I was there they were out of the one beer that I really wanted, so I settled for a $3 Newcastle at happy hour. They have all standard macro-brews, and many common international beers. The have the one Richmond Beer Legend, but that's to be expected. But besides that they really only have one or two other craft beers. For a place that calls itself a pub, I expect a few more local or craft beers.

Food - The food is average at best. They recently changed the menu, and I think they simplified it. The burgers and sandwiches are ok, and nothing really stands out. A lot of people like to buy into the pseudo-irish atmosphere and get "irish nachos" (basically potatoes) and things of that type.

Value - The prices are fairly standard, $8-10 burger/sandwiches. Not excellent, but a decent meal for the price.

Overall - Overall, Sine is a place to go to party, not a place to go grab a pint. If you are looking for a drunken bar scene that masquerades as a pub, this is the place. I'll say this though, every year, Sine throws the best Saint Patrick's Day party. But if it isn't March 17th, and you want to get a REAL beer, then there are better places to go in Richmond.

The first time I walked past Sine' Irish Pub and Restaurant it looked like a true Irish Pud from the outside with Irish music playing over a speaker. When I went in there was a Celtic band playing which added to the Irish atmosphere. The place was overly crowded and It was difficult to move around. The food was not very good and typical of the commercial type places, i.e., Applebees, Ruby Tuesday, etc,. I have been there several times after that but never to eat. The atmosphere is dingy. The beer selection is nothing special. They have the typical bottled beers like Lite this and Lite that, etc,. Their tap selection wasn't that bad, 26 in all, Blue Moon, Harp, Bodington's Pub Ale, Legends Brown Ale, Murphy's Irish Stout, Guiness Stout, St. Georges Pilsner, Jefferson Resrve Bourbon Stout, just to name a few. I preferred what they have on tap than what is in the bottle.

Ive been here twice, once for dinner and once for bar/ dancing. The menu has a great selection of irish beer, some at the time i had never heard of. The overall selection isnt stellar but i would say it is better than average. This bar has a back patio, which is where i ate dinner. It was a nice atmosphere and the food was very good, though a bit pricey. When i came for the bar/ dancing experience it was mostly tap beers, that i got and i enjoyed them. They also had a live band and an area relatively sized to dance. Its a fun change of pace place.

The Sine' Irish Pub at 1327 E. Cary street is pretty much your basic American "Irish" pub with the regular line-up of beers and a few extra locals thrown in. The name, Sine', means "This is it", but it's really not. On an average day it's a decent place for a pint and some grub, but on weekends it's a loud, noisy and crowded place to be. They have good music, but it's otherwise unworth the hassle for the minimal return. I can find some good music almost anywhere... the college crowd here detracts, and the minor boost in beer quality just doesn't make up for it.

As my girlfriend and I walked around Shockoe Slip, we decided to stop for a drink. I was hoping for more brews on tap, and more craft brews, but it has your usal suspects on tap and in bottles for an Irish pub: Killians, Guinness, Harp, John Courage, etc. A nice selection of whiskey too if you're into that.

It was empty when we went, but I really like the nice wood furnished bar, all the wood interior, and there's an outside patio and a deck. So there's lots of room, and it was all pretty nice looking. I can imagine a weekend night when it could be pretty crazy and probably a great time.

We only got a beer each, but we were on the patio. And our server was very nice and didn't mind that we were only there for a beer (not that he should've, but you know how some places can be at around 4:00). And we didn't try the food either, but the menu looked good.

For the patio and outside setting with some friends, this would be a cool place to check out. However, with Richbrau, Legend, and the Capital Ale House just minutes away, if you're into the craft brews you should go there. So yeah, I wouldn't seek this place out again, but I'd go again if it came to that.

Nestled in the heart of the Shockoe Slip, this Irish pub has a lot to offer. What better way to start off than with the first item on their appetizer menu: "Full pint of Irish Guiness." Well, if I *have* to....

Other items on the menu give an Irish flavor to your experience: Irish nachos, shepherd's pie, Irish lamb stew, Dublin Bay seafood casserole, and beef & Guiness stew. Lots of other "non-Irish" items as well for those of you wanting more traditional bar food.

Atmosphere is quaint. Having never been to an authentic Irish (as in located in Ireland) pub, I can't compare, but I like Sine'. The pub has a lot of appropriate decorations (pictures, whiskey barrels, beer bottles, etc.) that add to the charm (or tackiness, depending on your point of view).

They had a fairly decent selection of bottled and tap beers. Unfortunately, out of the 4 times I've been there, only once have I had a waitress/waiter that knew much about beers.

Their tap beers today were:

Bottled beers were OK, certainly not close to the selection of tap beers. Lots and lots and LOTS of Irish whiskey to try as well.

The food is well above-average. Every meal I've had has been excellent.

Overall, not a bad place to go for lunch or a light dinner with some beer. Now that I've found the Capitol Ale House, I'm a little biased. But the food is good and the beer, while not stellar, certainly makes the experience enjoyable.