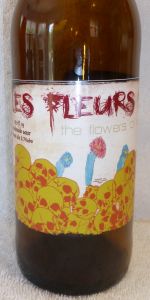 Reviewed by Stevem68 from Ohio

The smell is full of witbier sweetness with a clear punch of sour that mellows the alcohol undertones.

The taste fulfills the scent. The low carbonation gives the beer a fuller almost velvety feel that gently unravels as the acidity comes on stage and takes the spot light. It's almost reminiscent of lemonade.

This beer was definitely brewed to be different and it doesn't try to be something it's not. I wouldn't seek out during a witbier craving but at the same time I would love to run into it again.

Reviewed by XicanoBeerRun from Texas

Reviewed by Getalegup from Texas

Served cold into a pilsner glass at low altitude in Austin, TX. Reviewed live as a sour wheat ale per the label. Expectations are above average given the brewery.

HEAD: It doesn't quite form a complete head, but one side of the glass has a very thin 1/8th of a finger wide floating bubble amalgam that sits for about 40 seconds before receding, leaving no lacing. I can't say the head is horribly impressive.

BODY: Cloudy yellow of average vibrance. Translucent and semitransparent. I think I do notice some yeast particulate about the bottom of the glass. It's by no means a clean appearance, but it's apt for a sour and looks more lively than most beers - and certainly less filtered.

Overall, it's a good appearance for a sour wheat ale, and its hefeweizen origin is evident. While it's not unique or special per se, I'm certainly looking forward to trying it.

AROMA: Hmm. It's quite off-putting, with a urinal cake-redolent aroma of artificial lemon and detergent. Some tartness and citrusy twang is evident, but it's a bit lacking in terms of perceptible sourness and even fresh wheat. Really quite horrid.

TASTE: The taste too suffers from that off-putting urinal cake off-character alongside unwelcome soapiness and artificial lemon. Lemongrass and wheat get buried beneath the off-notes, but the tartness I guess is nice. I wouldn't call it sour by any stretch.

It's quite poorly built and balanced, with no saving grace. Average depth, duration, and intensity of flavour. Lacks complexity and subtlety; it's a loud in-your-face flavour profile.

TEXTURE: Undercarbonated, nicely smacky on the palate, unrefreshing, smooth, and wet. Not the fresh acidic mouthfeel I hoped for. Passable at best.

OVERALL: A swing a miss from New Braunfels, Les Fleurs Du Mal should never have even made it to market. I'm a huge fan of sour beers, but this is quite poorly executed. I like the premise; building a sour using a hefeweizen base and lemongrass is a good idea, but what happened? It ultimately comes off tasting like a novice homebrewer's first stab at a Berliner weisse and its many off notes make it difficult to drink.