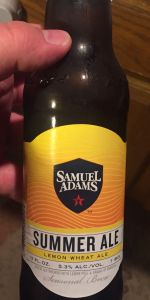 Notes: An American Wheat, brewed with malted wheat, lemon zest and grains of paradise - a rare pepper from Africa first used as a brewing spice in the 13th Century to create a crisp and spicy flavor and body.
View: More Beers | Place Reviews
Recent ratings and reviews. | Log in to view more ratings + sorting options.
Rated: 2.75 by bkwagie

On arrival a one finger fine head that dissipated to a decent covering pretty quickly. Body is a hazy golden yellow with fine but active carbonation. No lacing on this one.

Aroma is intensely lemony with a nice hit of wheat on the back.nowhere near a hefeweizen, but this is an "American wheat beer" so it's pretty good. Clean lemony wheat ale.

Taste follows the aroma but it is quite balanced and all the lemon flavor tastes gery natural like lemon juice. Behind that is a solid wheat malty backbone with just a hind of bitterness on the very back. The bitterness could be lemon zest or hops it's hard to tell but maybe they are working together.

The feel has an intense carbonation bite that is quickly followed by a soft and pleasant head. This is a pretty dry beer in terms of mouth feel, but the finish is medium long and quite smooth.

Overall this is a surprisingly nice wheat beer with lemon additions. The grains of paradise aren't particularly noticable but I have a hard time picking up coriander in belgian brews so maybe this is similar. Overall this is a nice summery lemony wheat beer that is nicely balanced in the malt to lemon rind, but hops are hard to specifically pick up.

Reviewed by WYeates from North Carolina

4.1/5  rDev +22.8%
look: 3.5 | smell: 3.5 | taste: 4.5 | feel: 4.5 | overall: 4
Nucleated Pilsner
Look: Slightly hazy yellow-gold pouring a 1.5 finger head which dissipated into a thin cap
Smell: Lemon and orange zest and lemon juice. Doughy wheat malt, and a hint of hops
Taste: Lime zest, lemon zest and wheat. Small amount of hops lingers in there. Tiny pinch of baking spice. Little to no perceivable bitterness.
Feel: Moderate carbonation and light body. Crisp and refreshing.
Overall: This is the beer that got me onto wheat beers and remains as one of my favorite beers. Really refreshing beer for hot days.

Reviewed by KingLemuel from Washington

2.28/5  rDev -31.7%
look: 2.5 | smell: 2 | taste: 2 | feel: 3 | overall: 2.75
I had high hopes, but the beer is at best lack luster. I'm a home brewer and I recently tried, and liked, Blue Moon Belgian White. I made up a recipe to brew a wheat beer, inspired by Blue Moon Belgian White. So, I thought I would try other brands to see if they were less, equal, or better than the Blue Moon. The Samuel Adams beer is just OK, not close to being equal to the Blue Moon. As I type this, I am drinking a single 12 oz bottle of Shock Top Belgian White (bought to do side by side with Samuel Adams Summer Ale) and it could be a kissin' cousin to Samuel Adams Summer Ale. I do not think I could tell them apart in a blind test. I will not be buying either of these again, and will go with the light, tasty, and very refreshing Blue Moon Belgian White. Both of these beers command a premium as compared to Bud, Coors, Tecate, etc, but they don't deliver on the taste, so, why bother and pay more? They all are, after all, just beer, and are very drinkable. My first impression, when I drank the Samuel Adams Summer Ale was, "I'm glad I only bought the six pack of bottles and not paid twice as much for the 12 pack!"
Jun 04, 2022
Rated: 3.34 by Beer_Goblin from New York

Reviewed by ANIMOUL from Vermont

3.59/5  rDev +7.5%
look: 3 | smell: 3.25 | taste: 4 | feel: 3.25 | overall: 3.5
Slight lemon zest smell mixed with some light malt. You can taste the typical wheat beer flavor on the front but then there is this strange lemony, sour, citrus finish. I make it sound bad- it’s not bad. It’s actually very refreshing on a hot day like it was today. The grains of paradise make a decent showing in this beer and add a nice depth to it overall. I will probably be buying some more before the season ends. At 5.3% ABV, it’s easy to enjoy a few of these while grilling or sitting outside with friends. It’s not my usual choice of beer, but I was pleasantly surprised. Try a 6-pack if you haven’t already.
May 23, 2022

3.88/5  rDev +16.2%
look: 4 | smell: 3.5 | taste: 4 | feel: 4 | overall: 4
Look...Pale brown with some haze
Smell...citrus wheat hint of honey, hops
Taste...juice bitter explosion into a pilsener not too bitter drying finish. A beer i wish i woulda found earlier in the year.
Feel...Prickly heff carbonation off of the wheat. small amount of lacing but still present. Perfect beer with food
Overall... I am always reticent to try new beers from the Boston Beer Company as I have not bought one in 20 years? Yikes it probably has been that long!!! And this beer was given to by a friend so i will maybe have to take off the 20 year hiatus off the Sam Adams, Anyway this beer is very nice example of heff pilsener mix.

3.5/5  rDev +4.8%
look: 3.5 | smell: 3.5 | taste: 3.5 | feel: 3.5 | overall: 3.5
12 oz. bottle poured into Imperial pint glass.
Look: Cloudy straw color, 1 finger creamy head, nice carbonation, some lacing
Smell: Malty, citrus is there but not overpowering
Taste: Medium bitterness, some hop flavor with a dry citrus finish
Feel: Good carbonation, medium body, coats the tongue well
Overall: Hits all the right notes for the style. While not necessary this would be good with a splash of lemon juice or a lemon wedge.
Pair with lighter foods, such as salads, sushi and vegetable dishes.