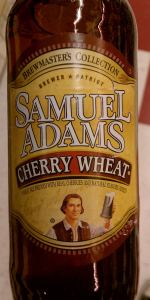 Not terrible, but a little cough-syrupy.
Mouth feel a little watery and soda-y, which is probably the biggest turn off.
I'm not crazy about this one, although I like the idea of a cherry beer. Just don't like the way this one executed.
Never poured it. Wonder if I'd like the color. (Picked a random rating, as the site wouldn't let me skip it.

I'm being a bit generous, this is one of the worst beers I've ever tasted. At first I thought someone slipped half a bottle of cough syrup in my wheat beer.

I generally consider Sam Adams to be a good (not great), quality brewer. And while I was at first reluctant to give them a try, I have found many "fruity" beers that I find quite enjoyable. But Sam's Cherry Wheat was a major disappointment. The dominant, overpowering flavor was, to me, far too reminiscent of cherry cough syrup. And not in a good way. As cough syrup, a cherry cough syrup flavor is fine. Mixed with beer, not so much. A rare beer that to me was undrinkable. I tried one from a six-pack, didn't finish it, and gave the remaining five away.

This was a beer that I believe I first had back in the late 90s, and it was the first to make me realize that a beer can have an accented flavor. Bass had been my beer at the time, but I also liked the occasional Samuel Adams. The one thing about the beer that I love is its cherry aroma. The taste is solid but nothing special, and the feel is average at best. Still, I do like this beer.
This is the first time I've had this beer in some time, and it's a definite guilty pleasure.
It's basically as close as you can get to straddling a beer and a soda, yet it works for me.

Part of me is relieved Sam Adams Cherry Wheat doesn't have a spot of red - fruit beers that take on too much of the colour of their fruits tend to be contrived and superficial. That said, this dull, semi-clouded, honey golden appearance doesn't exactly excite the senses. And the lack of head is concerning, especially for something with "wheat" in the name.

Fruit can be frustrating to brew with; because it's comprised mainly of water and sugar, it's difficult to preserve those fresh, sweet flavours post-fermentation. It requires huge amounts (which, on a scale like that of Boston Beer Co., means a lot of money). Hence, a lot of producers (this one included) opt to supplement natural fruit with "natural flavors".

It's obvious. The aroma resembles that of a maraschino cherry jar. It's not even fruit juice - it's maraschino cherry juice. It smells preserved, sweetened, syrupy, even a little briny and has a bright, almost grenadine-like red fruit flavour that is more at home in a Shirley Temple than an American Wheat Ale. There's a hint of blanched almonds and powdered sugar too.

The flavour is equally shallow, offering only the most superficial fruit flavour, something resembling a cough lozenge or bar mix. Although tart cherries are cited on the label, the use of honey turns things quite sweet. The other components of the beer (yeast, malt, hops) contribute virtually nothing. After a short burst of carbonation there's little left but a stale, damp grain taste.

I last reviewed Sam Adams Cherry Wheat ten years ago. It is remarkable the similarity in my tasting notes and overall impressions. I'll give the brewery full credit for consistency though, as you can see, I'm not willing to grant points for much else. It may lack the eye-catching appearance but, make no mistake, this one of those purely cosmetic fruit beers.

Biscuity grain, grassiness, and a strong backbone of sweet, cocktail cherries. Yeast. It has character.

Flavor: mild; round grain; a hint of sour dough; a hint of the cherries discovered in the aroma, but not as pronounced.

Overall: this is one of the exemplary flavored beers on the market today. I find this beer to be adequately flavored but not overly sweet nor does it suffer the detriment of coming across as artificial and disingenuous. This is a fine beer, I will certainly buy it again, and I highly suggest it to anyone who likes flavored beer.

I love wheat beers but really not a fan of fruit beers. But this beer is one of my favorite summer beers. A nice sit in a lounge chair in the summer beer.

Cherry in front. Cherry pie cherries and light beer background. I happen to like fruit beer because the summer beers are too light and empty in flavor so if it's summer I would go for this. Look- Nothing impressive in its pale wheat beer appearance nothing to think the cherry is real. Smell- Cherry pie filling, nothing else. Taste-dry cherry pie feeling on a light beer paddleboard. Feel-dry mouth, cherry beverage like sweetened cherries. Overall cherry is my go to fruit beer thus my higher rating but I always rate cherry beers to Founders Cerise and this one falls short. I also rate these beers on price to yum scale and this one is not as good to me in the fruit beer column as Oberon, Upland Wheat, or #9 pale or Curious Traveler Lemon Shandy in that grouping or the summer easy to find locally group. But would rate above purple haze or Leinenkugel's Summer Shandy. Also I am not a fan of orange, apple or raspberry fruit beers.

Had in a bottle long before I was "into" craft beer. Had it again on tap once I entered the craft realm. Pours a wheaty, sunburst orange color, considerably hazy and basically perfectly opaque in the mid-section of the brew. Slightly off-white head is sparkly and foamy and recedes relatively quick leaving some mild lacing behind. The aroma is cherry. That's it. That's all. Just cherries. I mean, I could sit here and tell you "it has some wheat in the background", because it does, but you have to search so hard for it beneath the cherry blanket that by that point it isn't worth it anymore. The cherries smell sweet, tart, and actually a little medicinally cloying. Weird combination, right? I can't decide if this aroma is good or bad - but the fact that I must ask myself that question tells me it's probably the latter.

It hits my palate, medium bodied and heavily carbonated. And that's where shit hits the fan. WOW, the cherry presence is not only overwhelming, but it's basically the only thing you can taste. And as mentioned for the aroma, it's not a very "good" cherry perspective. Hints of the profile taste natural and real - some tartness and sweetness that couldn't be mistaken for anything but fresh cherries. However, it's like the brewers decided that it wasn't enough, and they took it a step further and added a butt-load of extra, artificial cherry flavor to push the flavor envelope of the max. Chalky, medicinal, vitamin-like. It's like, tart cherry cough syrup. Or a sweeter version of a cherry flavored Flintstones vitamin. Aftertaste has a slaughtered wheat profile, still majorly enveloped by the cherry onslaught.

Buuuh. Save yourself the trouble with this one. The cherry is just way too overdone and overpowering, nearly to the point of being undrinkable. And it's not the "fruit-lambic" kind of cherry. It's more of a "take your medicine" kind of cherry. Definitely not for me.

Hazy gold with a decent head that retains a very nice lace. Cherry aroma hits immediatly. Crisp and dry with some cherry flavor and bitterness. Very refreshing but not what to get when looking for a beer. Good for a change of pace during the dog days of summer.

A - A hard pour gets me three fingers of hae that shrinks to a moderate layer. Some lacing is left on sides of the glass.

S - Even if you didn't know what was in the glass, the cherry smell gives it away. But it is also very sweet smelling. Reminds me of maraschino cherries in a jar.

T - Again the maraschino cherry image comes up again. I can't really taste any "beer" just the cherries. I am starting to think "soda" more then "beer".

M - The sweetness comes off sticky. It coats the mouth and throat. This stickiness overpowers even the carbonation.

D - If you like sweet fruity drinks, then this beer is for you. But one is all I can try. It is too sweet for me.

Pours a nice light copper color with a fluffy, cream colored head. The head slowly subsides leaving behind a fair amount of lacing. Upon raising the glass to my nose one thing stands out, and that is Cherry, almost an artificial cherry like smell, but still anchored on the side of real. Smell of wheat barely sneaks in behind the cherry, but it's definitely there.

Drinking the beer after smelling is definitely a let down. In the nose there was nothing but cherry, now on tasting it's mostly your standard American Wheat Ale with a tiny bit of hop bitterness mixing with the cherries, and finishing with a slightly bitter cherry aftertaste. While the cherry may not carry through as advertised, it is a very drinkable beer, just a let down on the promise of cherry and wheat.

Poured into a pint glass. The beer is golden with a hint of red. Had a nice head that did not last. It was clear with good carbonation.

The smell was completely dominated by the cherries. It was difficult to smell much else besides that.

The taste was also dominated by the cherry. It was too sweet in my opinion and almost drank more like a soda than a beer.

It was not horrible because it is clearly a cherry wheat beer, but I think it was a little too much on the cherries in both the smell and taste.

Had this on tap at the Newark airport, waiting for my flight back to Toronto. I knew this didn't have the best ratings, but the other selections were a couple other Sam Adams, plus typical macro lagers. Pours a pinkish-orange colour with thin white head. Smells of very sweet artificial cherry, similar to cherry candy. Some faint wheat aroma is there too. Quite a sweet flavour. Medium body carbonation. Easy to drink beer, just too sweet to have more than one in a row.