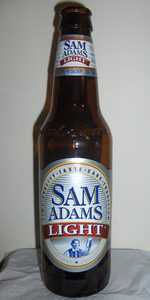 My curiosity is piqued in that of the Top 50 Light Lagers on this site, I have reviewed 35 of them, to date. What makes this one so glaring is that it is # 6 & with this review, I will have reviewed the top 21 & I am now looking for Michelob Ultra Amber to complete the top 33! The reason for their absences is that they are in bottle format only & it is only my eradication of the Chez Woody Bottle Backlog that has gotten me to this one. Onward!

From the bottle: "Before introducing a light beer, we spent 2 years and brewed 23 different recipes. This drive for flavor perfection means we poured more than 7,000 gallons of pretty good beer down the drain. One happy visitor to our brewery asked if he could apply for a job as 'the drain'. Cheers! [undersigned] Jim Koch".

Ha ha! I have never gone on the tour, but clearly, that is a man after my own heart. I will have to satiate myself by
Pop!ping the cap and drinking the contents of the bottle. Speaking of which, is it possible to "dump" as opposed to "pour" the contents of a bottle into a glass? I tried, anyway. To say that the foam came angrily roaring up would be to understate the case! Two-plus fingers of fizzy, foamy, rocky, tawny appeared for my perusal & then subsequently faded into memory. Color was Amber to Deep Amber/Light Copper (SRM = > 9, < 13) with NE-quality clarity. The toasty, biscuit malts were prevalent on the nose and this did not seem like any of the other Top 10 Light Lagers from previous reviews. This actually smelled palatable! Mouthfeel was, well ,,, light. I guess that sacrifices needed to be made somewhere. The taste was kind of sugary, vaguely reminiscent of maple syrup, but still quite tasty as opposed to others of its ilk. Finish was semi-sweet, which was also unexpected, given its initial flavors. I know that my numbers are going to be high on this one, but it is supposed to be to style, not to personal taste.

This is why Sam Adams is the founder of craft beer only he could make a light beer worth drinking. Forget the rest this is the best light beer out there.

By far the best light beer I've ever had. I knew I could count on Sam Adams to succeed in making a light beer that has all the full flavor of a normal brew.

As far as "light" beers go, this one is pretty decent. Comes off as a lighter boston lager in the appearance department. Amber in color, lighter, 1/2" white head. Nice retention for style. Aroma has well, nothing really going on.

Taste, yeah, I mean, there is discernable hops and malt here. Its light, but that is exactly what they were going for. A lighter bodied Boston Lager, delivers for what it is. Not my cup of tea, but I know plenty of people I would serve this to.

appearance: This beer actually has some color to it. A very light amber coloration distinguishes itself from its other light brethen, with no real head forming in my glass. Might had been my extra careful pour. Overall not bad. 4\5

aroma: Their really isn't anything here that I like. It really just smells like your typical light lagger, with maybe some kind of odd hoping, but I cant place it. Even so, I really don't care for it. I was kinda hoping for a nice load of hop aroma. 1.5\5

taste: moment of truth...and...you know what, its really not that bad at all! Extremely neutral, light, with few flavors backing it up. Very grainy malt body dominates the flavor. The Trader Joes pilsner had far more hop characters to it, but then again, this is a light beer. Its not suppose to have a lot of hop character. Compared to Bud light, or platinum, seriously, I give this one a 4\5

mouthfeel: light with a heavy dose of carbonation, making it very spritzy and covering its very light body. 4\5

overall: This beer really was not made for me, but I'll be honest, I don't hate it. Id be happy drinking it for free at a friends house or at a party. Its easy to consume, and is not offensive at the least, and does count as a light lagger. That's impressive, as to make a light lagger inoffensive is damn hard. After drinking the entire glass, my final rating is... a 3.75\5.

Its not bad at all. I cant say that I like its aftertaste very much at all, but overall, the beer really is ok...especially for anyone who wants to indulge the fantasy of a “diet beer”.

Crystal clear copper hue, covered by a fluffy two fingered ivory white head that manages lace. Much more enticing in appearance versus the typical insipid light. Light caramel sweetness and a hint of toasty malt in aroma, along with a very mild floral hop nose. Bland, but above average characterwise aromawise for a light. Unfortunately, flavorwise this brew falls prey to the typical dearth in flavor of a typical light, and is both thin in body and malt character. Sweetness is caramel malt derived, and hints of dry, toasty malt provide character a bit above the norm for a light. Hop bitterness is above the norm and provides a crisp, quenching feel. Paltry Mittelfruh hop flavor eeks its way in, but isn't assertive enough to prevent overall blandness. Very well attenuated and dry overall, w/ a slightly watery mouthfeel. Finishes dry, w/ trace biscuity malt briefly lingering. SA Light tastes like a Boston Lager diluted with Seltzer water. Although perhaps the most flavorful light I've tasted, it's still very much a lackluster beer.

Pours a rusty bronze color with almost no head and very little visible carbonation. Compared to its light lager peers, this beer has plenty more color and potential. Although faint in the nose, I notice some good malt scents, but not much more. For being a light beer, it really does taste pretty darned good. It has an initial sweet hop flavor and washes away very cleanly. Quite refreshing, and I must admit one of the best tasting light beers I've had in a long time. The mouthfeel is good, I think I'm detecting more carbonation from my palate than I do my eyes. Overall, this is a good beer, and an outstanding light beer.

tastes really malty has a dark color for light beer and i really wouldnt want to sit down and just drink one for the taste. my second to least favorite sam adams style. good for a light beer but if you want a good sam adams go elsewhere but an above average light beer thats for sure.

As light beers go, this is a pretty good beer. Pours a deep golden color with a minimal head. Aroma is mostly malt with a slight metallic tinge. Not aggressively carbonated. Taste is smooth, crisp, malty with a hint of hoppiness. I don't normally buy light beers, but on a hot, humid day, this beer does indeed hit the spot. Heads and tails above the macro lights.

Freshness date of July, bought in August. Too bad I didn't realize this until I was at home.

Head was a nice white, but it faded down quickly. The color of this beer does not look like any light beers I have seen. It is almost an amber colored orange (if that makes any sense). The balance between hops and malts is very good. The mouthfeel is wonderful, as I just want to let it linger in my mouth for a while before drinking it. Very clean and refreshing.

This is definitely the best light beer that I have had and it really packs a lot of flavor. If the label didn't say it was light, then I would have never guessed it to be a light beer.

pours out a very clear light amber, deep golden color, about 1-2 finger fizzy white head off the pour that faded to nothing within a minute. lots of big carbonation bubbles rushing to the top. a deeper color than most light beers, but the total lack of head is a little disappointing.

very light and watery, and perhaps a bit over carbonated, but crisp, refreshing, and very easy drinking.

better than most light lagers, but thats not saying much.

My first taste of this light was disapointing. As this brew warmed in my glass the flavors came out and I was quite impressed. This is what a light beer should taste like. Just the copper color of this light beer is enough to try it. This isn't your nascar swilling light. A definite brew for that summer bbq or tailgate.