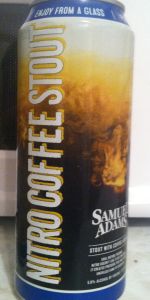 bought a 4 pack just this morn - enjoying after prayers as a nightcap:

a what a show! on the pour - best pour ive seen yet. after the lengthy settle - just ONE finger of SUPER THICK, Khaki head on top of a DEEP brown brew that wont show even a glimmer when held against a light.

s sweet maltiness dominates, I get chocolate more than coffee in the background

t this head is thick as whipped cream, (and as sweet too!) this is good - super rich desert style brew.

d this is to be sipped 4 sure. REALLY SPECIALLY GOOD

Very nice taste and feel. Coffee and dark chocolate are most noticeable. Nitrogen didn't have the cascading effect that a other nitrogen beers I've had did. Not sure if the widget didn't work or what. Overall a tasty brew. Would buy. This one was a trade with my brother.

$ 9.79/four pack of 16 ozers ($ 0.153/oz) at Spec’s, San Antonio, TX
Can dated Jul 2016 at 50 degrees into hand washed and dried shaker
Aroma – coffee and roasted malt, weakens throughout consumption but remains until the end
Head small (One cm, semi-aggressive pour), light brown, creamy, lasts
Lacing excellent – sleeve of tiny bubbles covers the inside of the glass
Body dark brown/black, opaque
Flavor – well balanced coffee and roasted malt, neither is overpowering; no hops, no alcohol, no diacetyl
Palate moderate, creamy as only nitro can be, soft carbonation
Comment – a very smooth, sessionable beer, light in the mouth and smooth, good to the last drop. If I can find this at home, I’ll pick up a case or two.

Not convinced they have the nitro can nailed down yet. Quite flat even for a nitro. (Bad can maybe?) Base stout is decent but the faint coffee is doing a lot oft he heavy lifting.

I picked up a can of Samuel Adams Nitro Coffee Stout for $2.99 at Valley Produce. This is the first of the new nitro cans from Sam Adams that I've seen and I'm interested to see how it will turn out, so lets see how it goes. 2016 Vintage. Poured from a tall 16oz can into a imperial pint glass.

A- The can looks good, it's got a nice look to it and it's a little eye catching. It poured a nice black color that took on more of dark brown color when held to the light with two and half fingers worth of very creamy tan head that died down to a thick ring that stayed till the end and it left some nice patchy rings of lacing behind. This is a very good looking beer, it's on point for a Nitro beer.

S- The aroma starts off with a lower amount of medium sweetness with the coffee being the first to show up and it imparts a nice black coffee aroma with a little bit of a chocolate aroma that makes it a little mocha like. Up next comes a little bit of doughy yeast followed by the malts which impart a dark malt and roasted malt aroma. This beer has a pretty nice aroma and it's what I would expect from the style.

T- The taste seems to be a little lighter than the aroma and it starts off with a medium amount of sweetness with the coffee still being the first to show up, it imparts the same aspects that it did in the aroma, but this time it's a little lighter. Up next comes a little bit of that doughy yeast that goes into the malts with the roasted malt and dark malts showing up, but it is just a little watery tasting. On the finish there's pretty much no bitterness with a nice slightly coffee and chocolate aftertaste. This is a nice tasting beer, but I was hoping the flavors would be just a little more robust.

M- Smooth, a little creamy, on the lighter side of being medium bodied with a slightly higher amount of medium carbonation. the mouthfeel was good and the nitro worked well with it.

Overall I thought this was a nice beer and solid example of the style, I liked it, but I thought it could be better and it seems like with a little work on the taste and the aroma this could be a very nice beer. This beer had ok drinkability, one pint is enough for me, I wouldn't want another one. What I like the most about this beer was the appearance, the mouthfeel and how the nitro worked with it, those were the highlights to me. What I like the least about this beer is the taste, it felt a little bland and watery for the style. I don't think I would buy this beer again, but I wouldn't turn one down. I can't say I would recommend it, but if you really like nitro and coffee beer then it's worth checking out. All in all I liked this beer, but I din;'t love and I would like to see them try the nitro can with a beer that's a little bolder. It's not a favorite Sam Adams beer and it's just slightly above average for the style. Solid work guys, but it could be better.

excellent beer. kinda blackish brownish color small head and smells of coffee. It taste coffee and expresso and i was so smooth and creamy that i couldnt put it down

Like a sweeter Guinness with a touch more coffee flavor; perhaps a better analogy would be that it's like a coffee-ized Left Hand Nitro Milk Stout. Looks much better than expected, and the mouthfeel is slick and smooth as advertised, and the flavor isn't overwhelmingly coffee.

Decided to get super bowl Sunday started off with a beer with breakfast. Haven't had a beer for breakfast since my college days over 15 years ago. I wanted to start my day off with something a little lower alcohol content so thus was the perfect choice. The best think about this beer is the apoearance. Dark with a very thick foamy head. Has a decent coffee smell and taste. For a Sam adams release it's solid. Compared to other craft beer coffee stouts it's ok. Definitely worth a try.

Poured from a 16 oz. can into a Sam Adams "Perfect Pint" glass.

Appearance: Pours a dark brownish amber with a lot of bubbles and a solid finger of creamy head with good retention.

Mouthfeel: Light to medium bodied with a moderate amount of carbonation. Very creamy, silky, and smooth.

A: Pours a near pitch black color with 2 fingers of tight nitro head that sticks around for a while. Leaves some good lacing

S: Roast and coffee up front along with some chocolate and light sweetness. Lightly muted by the nitro, but still nice

T: Follows the nose. Starts off with the roast and light coffee, followed by some sweetness and dark chocolate. Lightly bitter from the coffee and roast. Finishes with lingering roast and bitterness

O: A solid coffee stout that does well given the generally numbed-down aspect of most nitrogen-treated beers. Extremely easy to drink given the low carbonation. Worth trying

Really nice look with a big creamy head. Smell is nutty, coffee deliciousness. The taste, to me, was both, a pleasant surprise that I do not taste the aluminum can, but I was also a little disappointed in the watered down flavor. The feel is comforting, creamy goodness. Overall, I was apprehensive about buying a beer from a can, but it was quite pleasant in general.