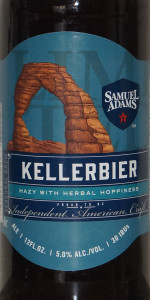 Notes: Kellerbiers originated in German cellars when brewers couldn’t wait to taste the fruits of their labors, so they tapped young beers straight from barrels. Our version ages on oak chips for a refreshing juxtaposition of light unfiltered malts with an intriguing woodsy note.
View: Beers | Place Reviews
Reviews: 56 | Ratings: 136 | Log in to view all ratings and sort
Reviews by BenHoppy:

This beer is a no good. Supposed to be hazy? Not hazy, murky brown with some soapy foam. Smell is malty, not hoppy. Malt bomb that is very bland.

It is the occasion of New Southern Samuel Springhouse Shipyard, But NO Super Bowl, Sunday (Week 676) and this is my opening salvo. I had read of the release of this one, apparently in a variety pack, but since I usually stick to single-o's, I figured that I would miss out. I was at the Beer & Beverage Shoppe on Friday on my way home from substitute teaching in a new school district when I spotted one last one on the singles shelf. Mine, all mine!

From the bottle: "Hazy with Herbal Hoppiness"; "Proud to be Independent, American, Craft." As to the former, try saying that five times fast! The shift from a hard to a silent "h" & back again is tough.

I Pop!ped the cap & being that even the label mentions "hazy" in addition to the Style Description doing the same, it was time for an aggro pour! Yippee. It foamed up nicely on its own, forming a dense cap of two fingers of foamy, rocky, tawny head with excellent retention. Keller, I mean, color was an oh-so-slightly hazy Amber to Deep Amber/Light Copper (SRM = > 9, < 13) & I hate to dun a bier for not being hazy enough, but I was disappointed. Nose reminded me a bit of a German Pils in that it was super bready in terms of its yeastiness, but with a very pleasant grassiness, like Saaz hops had been employed. Mmm. I do not see enough of this style to really have a basis for comparison, but this smells great. Mouthfeel was a little thin, not watery, but not terribly beyond it, either. The taste was really good, with caramel sweetness accompanying the breadiness, but held in check by the light grassiness of the hops. Oh my. I could see this as a very good CANdidate for my cooler. It finished surprisingly dry since it had evinced some sweetness throughout, up until the point of the swallow. I read some reviews where people did not like the caramel/burnt caramel/toffee aspect, but I was not bothered by it. I simply wish that it had been hazier since the yeast might have increased the mouthfeel.

Samuel Adams Kellerbier brewed by Boston Beer Company (Samuel Adams), with an ABV of 5.00% This Kellerbier pours out a nice light brown copper color with a small white head. Really digging the color of this brew. There is also a nice amount of spotty lacing to this brew, it sticks to the side of the glass well. The smell is rich with sweetness, roasted grains and malts. You also pick up on some nice mild hop bitterness in the smell as well. Between the look and smell this is one inviting brew. Now for the taste, it is bold but smooth with flavors. You first pick up on mild roasted hops, malts, and grains. There is a lot going on in this brew. The body of Samuel Adams Kellerbier is a solid medium. There is nothing overpowering about this brew, it has a super nice balance to it. This brew would go nice with lunch or dinner. I can't get over how smooth this brew goes down. The mouth feel is Bold, Crisp, Clean, Smooth and Refreshing. Overall I'm going to give Samuel Adams Kellerbier a 4.25 out of 5. I would definitely look this brew up again giving the opportunity to. Boston Beer Company (Samuel Adams), did a real nice job with this brew.

Look - golden and hazy, decent carbonation but not much head/lacing.
Smell - light and faint in smell. a hint of hops, some lemon, and malts.
Taste - a slight bite of hoppy bitterness with fairly strong malt flavor. Slight sweet and fruity finish. Balanced and smooth.
Feel - medium-bodied, medium carbonation, low ABV.
Overall - have not had a kellerbier before, so I don't have any comparisons. However, despite the light smell, I like the taste of the style and find this to be a pretty enjoyable beer.

Pours a copper orange with a finger width head that stays around my for a few minutes.
Smell is very lager like, with a little bit of smoke.
Taste is fine, definitely get the lager smell now,
Feel is good, nothing overly substantial, but ok.
Overall not the worst of the beers from the variety came in.