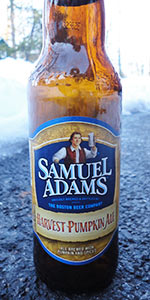 Draft - At first, I liked this beer, but after a couple of sips in, I couldn’t drink it anymore. Between the nutmeg and cinnamon, it smelled pretty good. I got some pumpkin in the taste but I felt like the sweetness overpowered it. As it warmed up, it got progressively worse.

Boston Beer Company, the maker of Samuel Adams brand beers, Twisted Tea, Angry Orchard, Angel City and more is completely insane. They are stark raving mad. It's one thing for the local brew pub to come out with a crack-pot brew that the staff liked at the Oktoberfest party. It's quite another thing for a large public corporation to do the exact same thing. Boston Beer Company is crazier than a June bug in January. How do I know? I drank their Harvest Pumpkin Ale.

Harvest Pumpkin Ale is very deeply orange in color in the ambient evening lighting of my house. It's almost brown, but they managed to keep enough red in the mix to generate an appropriately orange tint. This is a dark malty ale, suggesting that it's full of the good stuff and the strong grain flavors that are only found in such dark brews. The head foams up solidly, a tan color, retains, and laces. This beer, with it's lasting head of foam and it's dark orange pumpkin vibe, is pure eye candy.

The aroma of this beer lets you know this is going to be a challenge. The malt is clear and present, blending with grassy hops and a giant helping of pumpkin and pumpkin pie spices. Pure lunacy. It doesn't smell like a beer. It smells like a pumpkin pie.

I don't eat pumpkin pie. Actually, I hate pumpkin pie, but it's the unpleasant texture not the taste. That's a good thing because I got three of these in my Fall Variety Pack and these ales are a beer glass of pumpkin pie. The hops blend with the pumpkin and pumpkin pie spices to create a seamlessly festive holiday pie feel. Now as we get on towards October, this pumpkin ale really brings on that Halloween feeling. It's a heck of a lot better than eating an actual pumpkin pie.

The feel of this ale is extremely substantial. The last thing to realize about this ale is also the first thing: it's way, way, way out there in the wild blue yonder. In a world of white bread and dumbed-down everything, this is a very big ale. Recently I've been reading about the health benefits of beer - which are huge with craft brews incidentally, covering everything from anti-oxidants to folic acid. Is this a great world or what? So then, the nutritional value of this ale must be enough to last a week. It seems like you could eat it with a knife and fork. Sure, one of the Bros says one is enough. It's very filling. After one, you're full.

Never stop being out there on the lunatic fringe, BBC. If your uncle says they like something, and it's a hit at the holiday party, we expect national distribution within months.

Appearance: Clear deep amber in color with a large, dense off-white head, which persists quite well. Thin Belgian-type lacing coats the glass walls. The carbonation is slight and slow-rising. (3.75/5.0)

Drinkability/notes: Very nice, one of the nicer pumpkin seasonals, well worth a try. It seems a fitting companion to the Autumn Equinox tonight. (4.0/5.0)

Aroma has dark toffee malt and a slight vegetative pumpkin feel with slight spice like earthy nutmeg. Almost a darker sweetness of molasses is noticed with caramel too.

Taste carries much of the same profile as the nose with a malty sweetness upfront accenting that vegetative pumpkin character and earthy spice like nutmeg and faint cinnamon. The aftertaste is mostly vegetative and a dryness with spices. Its not over the top but its noticeable as a leading trait.

This is medium bodied and modestly carbonated. An enjoyable pumpkin offering where you can actually taste the pumpkin flavor and not just the spices typically associated with it. Nicely executed.

Pours dark amber to chestnut color with generous head that lingers, and then recedes to an enduring slim layer for the rest of the pint. Nose has ripe pumpkin pie aromas. Palate offers a gorgeous melody of pumpkin and dessert spices - what a pleasant surprise. Rather easy drinking and not overwhelming with pumpkin on the finish and aftertaste.

Mild pumpkin aroma with some cinnamon and a dash of ginger to complement roasted caramel malt that outweighs the pumpkin to a considerable degree. I'd like to smell the pumpkin much more, but it has a nice breadth of aromas.

Good taste, with the pumpkin peeking through more than the nose indicated initially. It blends well with the caramel, with a touch of dark chocolate combining with the spices mentioned above as well. Good balance; a nice blend of sweet and tart.

Good, creamy, effervescent mouthfeel for a fine malty brew, and easy to gulp. I certainly wouldn't put it in the category of ST's Pumpking, easily the best pumpkin brew I've ever had (in no small part because of the greater prominence of the main ingredient), but it's well worth a try, and is a really good addition to the Harvest Collection.

Pretty tough to pull some scents out of this one. Spices, pumpkin and malt, none of which jump out.

Flavors are not overly sweet pretty but very muted. All the decent flavor seems to rest in the aftertaste, along with pumpkin I get cinnamon, clove, and toasty malts. Pretty bland overall.

Has a good body but a tad too carbonated, a little tinny.

The few pumpkin ales I tried last year I liked, but I found this one pretty boring.

Pumpkin beers are an odd lot. Most are just spiced ales, although some do use the actual fruit in the mash. Regardless, many of them seem way overdone, while others barely taste or smell of "pumpkin" at all. In fact, what we're really talking about here are pumpkin pie spices: cinnamon, ginger, allspice, and nutmeg. That said, what I want out of a pumpkin beer is a beer that smells fairly strongly of those spices, and offers a bit of their flavors, but which is also it's own beer underneath. I don't care if it's golden and light (might be an interesting change), or toasty and caramelish (as most are).

Samuel Adams Harvest Pumpkin Ale is of the deep-copper colored, caramelish and toasty variety. Fortunately they've kept it in check and it's not overly malty (and filling). The spices are bright in the nose, and a little bit softer in the flavor. The cinnamon is clear, the allspice is present, and the ginger and nutmeg can be found here and there. They work well with the malt, and provide a bit of balance (the bitterness level is clearly dialed back a touch to compensate for them). It's well-balanced, and highly drinkable.

As far as pumpkin beers go, I could easily enjoy two of these in a row, and possibly a third before I became 'over-spiced' myself. Nicely done!

From the Harvest Sampler pack...

Pours out an inctedibly deep orange-crimson with a towering fluffy head... Very autumn like appearance to this one... High marks for the persistence of the head...

I love the fact that this beer actually smells like pumpkins and not just spices.. It definitely has the spice aspect to it but its not overpowering or anything... More of a malty pumpkin ale if you will..

Man... This one is terrific... It looks as if I like this one a little better than others but I found the flavors here dead on... Some spices but not too much... Some earthy pumpkin flavors but not so much that its bland... Thick and creamy feeling as well..

I really liked this one and personally wish they would make this a seasonal sixer along with the Octoberfest... Very nicely done...

Serving temp was around 50 degrees, poured from a 12oz bottle into a pint glass.

A: good look to the beer. Perfect fall color of deep amber or copper, light to medium head, quickly faded away. Almost no lacing.

S: Rather boring, no smell of pumpkin or fall like spices.

T:Taste was almost same as smell, pretty boring. Small after taste of spices and pumpkin. Little taste of malt.

M: Light, but almost watered down.

O: I am disappointed by this brew. I always love fall seasonal beer (even though most of them are not great.) I would go for Sam Adams Octoberfest over the Pumpkin Harvest. I would not recommend this beer to a friend.

Pours a dark amber with 1/4" of bubbly head that quickly fades to nothing. Smells of pumpkin spice and subtle caramel malt. This beer tastes like grandma's pumpkin pie; sweet pumpkin, nutmeg, and spices. Smooth, crisp, and medium bodied, very drinkable.

Like dessert in bottle. A sessionable beer that's perfect for the holidays (even though it comes out in August).