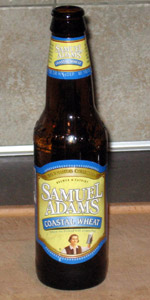 Refreshing however loses points for an odd aftertaste. Others have described it as pledge-like and I would agree.

This reminds me alot of the Sam Adams Summer Ale excpet that it's lighter and crisp. Lemon aroma like the summer and actually alot easier to drink. A great beer to consume during a summer cook out.

I really enjoyed this one. Sam Adams rarely dissapoints.

Samuel Adams Coastal Wheat Ale was an amber color with a modest white head that quickly dissipated to a very thin collar.

The aroma was largely lemon citrus and lightly banana.

The taste mild lemon, crisp and somewhat dry at the end. The banana I got with the aroma did not appear in the flavor. Some sweet malt made an appearance late, after warming.

Drinkability was good with a pleasant taste and low ABV.

Nice flavor, but I agree that this should be a summer beer instead of featured in the winter sampler.

Seems like an odd choice for winter, but I can't complain too much about a new beer. Unless it sucks and makes me wonder why the Cream Stout or Brown Ale or any other suitable beer didn't make the cut. Unfortunately, that ended up being the case.

Appears to style in a pint glass. Not a large head on the beer, but has a lasting cap and lacing. Did have some sediment at the bottom that added more haze. Looks fine.

Lemony. Deserves some credit for not smelling fakey. Some wheat underneath that. Really not interesting.

Lemon is acidic and the total lack of yeasty character is disappointing. I can't see this taking hold in the summer when the far superior Summer Ale is out. Definitely pales in comparison to beers like 312 and Oberon as well. Surprising lack of sweetness and malt character also. As one dimensional as it gets. No hop character worth mentioning. This would be fine if it tasted good and was refreshing, but it really isn't. It tastes like it's not done yet.

Isn't wheat supposed to make a beer smooth? Not nearly as smooth as it needs to be. Too thin of a body, and feels overly prickly. For some reason, abv is not listed, but I would guess it comes in around 5%.

What's the point here? Of all the fruits to make a beer with, lemon is probably the least interesting. I think the much maligned Cranberry Lambic is leaps and bounds better than this. The lemon peel was too acidic and bitter, and maybe lemon juice would have been better. And it's totally out of place in this season. It's a baffling choice, as there's no shortage of fruit/wheat Sam Adams beers, all of which are better than this, to my knowledge.

Coastal Wheat might be getting a bad rap because people expect it to be a full-on wheat beer, whereas it's really a pale wheat.

A: even with that being said, it doesn't look all that appealing, but still considerably better than the Island Wheat I had earlier this week, from Capital Brewery (though I like their other offerings).
Hazy saffron color is the best I can describe it. nice rocky, white head, but it disappears quickly. The hazy saffron is still off putting. It gets better though.

T: the taste folows suit on the smell. Honeslty, considering this is a PALE wheat ale, this is fantastic. This would pass for a solid 'regular' wheat ale.

M & D: American wheat's aren't really my thing, and the mouthfeel really doesn't impress. I'd drink a German weissebier over this or any other am. wheat any day of the week.
That being said, if you haven't picked up already, this is a pretty damn good, light, wheat beer.

S- Blueberry and citrus up front. nice wheat behind.

T- i can taste the fruit in it and the malt is gentle on the palate. Soft lemon taste. Touch of bitter on the aftertaste.

M- Not pleased with this one on the palate. Seemed a touch watered down.

D- Appearance and smell kind of gets me all pumped up and then there was a giant let down on the taste and finish to me. Overall this one is just so so for me.

Poured from a 12oz bottle into the Sam Adams glass.

A: Hazy yellow with a white head. The head disappears quickly and there isn't much that remains on the glass. The beer does however have a nice unfiltered look with the yeast almost appearing to be in stasis.

T: Tastes like a wheat pale with the lemon the bars put in it already included.

M: Light bodied. Not a lot of carbonation.

D: Good on a summer day if you like lemons.

Pours a somewhat hazy yellow-orange, decent sudsy white head that sticks around well. Smell is pretty eh, kinda that generic macro smell (aka urine) with a touch of wheat and light fruit. Taste is very boring, incredibly thin mouthfeel, tastes almost like seltzer water while in my mouth, the aftertaste is a little better with big wheat/bread taste with a small touch of lemon. The lemon taste gains some ground towards the end, but it's not saving this one. On the label it calls this a "fresh twist on the popular Hefeweizen style", what a joke. And what is this doing in the winter sampler pack? Drinkability is okay I guess since it's so light and watery, but I definitely am not a fan of this one.

Pours a hazy dark yellow with a big head that both retains and laces quite well. Smells of hops, light fruits, and citrus with a slight metallic smell. Tastes of spicy citrus and hops with notes of wheat. Moderately high carbonation and a moderately light body with very little bitterness. Nothing too complex here, but a very drinkable wheat ale for a warm day with an appropriate ABV. Not bad, not great, but good!

Poured from a bottle into a Samuel Adams pint glass.

Ah, it's been too long since I've had a Sam Adams... I wound up getting a Brewmaster Variety Pack. This was included with Irish Red and Latitude 48 IPA -- the latter of which I've already had.

Appearance: There's next to no head on this beer... none at all. It's very thing and wispy. As for the lacing, there's none of that to speak of. The color of the beer is nice... a hazy yellow color that reminds me of Mountain Dew when I put it up to the light.

Smell: Very wheat-heavy, with traces of citrus in there as well. Pleasant, but nothing overpowering or too exciting.

Taste: Above average, but nothing that'll make your pupils dilate. I feel like this could well be Samuel Adam's summer beer because it's really easy to drink. Clean, wheaty, citrusy... tasty.

Mouthfeel: Watery, with mild carbonation, but smooth as it foams up a bit on your tongue. Pretty average.

Overall, I really like Coastal Wheat. Far from my favorite Sam Adams beer, but I'll have no problem drinking the other that's in the six-pack. Another good offering from S.A.

Poured into a pint glass this brew has a hazy pale yellow color. The aroma is light but has some lemon and some floral notes. The tastes is mild and has more lemon flavor than the banana that comes in a wheat brew. The carbonation is moderate and the finish is a little bitter. Just an OK beer, nothing to write home about.

A - Cloudy and yellow, small whitish head that dissipated quickly.

T - Wheat with some lemony citrus and some sort of chemical aftertaste on the end. A bit sweet and sugary, not horrible, but not really good.

D - It's pretty unoffensive, but just don't like it enough to down a lot off.

Found at the Sam Adams bar at Myrtle Beach Airport in South Carolina. This has a light but cloudy straw yellow color with a decent white froth on top and pretty good lacing to boot. The aroma brings light lemon fruit nougat sponge cake. The flavor has some citrus hop, lemon brightness and crisp grassy biscuit. I get some dishater soapiness here that makes this a bit less than a simple Seven-Up summer brew. But it is a refreshing option, well carbonated and plenty drinkable if the dishwater doesn't get to you. Not something I'll need to revisit.

A- A light, hazy yellow with some cloudiness.
S- Not much very faint aroma of lemon and wheat.
T- Much like the smell not much, a hint of citrus and wheat, but lacking any substance or significant flavors.
M- Watery, it goes down very easy but doesn't really do much.
O- Very disappointing for a Samuel Adams product, if it wasn't so bland, I'm sure I would enjoy it more.