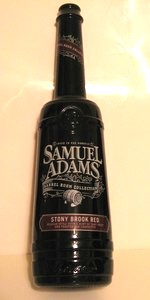 Reviewed by Thorpe429 from Illinois

Pours a reddish-amber color with a half-finger off-white head and a bit of spotty lacing. The nose is strong cherries with a bit of a lactic character. A bit of cream and oak in there as well.

The flavor is fairly impressive and reminds me quite a bit of a Flanders Oud Bruin. It has some oak character and a fairly-strong cherry component. There is a bit of caramel. Quite a bit of cherry and oak. It doesn't have all that much depth, but they've done fairly well for themselves with this beer. This is my first foray into the barrel-room collection, and I'm impressed. All around, it's a bit mild and doesn't quite stand out, but I will not complain about this.

The body is medium with a lower level of carbonation and a fairly mild amount of sourness. The oak is there, but it's not particularly tannic. This is a good brew and a step in the right direction. Personally, I would love for Sam Adams to nail this style and get a bit more exposure for this type of brew. This is much better than I expected, to say the least.

Rated by Robbles from New York

3.41/5  rDev -8.8%
look: 3.75 | smell: 3.25 | taste: 3.5 | feel: 3.5 | overall: 3.25
Poured into a tulip, the appearance was a stiff burnt dark red color with a finger's worth of white foamy head that quickly slid off in a semi-fizzy sort of way. No lace.
The aroma had some cherry skin and flesh, some dried grass, light acidic citrus pulp, burnt bread, some vinegar, green apples and a tart to almost sour glossing of orange/lemon rind.
The flavor was mildly sour to present the acidic level with some lemon and orange-like tartness, light bitterness. Sour to tart apple and cherry flesh to acidic sort of aftertaste.
The mouthfeel was medium bodied with a decent sipping quality about it. Carbonation felt fine. ABV felt appropriate. Finish was quick with some acidic fizz.
Overall, well, it's a decent attempt at an American Wild ale. The "pucker" factor is actually there, though I didn't mention in the mouthfeel portion of this review.

Overall: Taste was decent but I think its fruitiness was definitely affected by the harshness of the carbonation, which I felt mellowed it, when compared to the aroma. For me, the problem all stemmed from the harshness of the carbonation when swallowing, which I thought was way more than even any soda that I’ve drank before. If toned down a bit, I think that I would have enjoyed it a lot more.

Reviewed by Sourman49 from Texas

Rated by LJTate from Pennsylvania

Reviewed by cwalter from New York

3.66/5  rDev -2.1%
look: 3.5 | smell: 3.75 | taste: 3.75 | feel: 3.5 | overall: 3.5
This beer is a dark ruby red color. A lot of carbonation and does not support much of a head. The aroma is vinegar, fermented tart cherries and rasberries as well as biscuity malts. Up front in the taste you get fermented cherries, rasberries and vinegar. Then a biscuit/cracker malt flavor mellows out this beer mid sip. In the back end it has a decent lactic acid puckering quality. A nice take on a Flanders red ale.
Aug 31, 2016
Rated: 3.98 by Gagnonsux from Texas

The mouthfeel is super carbonated, medium light body with a crisp tangy finish.

This is a very pleasant wild ale, the flavors are pronounced, the wood note is very noticeable; however, I cannot distinguish if it is oak or not. It is just decent beer, had better wild ales.

Looks very nice in the glass. Deep dk red with a decent off white head. no carbonation could be seen, but the head hung around for a while.

Aroma is slightly tart with a strong dark fruit smell.

I like the way this one tastes. Sour notes right up front, and then the plums and dk fruit come through later.

Feel and mouth are a touch above medium.

All in all, glad I got to try this one.

Reviewed by boisehack from Idaho

3.73/5  rDev -0.3%
look: 4.25 | smell: 3 | taste: 4 | feel: 4 | overall: 3.75
OK! Wow. Right now I am going to say that I don't know if I should review a beer with a meal. But when I buy a "special" beer, it usually goes with a special meal. So.
I bought a ribeye, bone in, and Brussels sprouts, and some kind of baguette for garlic bread, and expected to get some Brother Thelonius, but it is no longer available from my Albertson's, so I bought this, 'cause it had a cork in it too! And it was on sale, $3 off.
I think this would go better with pork, because it was pretty sour. Not The Dissident kind of sour, and the label did say "tart", but the apples on my 85 year old apple tree are a little tart, but not sour. So I poured it into a regular pint glass, maybe it would be better in a tulip, but I did. And I didn't pour aggressively at first, but I didn't see much action, so I kinda dumped it in. A lot of big bubbles, and they went away immediately, and there was no head, but some effervescence at the surface. No lacing at all.
Then I looked at the color. It was a nice bright orange-red, holding it up to the CFL fixture in the kitchen. And I smelled it. Now, this is where the problem is. If you are eating steak and caramelized Brussels sprouts and toasted garlic bread, can you smell a beer properly? Probably not. But it smelled a bit sour and cidery to me, but kinda rotten, like when you mow under an apple tree that has dropped a lot of fruit, and the bees are a bit drunk. And then I drank some. Hmmm! Sour, and like apple cider, and prunes, and figgy. I liked it! I was supposed to taste the barley and oak, but that escaped me. It was nice in the mouth too, not thick at all, a little puckery, but pleasant.
Overall, this was a nice surprise, and I might give it a little higher rating with pork or all alone, but I want to be honest, and I don't know how to weight something like that. But if you like a little sour in your beer, you should try this one! As far as what a Flanders Red should be like, I haven't a clue.