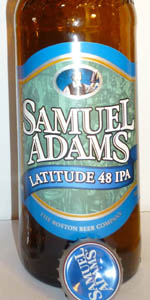 I love Sam Adams and I tried this one a while ago, but didn’t get around to reviewing it. I found a fresh batch that I wanted to try again and to review so let’s take a look. It has a mild, but respectable 6.0% ABV with 60 IBUs. The name is derived from the “hop belt” which is largely centered around the 48th Parallel and this variety features the Mosaic hops from the Pacific Northwest which give it a distinctive citrus hoppy component. There are several other hops in this variety as well.

Look-I served chilled and fresh into a tall glass and pours a very clear amber color with a reddish copper hue in the right light. The head is one finger thick and frothy which soon settles down into a thin film.

Smell-It has a bready malt backbone freckled with noticeable citrus hops which come through nicely.

Taste-It has the same nice bready malt flavor that the nose picked up, but also had a noticeable honey overtone to it as well. You all know how nicely honey plays with citrus so this is delicious. That was a pleasant surprise. Then I get orange zest, lemon peel, tangerine, and some grassy hops that show up later on with the delayed release of carbonation which dances simultaneously with the hops. The alcohol is mild and bites the citrus at the end.

Mouthfeel-It has a smooth medium-bodied feel with a delayed release of the respectable levels of carbonation. It leaves a lingering, but fine-tuned coating on the tongue composed of the hop resins and a slight citrus tinge from the hops.

Overall-Lending to the presence of the Mosiac hops, I recognize a mild West Coast Style IPA aspect to this brew. It is crisp, finishes clean, and is not too hoppy. Although I am a hop head, it is nice sometimes for something more realistic and mild for those long rainy days. Great job, Sam Adams!

Decent brew from SA...I prefer this over Rebel IPA.Best Samuel Adams I've had so far.

This beer makes up for some of the duds in the Summer Brewmaster's Selection.

A -- Deep copper with a light tan head, surprised to see the dark, rich color.

M -- Soft to chewy mouthfeel with a medium to heavy body.

D -- Drinkability is very nice, but could become overpowering after a couple. The flavor and character of this brew is very nice. I think they got the hop balance better than Goose Island's Mild Winter -- which begs the question, this big and bold a beer in a Summer Seasonal selection?

Pours a nice amber color with two fingers of head that quickly settled to a thin cap before dispersing totally. Moderate amount of sticky lacing is left on the glass.

Definate hoppy aroma that definately is not West Coast in style. This is a herbal, grassy hop aroma. There might be some Simcoe hop in there as well but it plays a very small part.

The flavor starts of with a lot of grassy hops but as I delve deeper into the glass, the fruity hops start to come out. Has a Juicy Fruit flavor that plays against the medicinal nature of the Old World hops. Bitterness is moderate. The malt adds little flavor but does give a good dose of sweetness.

Although the hop bill is not something that lovers of West Coast type of IPAs, it does deliver a solid hop flavor. I would not mind having this in my fridge regularly.

Poured from the bottle a coppery orange brown with a tight white head that remained for much of the beer and left nice lacing. Smell is of piney and citrus hops maybe a hint of grass. Taste is dominated by hops but not a real strong hop flavor very mild and citrusy, not a ton of malt but a hint of sweetness come from the malt. Mouthfeel is clean and crisp medium carbonation. This is not an overwhelming ipa which might be nice for someone getting into the craft realm. That said its a solid no frills or big kick ipa that is very drinkable.

Pours a bright amber-orange colour with thick white head that dissipates, leaving lots of lacing around the glass. Smells of a whole mix of hops, citrus with some earthy and grassy notes, with some caramel sweetness. Nicely balanced flavour with bitterness and some sweetness. Really nice carbonation level. I enjoy this IPA from Sam Adams.

I think Sam Adams gets a bad rep, sometimes. This beer has an exceptional color and head. Good lacing and perfect carbonation. The aroma is one of hops and malt. Very balanced. The taste is identical to the smell. This beer is a perfect marriage between sweet and bitter. Exceptionally balanced. This is a beer that should be a welcomed addition to your beer quiver. This beer goes great with spicy foods, but could also be a good session beer despite the fact that it is approximately one percent ABV % higher than a traditional session beer. I will not forget this beer.

S: Sweet, citrusy and slightly floral hops are dominant with a grainy undercurrent.

T: The hop profile is outstanding. Big grapefruit leaning citrus flavor gives way to a mounting bitterness that really hits the back of your throat and lingers in the aftertaste. Malt is unassuming but there if you look and provides a nice little degree of balance so that the hops are not overpowering.

D: An all nighter.

Sam Adams IPA? Not exactly holding my breath. SABL is one of my favorite beers, but this may be outside their comfort zone.

Appearance- A rich amber, almost ruby hue. Very nice looking. A full inch of creamy tan head mellows into a soapy cap and laces nicely. It'd look more beautiful if I wasn't afraid that the dark color is a sign of maltiness to come.

Smell- Quite malty. There are some nice hop aromas, but mostly earthy and grassy. A touch of citrus, but only a slight hint. Caramel and biscuit.

Taste- Follows the nose. More biscuit than caramel. The hops are okay. Grassy and a little floral. Some pine. The malt sweetness comes in at the end again.

Drinkability- More malt on the finish than I'd prefer.

I like IPAs a certain way. Dry, hoppy as hell, tons of citrus, almost zero malt. It's a preference. Other folks will really enjoy this type, but not me. It's totally fine, and a pretty decent effort, but I wouldn't get it again, frankly.

T: The hops are way stronger in taste, than in smell. Lots of tropical citric fruits and even some nice pine. Bitter hops. Bready sweet caramell malt.

M: Aftertaste is rather long and bitter. Body is medium and carbonation quite strong.

O: Not bad, but not very exciting either.

A different take from the Nobile Pils, more cowbell! And more cowbell ye shall have .... Sam Adams does not do any 80 IBU or larger beers, probably because they try not to alter anybody pallet .... however, they did jack this one a bit!