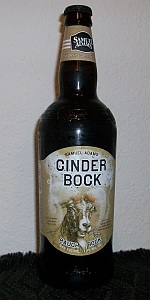 4.29/5  rDev +20.2%
look: 5 | smell: 4 | taste: 4.5 | feel: 3.75 | overall: 4.25
For the finale of New Samuel Adams Beer Sunday, It's Gonna Be a Long Trail (Week 706), I am delving into the depths. This was one that I hunted down & then set aside, forgotten until today. Kenny Longshore was a fellow plankowner & shipmate aboard the USS Normandy (CG-60) as well as a fellow member of the SDBG. We attended the 25-year reunion in Norfolk, VA in 2014 & upon returning to his home in Whidbey Island, WA, he laid down for a nap & never awoke. I went back to Norfolk to assist in scattering his ashes at sea from the fantail of the Normandy & his widow was telling me about how much he enjoyed following my exploits. When I returned home, his ghost was awaiting me, perched atop a box of beer near my kitchen door & he is a regular visitor when I am drinking at home. We are joined by other fallen shipmates & even my late Pops on occasion, but Kenny is a regular. He kept pointing down towards the box upon which he was perched & it suddenly dawned on me.

Smoke up front in the flavor, then sweet malts on the back end. Not cloying; actually very enjoyable.

Flavor is much more phenolic and smoke, with deeply caramelly notes. Nice and bready, toasted, caramel malt. On the sweet and smoky side, would go great with bbq.