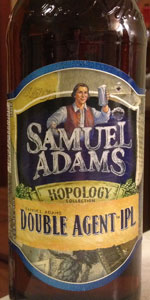 Notes: The distinct hop character of an IPA in a smooth lager. The hops in this brew lend a bright grapefruit, citrus, floral aroma and flavor with a refreshing, crisp lager finish
View: Beers | Place Reviews
Reviews: 319 | Ratings: 1,572 | Log in to view all ratings and sort
Reviews by AMCPhD:

Found this in a 12-pack on its own, not part of a mix-pack. Rich amber color, thick white head; looks lovely. Aromas of pine and citrus. Strong hop flavor, more pine and plenty of citrus. A bit out of balance on the hop side, but that's not a tragedy. Smooth drinking throughout no matter the strength of flavor. Clean finish. Really remarkable.

What we have here is a straight 5% abv lager with a little extra malt and a lot extra hop. This fills a badly needed hole in the market, one of long standing, namely having that IPA hoppiness without the attendant IPA keister-kicking that you get when quaffing 7% and on up. Strongly flavored, but "sessionable", as they say - meaning you can drink in mass quantities with relatively less subsequent punishment.

I've since learned that others have already come up with a similar brew, especially on the West Coast. I'd be interested to learn what they're charging for the pleasure. The usual Sam Adams retail in glamorous Worcester, MA is around $15 or thereabouts for a 12-pack. By no means is that cheap, but I imagine it'll be tricky to find something else this strongly flavorful yet easy to drink for that price. We'll see. The Rumpole budget usually precludes beer in that range, but this stuff is so good that adjustments might need to be made.

Well done, Sam old egg. This one's up there with the dear old Noble Pils, which ought to be returned to the 12-pack format too. Meantime this'll do very nicely while it lasts.

Aroma was hoppy and yielded plenty of lager yeast aroma, not unlike Bruery's humulus lager. Plenty of hop oil and resin, lager esters, amounting to a unique and enjoyable aroma.

The taste is a little bit of everything, small amounts of citrus and pine, but still plenty of lager character. Earthy malt aspect while remaining plenty light in the mouthfeel. Biscuit/cracker malt stays light, carbonation and hops stay lively. Plenty grassy. While Pilsner Urquell has been seemingly dumbed down over the last decade or so, this is a great alternative if you fell in love with that beer in the 80s/90s but don't get moved by it so anymore.

The hops stay alive and kickin' throughout the entire mouthfeel. Prickly, pithy, snappy. Always herbal. Plenty of bitterness. I'm not sure if these are just a bunch of noble hops of or not, but they are pretty potent, without obscuring what makes this a lager. Dry, hoppy, lagery.

Appearance: Clear bright golden yellow - ranging towards the amber shades of gold. Poured a dense 1/4" off-white head, which died down to a persistent 1/16" thick foam across the top some strands and islands of persistent lacing noted. Looks like a IPA, but clearer and brighter.

Smell: Pine, grapefruit citrus dominate. There is a hint of malt under it all trying to get out, but it can't. I get this barest hint of sweetness with a swirl, but then the hops come right back and cover it up.

Taste: Bitter with pine right up front...and then it transitions into a well hopped, but bitter finish lager. The malt is crisp...and not sweet enough to balance against the strong hops. You get a hint of sweetness in passing between the hoppy start and bitter finish of this beer. Hops at the end are bitter, with a combination of tea and pine again. A nice dose of hop flavor, but unbalanced and it's not working great for me.

Mouthfeel: Highly carbonated - close to fizzy but not quite. Lots of hop oils sticking to the teeth and they lingered quite a bit.

Overall / Drinkability: Well, it drinks exactly as the brewer meant it - a combination of a west coast IPA and a lager. I'll give it high marks for creativity and for meeting exactly what they described it to be...except for the smoothness of the lager. That's missing because I think the hop wallop you get with this beer you need the higher level of sweetness from an ale yeast + caramel malts to balance against the hop bitterness. The lager is under there, but it's not sweet enough and when that sweetness comes out between the hop start and finish, it's odd...like its artificial or saccharine. So interesting concept, but for me, it's not working. One is enough - and I had a hard time finishing this one. Nice looking beer though - that lacing you get with the hops is certainly pleasant to look at.

T- Flavors do compare to an IPA and a lager. A moderate amount of piney and floral hops come through with some citrus flavors, with caramel malts and bready lager yeast flavors providing the backbone. Flavor is pretty good for a fairly light beer.

M- Light to medium bodied, medium carbonation, could put a few of these away pretty easily.

O- Pretty well done based on the intentions. This is a hoppy lager with some floral and tropical notes and it seems like that was the exact intention.

Pours from a 12 oz bottle into a pint glass. The color is a light, lemon tea color with a medium sized white head. Some lacing is present and the head retention is quite nice.

Nice taste. To tell the truth, this one tastes a lot like the Noble Pils beer from SA. Nice hop flavor with some bitterness, but not IPA bitterness. More mango and pineapple with some slight orange flavors. Nice bitterness. Solid malt backbone, but not much character on the malt end. Slightly bready. Medium bodied.

A decent beer. Not much different than other SA beers but a nice change of pace from a traditional pale lager.

Into a tapered tumbler it pours with a flurry of bubbles that settle into a thin compact layer of creamy white foam. A thick band of lace is left behind, dripping downward into the glass. Pale golden orange, bright clarity and the occasional rising bubbles.

Dried orange taste, bready pale malt, lingering herbal hop bitterness. LIght bodied, reminiscent of a light bodied IPA, so they achieved that at least. However the IPA model is fairly dull here. Seems as if it could use a fair amount of tweaking to improve, though the product isn't at all bad, just a little uninspired.

I hear there's a mole in the agency. ...Or maybe it was the garden... Anyway, this stuff pours clear sunrise amber topped by a finger of off-white foam. The nose comprises candied orange peel, light leek, sweet caramel, and grass. The taste holds notes of orange rind, light lemon rind, grapefruit peel, mild caramel, and a bit of honey dripping from a tall blade of grass. The body is a light medium, with a light moderate carbonation and a fluid feel. Overall, a nice little hoppy lager, nothing overtly special, but a generally enjoyable experience.