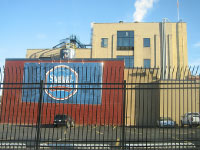 Notes: Location of their R&D facility where they also brew limited batches for the Boston market. Tours are also available.
BEER STATS

Amazing brewery with plenty of one off selections to choose from on the tap list. Unfortunately only had some pretzels and a charcuterie board for food, but as a taproom you can't ask for much more. The food was great otherwise. Loved the variety of beer styles and experiments only Sam Adam's had the time to dream up. Highly recommended all around.

It was long ago 2004, I was in the prime of my life, turning 22 I went to Boston to see one of my brothers, for my 22nd birthday we went to his place of employment, Just happened to be The Boston beer company. I got an executive VIP treatment as a SWAT Officer in NEW YORK at the time. Jim Koch, The man behind the recipe was at the Brewing complex on July 16th. Not only was I able to try as many of the beers as I wanted, but I also got to tour the facility with Jim. It was one of the most amazing and inspiring trips I have ever taken. Way back then only 32 Stills were operational. That for me was 32 different beers and new ideas, I was able to taste the Stills in different stages of production and I was able to flash cool beer. It was important to me, not to miss a beat. I let Jim have my opinion on all the varieties and flavors as I toured, He has a Plate of Cheese, Crackers, Pretzels, peanuts, Smoked sausages, and We had some wings delivered. After narrowing down my favorites, in 3 hours we sat down in the executive area and ordered some burgers. My Brother he and I talked for a few more hours, he took a few takes on my favorites for beer and some suggestions, that later came out. The attributes of this facility were astonishing to me. being the 5th brewing facility I ever visited. My impression was skewed because I was treated like a royal. But it was overwhelmingly approachable. But being in Boston Mass and Visiting the Naval Ships earlier that day, I have to say that this 11 am - 5 pm or so visit was one of the most special events of my life. I am thankful my bother has a huge passion for beer and chooses Boston to make his home. I still have a Commitment to the Boston Beer Company and Samuel Adams. Trying new beers each year when he comes home for the holidays, I am sure Jim has long since forgotten me, But I will never forget the man that was so passionate about his craft. The vibe was a 5 because I was treated like royalty with the creator, Of course, not all beers offered were the best ever, But the quality of the facility at that time was astonishing. I had to take a 1/4 point off, because of the overflow on the floor in the factory. I mean, its still a party foul. the rest was perfect. Highly recommend a privet tour of the faculty. You most likely will never tour with Jim K himself. but I am sure you will have a wonderful time.

So to be fair, I was last at Sam Adams Brewery in 2011 and Lord knows a lot can happen in 8 years. I was also there when the Bruins won the Stanley Cup so the city was in good spirits which may have helped me fall in love with it. The brewery was great. Not in the nicest part of town but the service and quality of the beer made it worth it.

Beer lovers will enjoy the brewery tour of the "flagship" location for Sam Adams. The beer brewed here serves only the Boston area. It is also the home to experimental attempts. If you are lucky, you may get one of these to taste on the tour.

The tour starts out with a lot of beer memorabilia. You can see the various awards won and get a general idea for the history of Sam Adams. The tour while brief, does give a great overview of the beer brewing process. I particularly like the opportunity to smell and taste the raw ingredients.

The highlight of the tour is the tasting room. You'll get three different styles and the tour guide will entertain, while teaching, you with how to taste beer with appreciation.

All in all, it's a fun little diversion. Don't expect too much beyond this review and you'll have a great time.

Hey, it's in Boston and you can park on the street! No charge! Same with the tour. I've done plenty of tours, but this one was one of the best. The guide was great fun and entertaining and we were introduced to some of their more interesting brews. We sat around in long tables and passed the pitchers about; what's not to like? No pretensions like some other newer craft breweries; I don't need a $10 pretzel!

We did the barrel room tour, which was actually a blast. It exceeded our expectations. We got to spend a good hour tasting 3 barrel aged beers that are exclusive to the local brewery. We have never had a Sam Adams beer we liked, but all three we had were actually pretty good. One of which I'd definitely order in the store. Got to nibble on aged cheddar and ask all the questions we wanted to ask about the company and the process. It was great that we were two of eight so small intimate setting. Went to the main tasting room after, which is obviously much more crowded but there was a good vibe going on. A lot of tables inside to drink and good people. There were a couple solid NE DIPA available and they were pretty solid - something we'd buy if they ever sold in stores. We had a fun time, but very confusing why they are making pretty solid and legit beers but won't sell them outside the brewery. ? Ohwell. Just have to go visit...

Great place to visit. Staff is awesome! Got to sample some beer that was not even in production yet.

The Sam Adams brewery has a proper taproom now. As someone who lives a 5 minute walk away I am happy to report the taproom is pretty sweet. You will find a couple of the usual offering plus some brewery only stuff. Often you will see stuff served here that will be brewed on a much larger scale later on and put in mix packs or what not. Expect about 9 drafts and 1 cask available. If you pay with a credit card there won't be an option to tip because the employees are paid by the brewery. Cash tips go to charity. I like this. Bravo, Boston Beer Company.

The room isn't huge so expect it to be crowded on saturdays. This is a huge tourist destination, afterall. They have table shuffleboard and board games. Sometimes they have a local restaurant set up selling food. Chilicates is sometimes there and they make very good tacos. They also have a restaurant a few blocks away.

You can get here via the Orange Line subway. Get off at Stonybrook. The Jamaica Plain neighborhood is pretty sweet when it comes to beer. It also has Turtle Swamp Brewery, Casa Verde, Brendan Behan, Canary Square, Vee Vee and Galway House for your craft beer needs.

Weekday visit. Good selection and the staff was great. They were one of the first and still trying to put out good beer and should still be respected. Without them we wouldn’t have what we have now.

It was THIS Brewery that introduced me to most of the styles I love today. Scotch Ale,Porter,Stout,Black Lager,IPA,Hells,Irish Red and many more. And even after trying and cataloging over 200 beers from 13 different countries since July of 2017, I still hold them in high regard

Went on the brewery tour. Had some samples as part of it. Didn't get to pick them but had a wide array of offers they poured us.overall a cool tour and sampling. This was a few years ago.