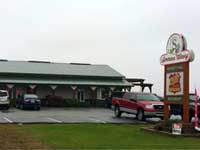 Overall a great place to drink and eat. I will go back if I am in the area.

A winery, brewery, restaurant and banquet hall smack dab in the middle of the corn fields of rural Indiana. Here you'll find the neckbeards gathering from all around, camping out over night--literally, in tents--and propping up their folding chairs to start the line for the can release dropping 12 hours later. Bottle shares fill the time waiting in line for allotment wristbands, and people walk away with cases and cases of fruit puree slushyliciousness.

For all that insanity, it's actually a very well run and organized process, and they have plenty of land and space to accommodate all the cars and people this draws. They allow for a small fire pit, provide porta potties, encourage local fundraising efforts to offer breakfast in the morning, and even bring out a couple cases of their own beer for the shares going on in the parking lot. 450 North are incredible hosts.

The interior of the brewery itself is actually fairly quaint, at least when there's a release, but can hold a fair amount of people. They sling hot pies with an intensely thick, chewy soft dough pocked by nice char bubbles all over. The menu of pizzas is pretty long and the options are pretty varied. One damn slice of a Philly cheesesteak pie filled me up on top of all the slushy beers and fried pickles we had, but it was a nice and tasty gut bomb for the long nap home.

It's a full on restaurant and wine tasting space inside, so if you can be seated at open, you don't have to worry about the mayhem that may or may not be going on outside. Don't let any of that deter you, as this only happens on Friday mornings every couple weeks. If you want to avoid all of this, just check their social media for when they're having a release, and go another day, or even later that day.

They are doing their best to brew what seems like an unbelievable shit ton of beer for what I incorrectly assumed to be a smaller, newer brewery. I mean, they released 8 different cans the day I attended, with very large allotments, and had maybe 12 or so different beers on draft. Not ALL of the draft options were slushys, but most were in order to satisfy the joose-obsessed hoards.

450 North: froot for the people. Making sure we all get our vitamins, one beer geek at a time.

While in Indianapolis in September, I took a side trip to 450 North Brewing. In the middle of corn and soybean fields, it seems as if this place has been here for a while, originally as a winery and restaurant. Now the brewery is churning out tasty NE Style IPA's and Fruity Sours and the crowds are showing up. It seemed like the kitchen was having trouble keeping up with the volume of business the night I was there. Had 4 beers on tap and bought a mixed case and a half of beers to bring home. The beer was very good! The wait staff was attentive and accommodating. No wi-fi (: An interesting trip. Will probably visit again next year.

I admit, walking in I was wondering if I was in the right spot. It’s a combo wine shop and brewpub in the middle of a farmers field. But I have to tell you the beer, food (pizza), and service were great. I was there a few days after the corn maze fest and they had lots of beers on tap and several different hops to go. Their fruited sours were outstanding. Hops good too. Worth a visit!

Pretty relaxed place in the middle of nowhere. Staff are friendly, and food selection is adequate. Good option for a date or a family outing, alike.

A really surprising spot in the middle of absolute nowhere. Just row and row of sweet, Indiana corn. It's connected to a winery, which usually means trouble. Not here. They were really bringing it with the NEIPA's. Two really good ones on. The bartender was really nice and we got to talk a lot about beer, even as he helped other guests. I was the only person who didn't appear to be from the area. That gave it a really local vibe. In a good way. They also put on a beer festival in a giant corn maze. It's worth the trip.

Very cool place with a Columbus address but a few miles outside of the actual town (not far, though). The outside has a wooden covered porch and it has a farm-like vibe with the exterior property. It's a pretty cool place with a very rustic/country vibe going on which I really liked. On the inside, the area is wide open but there's two sections that morph into the same area - winery and brewery, and of course, we were on the brewery side. There was six of us that went and everyone really enjoyed the food and our waitress was just outstanding. We arrived mid-afternoon on the Saturday after Thanksgiving at a time that I would have considered an off time but no ... the place was packed!

Brews tend to be "textbook definitions" of what you'd expect from each style. No weird extremes here, just doing it right. Couple that with a friendly staff, good sandwiches, and the best brick oven pizzas anywhere. It doesn't get any better!

Not a beer drinker? Check out Simmons Winery, their sister establishment, for wines grown from vineyards surrounding the facility.