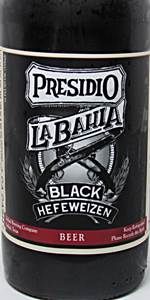 Notes: Presidio La Bahia Black Hefeweizen is our most unique and popular offering named in honor of Texas’ most historic fortress. Traditional hefeweizen aromas greet you with banana and bubblegum. The body takes a complex twist with light roast flavors co-mingling with dark chocolate notes culminating with a spiced clove finish. The flavors are complementary to each other and balanced, and this beer is deceptively light and easy to drink.
View: More Beers
Recent ratings and reviews. | Log in to view more ratings + sorting options.
Ratings by GRVrush2112:

Reviewed by JohnDee from Texas

Reviewed by _drummer_ from China

Reviewed by KingDingus from Texas

2.26/5  rDev -38.3%
look: 3.5 | smell: 2.5 | taste: 2 | feel: 1.5 | overall: 2.5
Interesting idea to be sure, I'm all for twists on classics so I was all ready to enjoy this one. It lacks any noticeable qualities of a hefe, if present they were easily overshadowed by the dark malty characteristics which weren't especially strong either. A shame too, I was hoping for a funky, sweet and spicy hefe complimented by some roasty malt flavors. To the extent that these flavors are present, they're very dim as apposed to bold and deep.

Smell is...well, boring. Malty (kinda) Carmelized banana would be a little too charitable.

Taste is, as specified above, underwellming.

Feel is an over-carbonated fizziness which further distracted my palate from tasting much of anything.

Overall not unenjoyable just a little of a let down for someone looking for bold flavors. Characteristic banana/clove flavors very hard to detect, malt is present but also mild. Not a bad beverage just rather unimpressive to my sensibilities which tend to need very bold flavors to be excited.

A: pours dark brown, near black, with a thin off-white head and minimal sticky lacing. looks like an amber ale going through it's goth phase. (near black, but has reddish orange tinges when the light hits it a certain way)
S: chocolate roasted malt and banana. smoky too, but it's light and lingers in the background. clove in there as well.
T: smoky chocolate malt right off the bat, banana weirdness all over the place, finished by an earthy bitterness. nice clove hints here and there, but especially at the finish. if not for the wheat notes carrying the various flavors throughout I would've never guessed this to be a hefeweizen. I saw another review refer to it as "liquid bbq" and they aren't wrong.
F: silky smooth and full with minimal carbonation.

bottomline (aka personal opinion time):
this is great if (like me) you're a fan of weird brews that deviate from the standard within their style. it's funky, and obviously here to party outside the norm of where casual hefe's hang out. it's not the most accessible beer you'll ever have, but I enjoyed it immensely. this would go great with bbq. in a weird way it's like a more complicated shiner bock, but maybe that's just me.

Reviewed by GregHansen from Texas

Reviewed by AtrumAnimus from Texas

The nose is excellent, There is a nice roasted, smokey nose over sweet malt that is more like a fine porter with floral notes and hints of grass.

The taste is excellent as well. The smokiness that is in the nose coats the palate like liquid BBQ. The sweetness of the malt shines through like a nice weizen should with a finish that is floral and tart at the same time.

Overall, this is an excellent beer that is exceptionally enjoyable and creative at the same time. Definitely buying this one again.