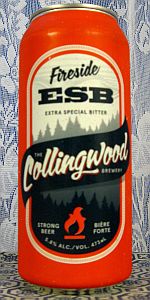 Our award winning Kingpost Extra Special Bitter is inspired by the classic ales of Britain. This perfectly balanced, ruby-hued beer is rich in malt character with hints of toffee and caramel. We brewed this traditional ale to be enjoyed like a proper pint should be: in the company of good friends.

Kingpost ESB is best enjoyed at 6-10 degrees celsius. Pour directly into the centre of a pint glass to encourage a rich, dense head.

Tall can from the LCBO TO.
Pretty good ESB. Pours clear copper, slightly off white head with little retention. ok glass lacing. Malt forward, followed by a fair bitterness, finishing a little on the sweet side. Not Collingwood Brewery's best beer, but decent take on ESB, very drinkable.

Appearance: A ruby hued, mildly cloudy body that boasts mild but steady carbonation and manageed to produce a finger of head that di manage to lace, but didn't stick around very long.

Smell: Mild caramel malt with a hint of brown sugar edge out grassy and herbal hops. There is a slight stone fruit note in the background but it's hard to make out. This beer benefits from warming as the sweeter aspects tend to come out,

Taste: Very much mimics the nose, as it starts with sweet caramel malt with a slight sugary note and then turns to a sweet fruit taste as stone fruit, berries and a slight woodsy note briefly appear before a dusting of grassy and earthy hops takes over.

Mouthfeel: The transitioning of this one I didn't like very much, it seems to quickly give into the bitter end. The carbonation is fairly even across the board, The hop note leaves a bit of a dryness to the experience that I don't like and the aftertaste is a bit of a mixed bag.

Drinkability: Easy enough to drink, very light, especially for something with that high ABV. Settles down easy and a good beer to savour. The dry notes hamstring it a bit, but all in all a good fall and winter drinker.

Final Thoughts: A ESB worth a shot, I can see this being ideal with mussels from the pub or a meat pie. It certainly lends itself to being drank in the colder months though, as a bastion of refreshment it is not. All in all a solid offering, so I'd say give it a whirl.

Can - pours a clear copper-red color with virtually no cap. Aroma is caramel malts, some sweetness and grassiness. mouth feels is fluid, thin - has malt character - one dimensional..... Flavor has malts in front with just enough hop bittering t balance, big caramel tones and light herbal grassy notes - fast wet finish --- clean but uneventful - the first let down I have experienced from this brewer.

The beer has a thick beige head.

The colour of the beer is dark brown with hints of red.

The smell is malted barley, toffee, and brown bread.

The taste is similar to the smell. This beer is malt forward in a rich and delicious way. There is a slight bitterness throughout the beer that is nice.

The body is medium and the finish is a bit wet and chewy.

Coppery colour, moderate head to persistent film, spotty lace. Malty sweet up front and then immediately bitter, enjoyably pleasant transition. Nicely done as the sweetness is not overbearing. Nicely hopped, lingering bitterness. Simple and tasty and well made. Worth a try.

Note: it appears to have been re-branded as Kingpost ESB. Identical packaging except for new name and image of crown replacing image of flame.

Got this one at the LCBO this past summer.

APPEARANCE: Pours a 1+ finger, medium looking, slightly foamy off-white head with good retention. Clear burnt orange in color with some carbonation evident. Head fades to a full cap and clings to the sides of the glass. A ring and splotchy wisp remain leaving decent lacing down the glass as it empties.

TASTE: Caramel and toffee sweetness up front. Light butterscotch at the swallow with earthy and grassy hop notes as well. A medium and lingering finish with sweet caramel and toffee and some earthy hop bitterness.

OVERALL: This is solid stuff. A touch too bitter perhaps, and the sweet malt profile could come out better in the flavor, but it’s still good all around. The nose is the best part of the beer, now if only the flavor could follow suit. Give this one a chance if you see it. Recommended.

Not much to look at as it fills your glass with a copper brown liquid, the head dissipates almost instantly. This beer really doesn't have a much of a nose, a general hop aroma with a twinge of sweetness. The flavour redeems this one a bit, I found the presence of caramel sweetness is nicely offsite by a bitter bite in the finish. This became much more present as the beer warmed. Went down smooth, bordering on creamy, which is aided by the fact that there is almost zero carbonation.

A decent take on an ESB, glad to have tried it but won't search it out.

Look: The beer has a deep transparent copper body of nearly 18 SRM units. It produces a one-finger white head. There is hardly any carbonation. This is why the head dies and ends up being a ring, which is acceptable for an ESB.

Smell: Nothing particular. Moderate hop aroma that hints at a beer that will taste like bread and grains.

Taste: Moderate bitterness from the hops as the malt, which confers a hint of caramel, is in the background. The flavor is a replay of the nose.

Feel: Medium-body, slightly dry and clean feeling. There is no trace of carbonation in the beer and there is a mild warmth from the alcohol.

Overall: This a very textbook ESB. I love it, because the brewers behind this beer didn't go nuts with the malt as do some North American microbreweries.

Pours relatively flat, like traditional English ESB, has a very strong hop presence for an ESB, but also a very rich caramel flavour. One of the best Canadian ESBs I've had. Strongly recommend

Purchased at the LCBO for around the $3.00 mark for at 473ml can. Served at 7deg C in a draught glass

A- Opens well and pours a tiny head is gone within a minute. Dark gold/slight brown colour and filtered clear.

S- Not much here.

T- Light bittering hops. Not a big bodied bitter but has some nice bitterness to it. Enjoyably light and refreshing for a bitter. Decent complexity and not overpowering on any front. Like the heavy malt on this brew and the caramel notes come through at the end.

O- Very enjoyable and a break from the everyday. Will buy again.

This nice little brew went well with...... Roasted marshmallows over the fire with caramel glazing.

Pours medium mahogany colour with a thin head that dissipates quickly. Smell isn’t strong but a bit of booze is present. Taste is malty as well as bitter. Slightly sweet, and the alcohol is very present. Although not horribly high in alcohol, it makes itself known. Overall not bad.
May 28 2020

Tried this on draft In Toronto, excellent. Clearly a British style of ale with a grainy, toffee or caramel undertone. Good floral hops.

The malt base isn't quite like the best English beers - it's not as rich or as integrated, but still very good. If I was brewery I'd work a bit on the mash for this beer. They are in the right direction but getting a more English malt texture and flavor would make the beer superlative.

I've tried the canned one but the draft was much better.

473 ml can served at cellar temperature into a tulip. I see from other reviews that I'm not the only one enjoying this ESB on this warm but wet evening in Southern Ontario. Date on the bottom of the can is December 02, 2015. If this is bottled date then this beer is super fresh, if it's enjoy by date, then its on the stale side.I only purchased this 3 or 4 days ago.

Appearance - Pours a clear, coppery colored brew, with minimal visible carbonation and a decadent finger and a half of resilient head. Retention is good and some spidery lacing pops on the side of the glass. So far so good.

Smell - The nose is initially a musty aroma, transitioning to a coarse graininess. Small vegetative note and some light fruity aromas linger in the background. some herbal notes eventually make their way into play.

Mouthfeel - Smooth with good carbonation and a dry finish but juicy body throughout.Overall body is moderate.

Overall - Not a bad, but to me an entirely forgettable ESB as the nose seems stale with grain and the flavors don't exact deviate from that profile. Certainly worth picking up a can for around $3 CDN, but not blown away by this either. I may have to investigate the canning code at the bottom of the can attempt to find a fresher sample as that may make all the difference.

Tallboy can from the LCBO; packaged Oct 30 2015 and served slightly chilled.

Pours a clear reddish-amber colour, giving rise to one finger of frothy, off-white-tinged head. It fades steadily over the next handful of minutes, leaving behind a lovely foamy collar and thin cap, in addition to an attractive swath of lacing. Fairly typical English pale ale notes on the nose - caramel and toffee sweetness, biscuity malts, maybe some toasted nuts. This is in addition to some underlying hints of plum, sultana raisin and some subtle, tea-leafy hoppage. No complaints thus far.

Pretty solid stuff. Bready, biscuity malts, along with some restrained toffee/caramelized sugar sweetness, comprise much of the initial flavour profile. Suggestions of toasted nuts and dark orchard fruits intensify by mid-sip, with the finish consisting of some leafy, weakly earthy hop bitterness, accompanied by a toasted malt quality that lingers on into the bittersweet, persistent aftertaste. Medium in body, with low carbonation levels that gently agitate the palate, and a smooth, soft, satisfying mouthfeel. Well-crafted and very easy to drink; a superb English-style ale.

Final Grade: 4.03, an A-. ESBs are one beer category where I am convinced that the domestic offerings are almost universally inferior to the imported, often-cheaper British equivalents. However, Collingwood's Fireside ESB is one that I would actually be willing to occasionally purchase over affordable alternatives such as Wells Bombardier or Lancaster Bomber. The 40 IBUs do not translate into all that much bitterness, which is my only complaint about the beer as a whole. Recommended as a safe, worthwhile selection for fans of British-style ales.

This is a fantastic local canned ESB. Very well balanced with fantastic malt and hop flavors balanced perfectly. A very traditional, true to style example. I will seek it out again.

Kingpost ESB from The Collingwood Brewery
Beer rating: 84 out of 100 with 39 ratings