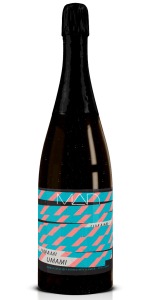 Appearance: Straw yellow with a slight haze and a a white head that dissipates quite quickly
Aroma: Some noble hop character with a slight grassiness and minerality
Taste: At first, a subtle briny character greets you and then builds into a more pronounced salinity. On the finish is where more character comes through with some fruitiness but also a bit of oxidative sweetness
Mouthfeel: Medium-light mouthfeel with a medium-high carbonation that leaves a hint of residual sugar on your tongue
Overall: A very interesting beer with several flavor components that neither work together or contrast each other, rather they exist as different stages of te beer.

Served cold into a pilsner glass. Expectations are above average; Mikkel is one of my favourite brewers, but he doesn't often do lighter beers well.

HEAD: ~6 inches, occupying ~85% of the glass. Frothy and foamy, with heavy thickness for a pilsner. Creamy and full. Leaves inconsistent uneven lacing on the sides of the glass as it recedes. Long-lasting; this easily retains for 10 minutes.

BODY: Clear yellow. Darker than a typical traditional pilsner. Not as clean as you'd expect either; there's some visible floating sediment. I guess seaweed is tough to filter.

AROMA: Grassy noble hops, pilsner malts, some clean grains/barley, and minerally water. I don't find any overt seaweed notes, but when I really search I do find some brininess and maybe some faint salt.

It's a muted aroma of average strength.

TASTE: The pilsner malt backbone integrates the briny salty seaweed notes nicely, and yes - I'd say this succeeds at being more savory/umami than most beers. But it's also overhopped, with too much grassy Noble hop character and floral character oppressing the malty sweetness with bitterness. The third act is oddly buttery, suggestive perhaps of diacetyl off-character. While I do like this, its shallowness and simplicity holds it back.

TEXTURE: Lacks the clean presentation of flavour featured in the best pilsners. Multiple decoction would likely help with that, but I don't suspect its use. Crisp and medium-bodied. Should be lighter on the palate and more refreshing.

It's a decent companion to the taste.

OVERALL: There's not quite a harmony of texture to taste, and the beer isn't gestalt. The cohesive flavour profile leaves much to be desired in terms of intricacy and subtlety of execution, but it's highly drinkable. That said, a pilsner should be insanely drinkable and even more balanced; this fails in that regard. Likable stuff, but not worth its high pricetag (courtesy of the Shelton Bastards). Some might call it a gimmick beer, but there's talent behind it.

i have loved this whole series, and am now just missing the salt version, but this is a fun pilsener beer, not sure how much seaweed i really taste in it, but i think its really well done nevertheless. slightly darker in color than others, not so yellow as it is brass hued, with a glorious airy rising white head of large bubbles hanging out the whole drink. vigorous carbonation is evident, and that is one of the beers best features. pils malt all the way in the aroma, with just a little bit more caramel than normal, giving depth. the seaweed impact may add some bitterness in the place of hops, maybe a minerality short of briny in the taste. fresh grain is nice here, and there doesnt seem to be much hops either, but its a well layered brew with a lot to offer, and i feel like it needs a context, maybe a plate of sushi or something to bring out its full potential, but we enjoyed it in isolation. the quality is impeccable, like most mikkeller stuff, so it was a treat, but i wanted something challenging and weird, and this certainly isnt that. not that i would change it much...

Golden, a tiny bit cloudy, two finger fluffy white head that recedes to a full finger and then it slows down.
Smell of grain, biscuit, salted grain, a gose-like acidity, apple peel, lemon, grass, cheese mold, spicy hop, faint butterscotch.
There's that nice weird "umami" popping in the taste, a meaty-salty glutamate-induced savoriness. Easy to detect seaweed too, enhanced with funky grass and crunchy herbs. Hops bring in some fruit too, light melon, apple, apricot, hinting some honey with the sweetish malts. Which brings another "problem", a certain buttery note from the malt, like diacetyl, not my cup of tea. Spicy hop finish, intense, salty, begging you to hydrate again. With more MAD Umami eventually.
Light to medium bodied, but buttery, medium carbonation. Hoppy and salty aftertaste, faint grain.
Thumbs up for that extra tastiness, turned a few degrees downwards by the buttery malts. Tons of spicy hops are a plus here too, in the end. A beer to remember.

Label describes it as a pilsner-style beer brewed with seaweed. My first from the oddball food beers MADe by MAD. 750ml split.

Appearance - Hey, it's not green! jk lolz. It is pale orange though. White head retains well, bits of lace left.

Overall - Interesting experiment, I wound up liking this the more I drank it, but not the hugest fan of the seaweed/scotch like flavors and not sure it meshed well with a hoppy pils. That being said, not bad.

Pours a clear gold with a foamy bone head that settles to a small cap on top of the beer. Foamy swaths of lace form around the glass on the drink down. Smell is of malt, grain, fruit, and grass aromas. Taste is much the same with sweet fruit and grass flavors on the finish. There is a mild amount of hop bitterness on the palate with each sip. This beer has a lower level of carbonation with a slightly crisp mouthfeel. Overall, this is a pretty good beer that is tasty and easy to drink.