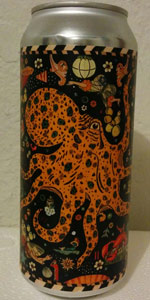 On tap at FR. This is the Lotus hop version, not sure if a new variant or just a formal naming of a previously experimental hop. Look is pale orange and opaque. Smell is juice, orange and grapefruit. Taste brings all the fruit, a true hazy juice bomb. Feel is soft and creamy, abv completely hidden. Overall an excellent example of the hazy juice bomb.

16oz can dated 04/15/19, pouted into a pint glass shows a hazy, pastel yellow that glows with an orange tint when backlit. Floating on top is a tall tightly bubbled head of white foam that lasts and leaves an almost geometric wall of lacing behind.

Aroma is all fruit juice, mostly pineapple, but with hints of orange, grapefruit, and mango but the vanilla underlaying is obvious.

Flavors match the aroma with no onion. Just juice and smooth vanilla to mask the bitterness.

Overall has to be my favorite version of a style I don't fully appreciate, understand, or prefer.

L:. Pours a hazy yellow orange with a medium foamy white head and no lacing on the glass.

S:. Sweet lemon candy, notes of orange and pineapple, lots of candied fruit, a slight grassiness, a hint of vanilla.

T:. Candied orange, lemon, and pineapple, a light bitterness and a hint of vanilla. Quite sweet but not cloyingly sweet.

O:. This is a sweet IPA but still quite good.

A: This New England Imperial IPA (or "Juicy or Hazy Imperial or Double India Pale Ale," according to the newly released Brewers Association's 2018 Beer Style Guidelines) from one of the leaders of the style in Chicago pours a vibrant orange, very hazy, with reddish highlights, like an orange juice with a touch of ruby red grapefruit juice mixed in. The tightly-packed pure white head settles nicely from an easy two fingers to a soft meringue-esque texture. Lacing is excellent, and retention is above-average. This is pretty much the quintessential look of the style, and it stops just short of the complete opacity and murkiness that some of the more extreme examples of the style showcase. 4.75/5

A: True to appearance, orange juice is the first thing that comes to mind when analyzing the smell of this beer. Of course, there is plenty of tropical accents in the form of passionfruit, pineapple, grapefruit, mango, and papaya. Some Mosaic blueberry sneaks in when it can. A bit of rindy bitterness and a little greenery add some slight bit of further complexity. Very, very light sweet and creamy malts and grains lie under the tropical waves alongside a light yeastiness, masked almost entirely. Alcohol sneaks in, sadly, as the beer warms. There is a great variety of hop flavors on display here, and it nails the juice-foward nature of these beers. 4.25/5

T: Right up front, loads of passionfruit, papaya, mango, orange, and pineapple are already at full volume, though, early in the beer, they are actually cast aside rather quickly by an unexpected wave of bitterness, both pithy and raw greenery, almost medicinally so. As the beer is consumed, that bitterness becomes less and less noticeable, but the first few sips are a little shocking. That is not the only flaw in this beer in a style that should have little to no bitterness: toward the middle/back-end of the palate, a pink bubblegum flavor lurks; it is not easy to pick out, but there is no doubt that it is there along with its characteristic chalkiness. It is not all bad, however, with the beautiful tropical fruit flavors mentioned above dominating the flavor for the most part, so much so that it has a real citric twang (not like infection at all, however). The bitterness, while subdued by familiarity, is still there, albeit now in a much more pleasant capacity, more traditional generic hoppy bitterness and even a little dankness. The malt is quite sugar cookie-sweet (even some vanilla sweetness comes through), so that bitterness is actually very necessary for a properly balanced beer, though even after getting used to it, it is still rather high for the style. 3.5/5

M: Forbidden Root really has the mouthfeel of these New England-style hopppy beers down pat. This is full, creamy, velvety smooth, and, in a word, luxurious. Carbonation is soft with an almost "micro-prickliness" that is absolutely perfect for this beer. Unfortunately, that rather high bitterness hurts things here slightly with some astringency, and the bitterness ironically does not play well with the twang also caused by the hops. Alcohol heat is barely perceptible, which is well-done at a hefty 8.2%. The finish is moderately dry, edging into quite dry. Drinkability remains farily low, though, just due to the intensity of the flavors, which can hardly be called a fault. With just a little bit less perceptible bitterness, this would be totally perfect. 4.5/5

O: This is the first review that I have done now that style guidelines for New England-style hoppy beers exist in a proper form. I am not sure I agree with the vagueness of the Brewers Association guidelines, but New England-style beers are quite variable. This beer does not quite fit in to those guidelines. That said, as I have said many times in the past, I very much prefer those New England beers with higher bitterness e.g. Trillium as opposed to Tree House. This one is a little weird because there really is quite a bit of sweetness, and the bitterness does not so much combat it as follow it up and clean the palate up for the next sip, not unlike a very roasty high ABV imperial stout. This is an aggressive, delicious beer, and Forbidden Root continues to cement itself as one of the best "Hazy India Pale Ale" brewers in the whole of the Midwest, not just Chicago; for evidence, look no further than my favored New England beers of theirs: Toro, Atomic Child, Piccolo, Snoochie Boochies, Radio Swan, Night Moth, Power Trip, and, of course, Stay Lit, and the fact that that makes Ghost Tropic my least favorite of their New England offerings makes them a special brewery indeed. Pair with The Dillinger Escape Plan's "Ire Works," the weakest offering from a brilliant band incapable of an actually poor album. 4.25/5

12 oz serving tasted in a snifter from draft at Forbidden Root Restaurant and Brewery on July 22, 2017. Tasted in a Spiegelau IPA glass from a one pint can on March 20, 2018. NE style double IPA. Juicy body with waves of pineapple and a canned peach finish. Highly recommended.