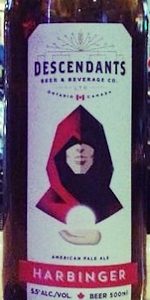 On tap @ Bent Elbow many times - recently from a growler filled at the brewery - pours a clear orange-gold with a tight 2 finger frothy white cap which reduces to a surface lace ....light floral aroma over pungent grains - flavor is sharp and balanced between chewy malts and piney resinous hops - finishes clean with the bittering becoming dominant--bitter finish.... one word: "serviceable"......this is a good APA with no out of the ordinary traits , just straight up ’OK’ sessioner

473 mL shrink-labelled can from the LCBO; best before Aug 6 2015. These guys have been active on the beerfest circuit for a while now (and I recall trying a sample of this particular beer before), but it's definitely great to see one of their brews finally appearing in local stores. Served slightly chilled.

Pours a bright, clear golden-amber hue, producing an inch of fluffy, eggshell-white froth. It seeps away rather slowly, lasting just over five minutes until it is eventually reduced to a thin cap and a wide, foamy collar. Lots of beautiful, arcing swaths of lacing, too - looks good to me. Lots of caramel and butterscotch on the nose - it comes off rather malt-forward, with bready/biscuity notes leading while a lighter tangerine citrus note loiters in the background.

A well-balanced, properly drinkable sort of pale ale. Bready malts and some mild biscuity notes are accompanied by a pronounced caramel sweetness. Some butterscotch is also detectable, but Cascade hops sweep in soon after to counterbalance the malt bill. At that point it becomes somewhat floral, with notes of orangepeel that fade into a grapefruit pith bitterness by the time you reach the finish. Vaguely dirty aftertaste that lingers on the palate; the noticeable astringency on this one won't shock craft beer veterans, but proves sufficient otherwise. The mouthfeel is soft, with a body on the lighter side of medium. It's quite easy to drink, and at 5.5% it just barely meets the definition of sessionable, at least in my judgement.

Final Grade: 3.65, a serviceable B. Harbinger is not the most remarkable of APAs on the market, but I'm still enjoying my glass of it. This is a very competitive category of beer, with countless other craft-brewed pale ales available at any decent-sized LCBO - but as someone who tends to rotate through a large number of stand-bys and old favourites, I can see myself returning to this again at some point. I'd say it's worth a shot, but don't expect miracles.

cyrenaica from Canada (ON)

Got this one at the LCBO in the Loo this past summer.

From a can into a snifter

APPEARANCE: Pours a small, one finger, medium looking, creamy white head with good retention. Perfectly clear safety orange with no carbonation evident. Head fades to a full wisp and clings to the sides of the glass. A half splotchy wisp remains leaving dots of lacing as the glass empties.

TASTE: Pale malts, light caramel with some melon sweetness up front, then a dose of tropical fruits at the swallow. A medium but lingering finish of caramel sweetness, some piney bitterness, some citrus and other fruity flavors as well. Really nice stuff here.

PALATE: Medium body and slightly higher levels of carbonation. A bit creamy on the palate, though a touch foamy, goes down fine and finishes a bit dry. A touch light perhaps and a bit foamier than hoped.

OVERALL: This is good stuff and is solidly balanced. The feel could be a bit less foamy, but it's not a huge distraction. The flavor and aroma are there, and with a bit better engineering, this would be even better. Give it a chance if you see it. Cheers!

Pours a bright and clear golden. Minimal head and lacing. The smell is really tame. Malts and grains with a slight hint of hops. Honestly, it smells like a macro beer. The taste is much like the smell, with not a lot of hops presence, lots of grains and malt though. There is medium carbonation, a medium feel.

To call this middle of the road would be a stretch. It's a little less than that. I like to support craft in my province, but these guys need to pick it up to get my interest.