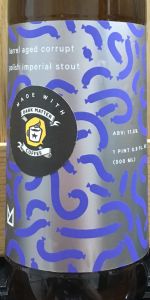 It pours a very dark brown, approaching black, with a finger-and-a-half of soupy, dark khaki head. It eventually settles into a thick crown that leaves almost no lacing.

Light smoke and umami stand out in the aroma, with hints of vanilla, hazelnut, toffee, cherry and bourbon behind. A ton of depth here.

Again, it has some umami and light smoke up front in the taste; nothing over the top, though. Bourbon and some light, bitter coffee show on the backend. There's a definite cherry note again, but marshmallow and a little cocoa seem to replace most of the hazelnut, toffee and vanilla from the nose.

It's medium bodied and slightly oily with moderately high carbonation.

Honestly, I'd been skeptical about this one given the kielbasa-like things on the "Polish Imperial Stout" label, but this is pretty tasty. The bourbon and coffee are both very light, but there's a surprising amount of depth in here. 02/22/17 bottling date.

Batch 318
Dark brown pour, looks black in the glass. Thin layer of tan foam.
Aroma is odd, umami and licorice, crayons. Where's the advertised coffee?
Full bodied, fairly chewy and heavy as an imperial stout, body is true to style at least.
Taste is heavy on licorice, not really a fan. Not getting any "barrel", slight coffee aftertaste.
Heavy presence of autolysed yeast, lending weird umami notes of soy sauce.
Not a big fan of this, doesn't really taste barrel-aged or have much discernible coffee.
Couldn't finish it and dumped about half the bottle.

Pours very dark brown and sits midnight black in the glass with a frothy two finger head of brown foam that dissipates slowly over time.

The coffee takes over and dominates in flavor, which is fantastic by the way, while the chocolate and oak take a back seat, but lend nice complexity.

Overall, this brew has huge coffee flavor and aroma and goes down super easy at 12%.

Kind of a strange bottle. The beer pours a dark cola brown body, slightly muddy looking, one finger white head, not much retention or lacing. Smell is a bit of bourbon, a bit of salt, light chocolate, dark fruit presumably from coffee, umami and anise. Flavour follows the smell, the coffee itself seems to be more of an astringent dark fruit type, touch of licorice and anise. Not my most favourite, but it's not on the level of off-flavours either. Just not my cup of stout. Mouthfeel is medium lighter bodied, slightly low carbonation, smooth and sippable.

Bought from a local liquor store. Drank out of a Transient Artisan Ales teku.

A 'barrel aged polish imperial stout with coffee' - what is a 'polish' imperial stout I asked myself, picking up this beer. Well - if it is anything to do with the deep, dark and almost smoky rich malt profile then that makes sense. Slick pour with a lively, pillowy tan head which has plenty of life in it, almost coffee crema style. Whiff of drip coffee on the nose.

Feel is full and sticky, with a real tongue coating coming out of it. The strong coffee notes allow in some dried fruit and rye bread on the back end. Lots of layers here, quite a blend.

A fine BA stout from a brewery that keeps knocking it out of the park here in Chicago.

A solid example of the style. However, the roasted malt in this beer is absolutely phenomenal. The nose smells of char, dark fruit, and a hint of vanilla from barrel. The Initial taste follows suit of what I picked up in the nose, strong taste of dark fruit and char. Middle taste all booze and vanilla, and it really coats your mouth. But the back taste is truly great. Roasted malt comes in delicious at the finish and I swear I taste coffee.

Smell has notes of roasted malts, a touch of smoke and some sweetness on the nose. Then there is the coffee which is not as forward as you might expect but it does permeate the aroma. No bourbon and barrel notes at all.

Taste has some roasted malts with a mild smokiness, touch of chocolate. Notes of coffee, a tad acidic, comes through strongly. Touch of bittering hops on the back end. There just isn't much either in bourbon or barrel character in this. Outside of some vanilla, I wouldn't know this was barrel aged if I wasn't told. Touch of heat on the back end lingering to the finish.

Overall this is a solid beer. The base stout is pretty well done and tasty. However, it doesn't taste like it was barrel aged at all.