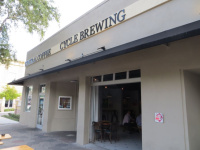 My wife and I stopped here to check out this brewery. The place is a storefront setting in an downtown area along a block with many restaurants, gift shops, etc. Curb parking is all that I saw nearby. As with many of the neighbors, the brewery has some sidewalk seating. A long bar runs the depth of the pub, and the brewing equipment is at the far end. The interior vibe is what I'll call 'eclectic artsy' with its various kinds of hanging wall art.

The brewery is well known for its imperial stouts but we didn't want to drink much of it with its high abv so we chose the Pils and the Vienna Lager (they don't offer sampler flights, so half-pours were our choice). The Pils and Lager were good, but the Cocoa Nibs Stout was outstanding. I wish we could have chosen other stouts to try (12 BA stouts were available), but the abv was just too much for us.

It's an experience to visit here to try their big stouts, but without an option for sampler sized pours, it's impossible to fully enjoy their offerings. A visit to anyone is highly recommended.

Since this brewery had a fairly high rating, I went there today. Let's just say: if you are a craft brewery lover on a limited time visit to the Tampa-St. Pete area, you'll probably want to skip it.
1) Not being local, I had no idea what Central St was like. Hence, you get a lot of people coming here who really aren't beer drinkers...it's just a convenient spot to sit outside and talk before your next stop. So, just because you see a crowd, doesn't mean it's good.
2) Beers: Tried a pint of their session "Fixie" which reminded me of the session ales that were coming out 3 to 4 years ago; basically trying to hop up the beer with no real thought to the overall flavor. Next, I tried their standard IPA and it was literally forgettable...don't know what else to say.
3) "Presentation": Ok, I get it. You can take beers outside across the public sidewalk and into Cycle's drinking area. So, the containers need to be plastic (maybe they would be close to 16 ounces if they topped them to overflowing, but they were not doing that to anyone's beers) But, again, for a craft beer lover, you might ask: "Would you like a glass container or a plastic one? The glass ones are a full pint. The plastic ones are...." I may have opted for the glass (if that was even an option; I don't know; no one said anything) and sat inside with the two locals who appeared to be there.
4) Staffing: During the entire time when I drank 2 pints, and watched a lot of other groups come and go, I never saw any staff come out and ask if anyone needed anything! After about 45 minutes, a guy did come out to collect the empty plastic cups; did not see him take any new orders.

On the plus side: if you are craving a stout, they did have several available; seems to be their strong suit.

So, this is nothing like going to a brewery taproom, if that's what you had in mind. If you want a place to grab a decent brew while you're touring Central, then go for it. Otherwise, save your time for one of the other actual taprooms.

1 TV on the wall for the sports fan, punk rock music on the stereo, and a whole board of BA stouts that all start at 12% (6 total). They have patio and inside seating, local art for sale, and shots of Jameson for the non beer lover. Bombers and crawlers and shirt plus stickers and a bunch of cool murals to buil the atmosphere even more. Very chill space to drink. Go there and have some fun in the sun of St. Pete.

From notes; visited end of 2019.
Stopped while on Tampa business trip. Pretty nondescript shop, but awesome beers to drink on site; great take home bottles.
Service was good; knowledgeable and willing to chat.
Glad I finally made it.

Cycle Brewing is pretty much a staple in the Downtown Saint Petersburg Area. Nestled in a humble little section of Central, Cycle has always enjoyed a moderately sized but extremely loyal following. Cycle was one of the first real brew pubs, you see, at least those native to this area. Their offerings are always well made and served in the proper glassware at the proper temperature. Occasionally, the staff can be somewhat lackadaisical in their approach. However, that more or less embodies the mannerism of the area. They are in no rush and, if you're here with them, you shouldn't be either.

Through no fault of their own, the area has become less of the artistic venue it once was and more so commercial. Thus, due mostly in part to gentrification, the surroundings have lost some of their former luster. Regardless, this modification has taken absolutely no toll on the product, just the vibe. If you're ever in the area, and want a great stout, walk up to the bar and say those magic four words.. "Cream and Sugar, please!"

We were there early on a Sunday afternoon, not too crowded at all. We sat at the bar and they had a great selection of BA beers and bottles to go. A group of 4 of us each had 2 and I took a bottle to go. Steve, the bartender was cool, no issues with service. We'll be back again.

Went on a not-so-busy early Saturday afternoon and the place was only at mid-capacity. Enjoyed sitting at the back bar, although there was a somewhat musty smell for some reason. Didn't wait long at all for drinks and the bartenders were nice, but couldn't shake the feeling that they would rather talk to their buddies than us. Oh well. Beer selection was good, although pretty much the choices were IPAs and sweet stouts. I like both so no issues for me.

Well regarded place in old St Pete. Everything I read said that I needed to visit. Open air vibe, kind of bike vibr, many sweet beers, had one but not memorable. I guess sweet beers aren't my thing. Good service. Good place to watch people walk by

Snobbish feel overall, the server was stand-offish, and we felt we were intruding on her domain. We had a few 4 oz pours and decided we had to have their Cream And Sugar Hazelnut, so we bought two crowlers and hit the road.

Vibe: I visited this place around 12:30 pm on a Sunday afternoon, just after it opened. It wasn't overly crowded and there were a few people sitting on picnic tables out on the sidewalk. There were lots of areas to sit inside among a couple of high top tables in the front, some small tables in alcoves along the wall running down the length of the building, and lots of seats at the bar.

Quality: Beers were served at the proper temperature using a variety of glassware (snifters and pint glasses).

Service: It wasn't very crowded when I was there, so there was never a wait to get beers at the bar.

Came on a busy day and the bartender was still so patient and took her time with each and every customer. Felt like a regular right off the bat! Fantastic brews and can't complain about the crowlers!

Small and intimate, this is a great place to stop for a couple of great beers. After inquiring why they don't serve flights, the bartender stated that they'd rather have people sit and enjoy a beer, rather than taste a bunch of stuff, take notes/update apps, and ruin taste buds so that the next beer can't be graded accordingly. Makes some sense. I've read that the employees can be short, but I found them to be polite, friendly, and willing to talk. I'd definitely go again.

I found myself at Cycle about a week after Tampa beer week - which was both great, and not. It seemed that a lot of the local beer nerds were over it and ready for a couple of weeks off - crowds were fairly subdued and not doing serious chugging or anything, which was perfectly to my liking.

Cycle happened to be my first stop that day - being a Sunday, parking was slightly easier to come by, but plan on paying for parking. It's just not that likely that you'll find a free spot - and trust me, Florida meter enforcement is a lot more serious than the cops are about speed limits.

Cycle offers a bit of outdoor seating (shared with the neighboring businesses) - a few picnic tables, and the sidewalk area is smoking-friendly. Indoors feels surprisingly cool for some reason. The doors were wide open that day and there was no evidence of AC running, so I'm not sure what the story is. It's just nice and cool. Being a Minnesota native, this was totally fine with me (though my FL buddies were all quite cold and complained a lot...). The tap selection looks quite mediocre... but take note, there are two banks of taps: one focused on barrel-aged beers, and another on your more standard fare. I'm reluctantly calling it "standard" because even the berliner weisses made me very happy. Note that the BA taps are 2 per person only, but - there were several BA stouts on their to-go list. Don't lose hope! You'll try all kinds of amazing stuff.

Glassware was lovely. The atmosphere was friendly. The space is nice and accommodating of all sorts of drinkers. The taps are terrific. Cycle is well-worth the stop - it's one of my top 5 stops and brewery picks in Florida. I don't like the location, but it's still fantastic - take that with a grain of salt, as Cycle is very convenient for drinking and then finding some lunch or sobering up with a walk around the area... or walking over to Green Bench. Exactly what I did!