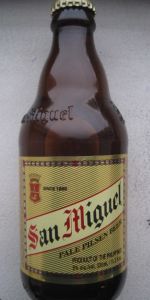 330ml bottle, can't see a date on it. Poured into a tulip.
Look: Very clear gold, about .5 cm of bubbly white head falls back to nothing much very quickly.
Smell: A little honey, maybe a little corn and grain, a touch of grassy hop. Pleasant if a little plain,
Taste: A little grainy, a touch of grass and something a little metallic in there as well.
Feel: It's a little thin and watery, only a touch of carbonation on the back of the palate. Dry finish.

Clear gold with barely any head. Pils malt on the nose, with a hint of earthiness. A little cherry. Flavor has caramel, I feel confident in saying this is quite oxidized. No date. Has a little bitterness and comes across as sweet from the oxidation. Decent carbonation, dont know why the head was so pathetic with a regular poor.

C'mon, we gotta get this rating up, at least a little, if for nothing else so that the ratings on this site are reliable. Yeah, it's certainly no great shakes, but there's *no way* in any kind of sensible ratings system it ranks lower than freakin' Sapporo P.! Have you actually ever tasted that? Only *possible* use for it other than to clear out your drain is as an emetic (for those of you not in the medical trade, that's a vomit-inducer...)
Also, in Manila, 50 cents for a S. Mig, 1.00 for a Coke, 1.50 for a bottled water. Trust me, when you're in Manila those are the only choices that aren't going to give you the runs for a month so, duh!!

i'm generally an real ale drinker, but in indonesia this pilsner stlye saved the day. med carbonation, light but rounded mouth feel, slightly more yeasty than some, with a little more of a bitter finish that i like. compared to the awful chemical cocktail "bintang", this was happiness in a glass. and i learned the history off its beginnings in manila....

Purchased in a stubby style bottle with graphics screen printed direct to bottle - nice old school feel. Color is light gold with a med. high carbonation. Aroma is malty and sweet with an odd fruity citrus smell going on, mouthfeel is light with a some coating on the tongue. The finish has a slight hop bite which is in line with style. Taste in general is crisp, light, more bitter than American style pilsners with some odd citrus notes so if you had to grab a Bud or a San Miguel I'd go with the later.

Average beer. Wanted something cold and that would provide a buzz but without being heavy. This beer is Highly drinkable, however it is completely unremarkable.

Pours a clear golden color, smell was rice,corn,grassy lemon. Taste followed nose but with a stale musty after taste. Mouth feel was crisp with high carbonation. Had this one at a new fusion/asian restaurant ,not one to seek out.

Very similar to other light beers but its redeeming quality being sweet aftertaste and decent mouthfeel. I might pick this if a bar doesn't have anything interesting or i just want something easy to drink.

Oddly been liking this style of pilsners like this and Baltiki 7 lately (Taj Mahal if my memory is right) i have had a hard run of high alcohol hoppy beers lately maybe that is just it.

Honestly I wasn't expecting much from this beer. Got a six pack from a co-worker. I have to say I was little surprised. It's certainly not the best beer I've had but this is a perfectly acceptable beer and a good representation of the style. It's a light, crisp beer that's easy to drink.

Decanted from an 11.2 oz bottle into a conical pint glass; no production data.
A: Pours a perfectly clear, pale golden color with robust carbonation, leading to an at least one inch head, but little head retention and no lacing.
S: Aroma mostly cracked grain than baked bread, with a little herbal/grassy.
T: Palate follows nose, with the grain end of flavor predominating. Lightly bitter with a little bitter aftertaste.
M: Light bodied with solid carbonation. Fairly refreshing.
O: This was a reasonable example of the Pilsener style. If we are comparing this to other Pilseners, it's actually a pretty well made one. I also appreciate that it is placed in brown bottles, as, despite being imported from the other side of the world, it drinks fresh and unskunked.

Look: It pours light golden with a white head It has moderate head retention with some lacing.

Smell: It has grainy sweet aroma with some herbal and grass as well.

Taste: The flavors are dominated by a malty, grainy sweetness. There are some grassy elements with herbal flavors as well.

Feel: It has a moderately light body with moderately low bitterness. The aftertaste is grainy sweet.

Overall, it is a lager with mostly malty aromas and flavors, but not without some hops that are noticeable.

Looks like a pilsener. Head is more pillowy than american adjunct lagers that I’m used to, but still soapy enough to dwindle to a thin layer as I type this.

Smell is a cross between coors and corona. That beery macro smell with an extra hint of skunk sweetness.

L: Packaging in the PH looks great and rustic; the glass bottles give off a familiar and cozy feel. Beer itself is light golden in color, very clear and has quite an amount carbonation.

S: You'll notice a very sweet , almost floral, aroma once you open it. The smell is most apparent when you meet up with someone who has been drinking at most an hour ago.

T: Being marketed as beer for the masses means it would taste something like it (A liter costs something like 70 PHP retail or around 1.20 USD in the PH). Quite sweet and floral when you start drinking with only a touch of bitterness at the end. I wouldn't describe the bitterness a something liken to hops. Eventually the bitter aftertaste of the beer will overpower the overly sweet taste that is initially dominant (after going through 1.5L of it perhaps). Generally poor taste compared to other mass brewed pilsners.

F: Has a very light body and continues to feel as such no matter how much you drink it. Can be drunk as is without snacks or accompaniment for long periods of time.

O: Despite it being the defacto national beer of the Philippines, I wouldn't drink a San Mig at a pub or restaurant given there are other choices. Its overly sweet flavor profile fit well with its target market others might have a different palette. Technically a pretty poor beer but thanks to its drinkability as its own its a popular choice for parties or long talks between friends.

Poured from a 12 OZ bottle into a pint glass at the World of Beer in Columbia, SC. The appearance is a clear, bright yellow color with a small white head. The aroma is mostly grass/grain. The taste is your basic american adjunct lager )corn, grain and grass) . I prefer this in the painted bottle on a hot day in the Philipines than as an import to the States.

DATE: September 1, 2016... OCCASION: detoxing after an intense first four days of school as a second-year supervisor... GLASSWARE: Penn State pilsner... crispy, corny, funky, gassy aroma--not the way to ease into anything... the beer pours a clear pale golden body that offers energetic bubbles upward... the head is really impressive for a beer of this expected quality: thick, arching lacing sits atop a creamy, cavernously spidering web of snow-white head... back to the aroma, some grass elements suggest a light, soft hops... almost off-putting, the type of beer that one wishes would go quietly... this malty offering pounds the throat with sizzle and fizzle, oddly warm and abrasive... medium-bodied, but nothing going on up front.... slightly sweet, more syrupy and slightly carbonated.... a metallic awkwardness impounds the taste buds... this was part of a gift mix six from Judi, so I can never look a gift beer in the mouth...but wow, this lays eggs across the globe... the only cool thing about this is that i now drank a beer from the Philippines...

S: Sweet grainy malts. Some hints of hops, indistinct at this time. A little bit of sulfur.

T: More of the same. Very light grassy hops, some sweet corn and a bit of sulfur on the back end.

O: Meh. It's not horrendous but it's still a struggle to drink. Pretty plain, a bit sickly sweet but just a little bit of hoppiness to help cover that up.

From the bottle, it pours a pale golden with a small head, quickly dissipating. Light scent overall. The taste is similar, light flavor, yet refreshing. Just the thing after a simmering day in the Philippines!

Bottle from a 7-11 in Bangkok, though the label identifies the brand owner as San Miguel Thailand. 5.0% ABV.

Balanced albeit simple, San Miguel Pale Pilsen is a somewhat refreshing light lager decent for pairing with spicy Southeast Asian food, but beyond that it has little to offer the discerning drinker.

Pours a clear, straw color. 1/3 inch head of a white color. Good retention and slight lacing. Smells of pale malt, adjunct, and a hint of hop. Fits the style of a German Pilsner. Mouth feel is smooth and crisp, with an average carbonation level. Tastes of pale malt, slight sweet malt, hint of caramel malt, hint of hop, and adjunct. Overall, average appearance, weak aroma, decent feel, but the best aspect is the body.

Pours clear, bright yellow in color with 1/2 inch head. Taste is corn, grain, grass, and sugary malt. Very sweet--almost like a non-alcoholic beer, with light body. OK to slightly above average example of the style. Perfectly drinkable, but I prefer others in the style.

Bottle from Maruhn. Not bad tasting, just not enough there to enjoy. Taste and aroma are on the weak side, and mouthfeel is watery. A little extra effort could make this a decent lager.