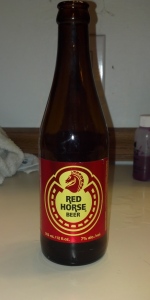 Notes: Red Horse is San Miguel's high alcohol beer brand. Red Horse Beer is a deeply hued lager with distinctive sweetish taste balanced by a smooth bitterness that leads in a strong alcohol kick. The brand's popular rock image is most appealing to male drinkers who are 18-24 years old in the middle and lower socio economic groups.
View: Beers
Reviews: 51 | Ratings: 179 | Log in to view all ratings and sort
Reviews by MasterQ:

Please don't bother with this one if you have an alternative, it's a rather poor strong lager. It is the best beer in the Philippines, but that's not saying much at all. There it comes in 650ml bottles and is far superior to the more dominant San Miguel Pale Pilsener from the same brewery. SMPP is just an insipid pale lager with an unpleasant aftertaste.

In the Philippines, as far as bang for the buck and flavor, this is the one. As in many countries, the one brewery controls most, if not all, of the market. And as in most of southern Asia, all the available brews are sub-par.

Picked up by my buddy Ken in the Phillipines. Poured out of a 12 oz bottle into a pint glass.

A – Poured out a pale golden yellow with almost no head to speak of at all. Very bubbly.

S – Corn, grain, sweet and not much else.

T – Very sweet taste immediately grabbed me. Malty with a touch of citrus.

M – Very easy drinker. Medium carbonation that leaves a bit of that sweetness on your palate as it goes down.

O – Another on of these hot summer days brews in a foreign country type. Its perfectly fine for a beach, boat or humid day. It will go down quick and easy and its at least got some taste.

I guess The Filipino San Miguel is the brand owner (though they're licensing it from San Miguel Spain?) and San Miguel Thailand is technically brewing it under contract.

Aromatic intensity is quite mild.

No overt hop or yeast flavour. No off-notes apart from the almost cloying sweetness.

Imbalanced, with shallow depth of flavour throughout. Flavour duration is brief (luckily). Flavour intensity is low.

TEXTURE: Syrupy, slightly sticky, smooth, wet, overcarbonated. Heavy on the palate. Filling. Not soft at all.

Doesn't bring out the best in the taste.

OVERALL: Drinkability is low giving its sharp overcarbonation, heaviness on the palate, and off-putting sweetness. Definitely amongst the worst beers (currently) available in Thailand - which is a shame since Thai-brewed San Miguel Pale Pilsner (from the same brewery) is one of the best. Not a brew I'd want to revisit - but I imagine I likely will given the lack of diversity in Thailand's beer scene coupled with Red Horse's affordable price and comparatively high ABV.

L:
Golden yellow color, it tops with pretty good white foamy head that retains for some time before sinking to some bubble film atop and leaving small amount of lace, high fizzy carbonation.

T:
Grain and grassy bitterness in the lead, then it follows with hint of lager yeast, bread, and grain again to wrap up all the things.

F+O:
Light body with lively crisp and some active carbonation, not much smooth, finish is dry. Maybe drinkable if there is no choice.

L: Pours brilliant gold under a 1” white foam cap that diddipates at a fairly moderate speed leaving splotchy lace.
S: Fresh grains and some earthiness fill the nose.
T: Lightly sweet bread and a dose of apple with a moderately bitter, dry finish.
F: Medium light to medium body, medium high carbonation, clean and crisp.
O: Probably more apple on the palate than it should have but it works well with the grain flavors and helps hide the alcohol.

Rating it according to style, this malt liquor is better than most American Malt liquors IMO. Meaning it's less nasty but still not good.

Overall - Definitely not one of the better malt liquors.. but I don't really like them in general anyway.